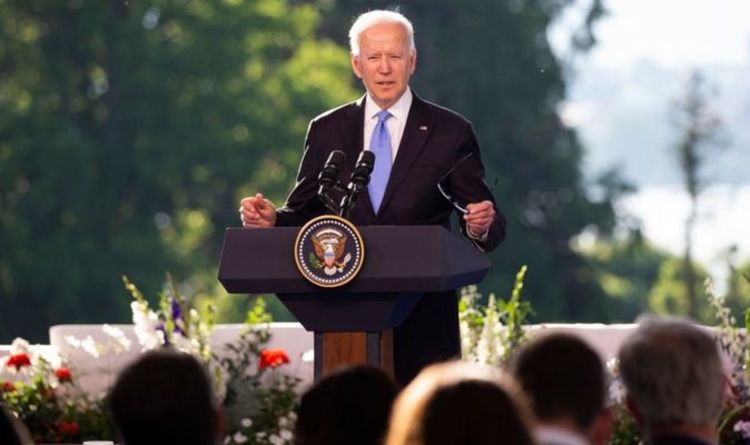 The US President – nicknamed “Sloppy Joe” by rivals for his frequent gaffes – made his latest blunder after holding his face-to-face talks with the Russian President in Geneva earlier today. Nuclear stability, cybersecurity and possible prisoner exchanges were on the agenda as the men sat down for their first meeting in person.

Both sides played down the possibility of major concessions beforehand and it appeared the talks were aimed at thawing frosty relations between the two countries.

Things appeared to be going well for the US leader until his glaring blunder in the post-meeting press conference.

When asked about ongoing disputes in the Arctic between the two countries, Mr Biden said: “I caught part of President Trum… Putin’s press conference and he talked about the need for us to have some sort of modus operandi we dealt with where the arctic was in fact a free zone.”

The 78-year-old American President has been accused of going senile previously – a claim that he vehemently denies.

The pair were photographed shaking hands earlier today in an effort to mend badly frayed ties.

Mr Biden has previously called Mr Putin a “killer” and an “autocrat” and warned him about Russian meddling in Crimea.

The Russian leader hit back saying “it takes one to know one” – alluding to American interference in countries across the globe.

Russia’s alleged involvement in attempted assassinations of a double agent and his daughter in Salisbury and political rival Alexi Navalny have also been widely condemned and led to harsh sanctions on the state.

Mr Biden said he warned his Russian counterpart that there would be “devastating” consequences if the jailed activist didn’t leave prison alive.

He told a press conference: “I made it clear to him that I believe the consequences of that would be devastating for Russia.”

Mr Putin shrugged off the threat – refusing to even mention the opposition leader’s name or guarantee his safe release.

Referring to him as “this man”, he said: “This man knew that he was breaking the law of Russia.”

The Russian statesman later said their three-hour talks had been “quite constructive” and praised Mr Biden as an “experienced statesman”.

Mr Biden responded that Russia is in a difficult situation because “they are being squeezed by China.

“They want desperately to remain a major power”.