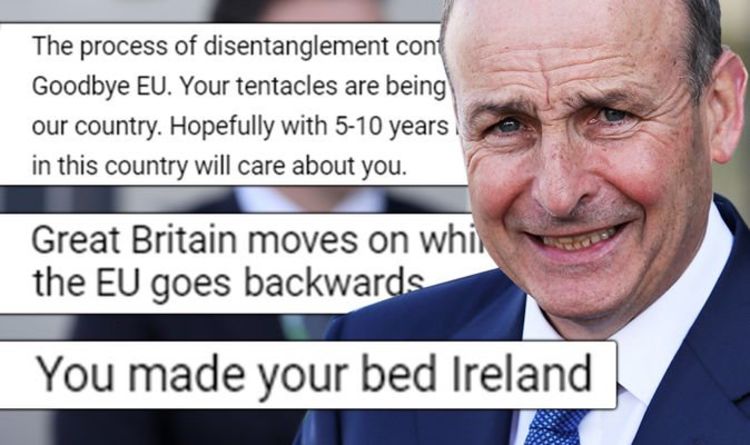 Britain and Australia concluded a major trade deal earlier this week after Boris Johnson met Australian Prime Minster Scott Morrison in London. According to Trade Secretary Liz Truss this will cut the amount of EU beef imported per year by 230,000 tonnes.

Irish farmers are concerned they will lose out due to increased Australian competition.

However reacting to the story Express.co.uk readers were unsympathetic arguing Dublin was obstructive during the Brexit process.

One person posted: “You made your bed Ireland.”

Another added: “Great Britain moves on while the EU goes backwards.”

A third wrote: “The process of disentanglement continues. Goodbye EU.

“Your tentacles are being prised out of our country.

“Hopefully with 5-10 years no business in this country will care about you.”

Other readers urged Ireland to quit the EU and suggested it could join a new UK created common market.

“You know just a trading bloc, without the political power grab stuff going on with endless treaties designed to centralise power and become a federal state.

“We could start with Ireland, there’s a thought.”

Speaking to Chopper’s Politics, a Daily Telegraph podcast, Baroness Hoey suggested Ireland could follow Britain out of the EU.

The former Labour MP was a prominent pro-Brexit campaigner both before and after the 2016 referendum.

The baroness said: “While sort of 15 years ago everyone said we could never leave the EU, I believe that in the relatively short term, the Republic of Ireland will probably decide to leave.

“There’s a big debate starting there. And I think that is the logical thing to happen, that the Republic of Ireland leaves the European Union, now they’re a contributor.”

Britain is currently locked in a row with the EU over the Northern Ireland protocol.

Under the terms of Boris Johnson’s Brexit deal, some customs checks now take place on trade between Northern Ireland and Great Britain.

However this has angered unionists who argue it undermines their position within the UK.

Mr Johnson has urged the EU to show flexibility if they want the protocol to work.