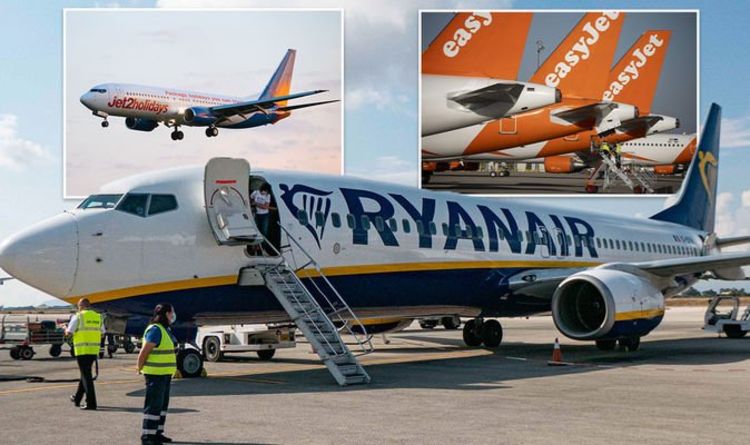 In a devastating blow, last week the Government made the decision to push back its plans for “freedom day” which would see a number of Covid restrictions in the UK eased. Though this did not directly impact foreign travel, it has caused some concerns for the next traffic light review which is anticipated on or around June 24.

A number of airlines have already been forced to cancel flights or holidays following the last green list review.

For holidaymakers who had planned to jet off over the summer, the latest Government announcement could cause concern for their future plans.

What are the latest updates from Jet2, TUI, Ryanair, and easyJet?

Jet2 made the decision to push back its flight and holiday schedule, with the exception of flights operating to Jersey, until July 1.

The Leeds-based carrier had initially hoped to resume holidays from June 24, however, bosses said there was simply not “enough certainty”.

In an updated statement on its website, Jet2 explained: “We’re really looking forward to restarting our holidays and flights programme again from July 1 2021.

“We’re taking the time to get everything ready at our airports, onboard our planes and in our resorts to give you the safest and smoothest holiday experience possible.”

Though the airline is hopeful the ongoing vaccination rollout will lead to “more positive news” for travel, it notes some bookings could face cancellations in the future in line with the “traffic light system.”

For holidaymakers with travel plans to a red list country, Jet2 says it will be cancelling holidays and automatically issuing a full refund.

For amber and green list countries due to depart on or before June 30, with the exception of Jersey holidays, Jet2 will automatically cancel bookings and issue a full refund “within 14 days”.

It adds: “We’ll review the status of destinations on the Amber List following the next UK Government review which we expect to be on or around 24 June 2021.

“We expect the Government to review the status of destinations on the Green List on or around 24 June 2021. If your destination is then on the UK Government’s Green List – we’re looking forward to taking you on holiday.”

Jet2 assures all customers impacted by any changes or cancellations will be contacted directly.

“Please visit our website 14 days before you’re due to depart when we’ll have all the latest official information,” it continued.

“Between now and then, there’s no need to take any action – and we’d recommend that you don’t start arranging things like COVID-19 tests until closer to your time of travel, as travel requirements both here and abroad can change.”

A range of travel plans have now been axed up until July 11.

“All customers impacted by these cancellations will be contacted directly and will be able to request a full cash refund, or to change to a later date or alternative holiday and receive a booking incentive,” TUI explained.

“If we need to cancel any future holidays because of updated Government guidance, we will be in touch directly and aim to give customers at least seven days’ notice.

“We would like to thank our customers for their understanding at this time.”

Ryanair has continued to operate flights throughout the pandemic and has been gradually ramping up its service offering since May.

The airline has not recently announced any major cancellations as a result of the June 21 pushback.

However, the airline is allowing customers more flexibility when it comes to changing their travel plans.

The Irish carrier has extended its no-fee flight changes policy for bookings made before 30 September 2021, for travel before 31 December 2021.

“Our Zero Change Fee promo is applicable for bookings made after 10 June 2020,” explains the Ryanair website.

“Flight changes must take place at least seven days before the original scheduled departure dates to avail of promo.”

The airline is also currently calling for more transparency from the Government on upcoming changes to the traffic light travel list.

Airline boss Michael O’Leary has confirmed the airline is suing the Government, with the backing of easyJet, TUI and British Airways group IAG, as a result.

According to reports, Ryanair and Manchester Airports Group are calling for transparency over the decision of which countries move to the “safe” list every three weeks, and have taken legal action against the Government.

Mr O’Leary said: “We are trying to force the Government to at least either a) be more transparent [over the traffic light system], b) publish what exactly the thresholds are at which international travel will be allowed to restart. Or c) get some injunctive relief against the Government generally on the back of vaccines that says the longer lockdown is restricting people’s freedom of movement.”

He added: “I think [the UK] is going to be embarrassed by the Europeans.”

easyJet has been forced to cancel flights and holidays amid the changing traffic light rules in recent months.

The airline is working in line with the Government’s traffic light system which means red list holidays are cancelled, meanwhile amber list holidays can only go ahead if customers are willing to follow the travel rules in place.

“Holidays to ‘amber’ destinations can go ahead if you’re happy to travel and follow the re-entry steps set out by the Government,” it states.

Green list holidays, which so far only include Gibraltar and Iceland, can also go ahead.

Currently, easyJet’s Protection Promise means customers are given a refund guarantee if their holiday or flight is cancelled. They will be allowed to rebook travel to a later date, request a credit towards future travel or request a full refund.

Customers are also able to change their travel plans up to two hours before departure.

According to the company’s website: “Transfer your flight fee-free this summer, anytime up to 2 hours before your departure to any flights currently on sale and to any destination on our network.

“Applies to changes made up to and including 30 September 2021. Only if the new fare is higher will you be asked to pay the difference.”