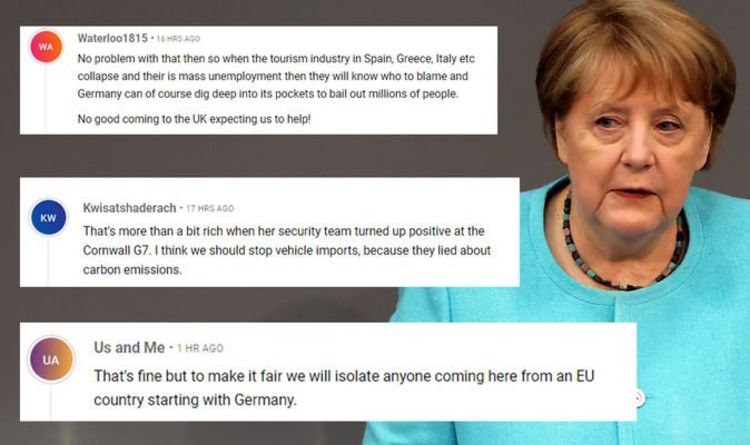 The German Chancellor wants better coordination to fight the spread of the highly transmissible Delta variant that is quickly sweeping throughout the UK and is now making its way through the bloc. Ahead of today’s summit with fellow EU leaders, she told the Bundestag lower house of parliament: “In our country, if you come from Great Britain, you have to go into quarantine – and that’s not the case in every European country, and that’s what I would like to see.”

Following Ms Merkel’s comments, Britons have lashed out at the Chancellor and called for Britain to force EU citizens coming into the country to also isolate.

One Express.co.uk reader said: “That’s fine but to make it fair we will isolate anyone coming here from an EU country starting with Germany.”

Someone else said: “That’s more than a bit rich when her security team turned up positive at the Cornwall G7.

“I think we should stop vehicle imports because they lied about carbon emissions.”

Another Express.co.uk reader commented: “No problem with that then so when the tourism industry in Spain, Greece, Italy etc collapse and their is mass unemployment then they will know who to blame and Germany can, of course, dig deep into its pockets to bail out millions of people.

“No good coming to the UK expecting us to help!”

A fourth reader said: “It’s time we quarantined the EU for good.

“They are certainly not our friends.

READ MORE: Face masks should be worn past lockdown end

Others mocked the Chancellor claiming quarantining non-EU countries will not “spread the virus within the bloc”.

“Couldn’t possibly spread within the bloc could it.”

Ms Merkel previously raged at Portugal as they are allowing British tourists entry without the need to quarantine.

In France, President Emmanuel Macron has allowed those with two vaccine doses in the UK to enter the country without going into isolation.

Speaking alongside European Commission president Ursula von der Leyen at a press conference, Ms Merkel warned the bloc’s failure to agree to a joint travel policy on coronavirus was starting to “backfire”.

She said: “What I regret is that we have not yet been able to achieve a uniform behaviour among the member states in terms of travel restrictions.

“We now have a situation in Portugal that could perhaps have been avoided, and that’s why we have to work even harder on this.

“We’ve made pretty good progress in recent months, but we’re not yet where I would like the European Union to be.”