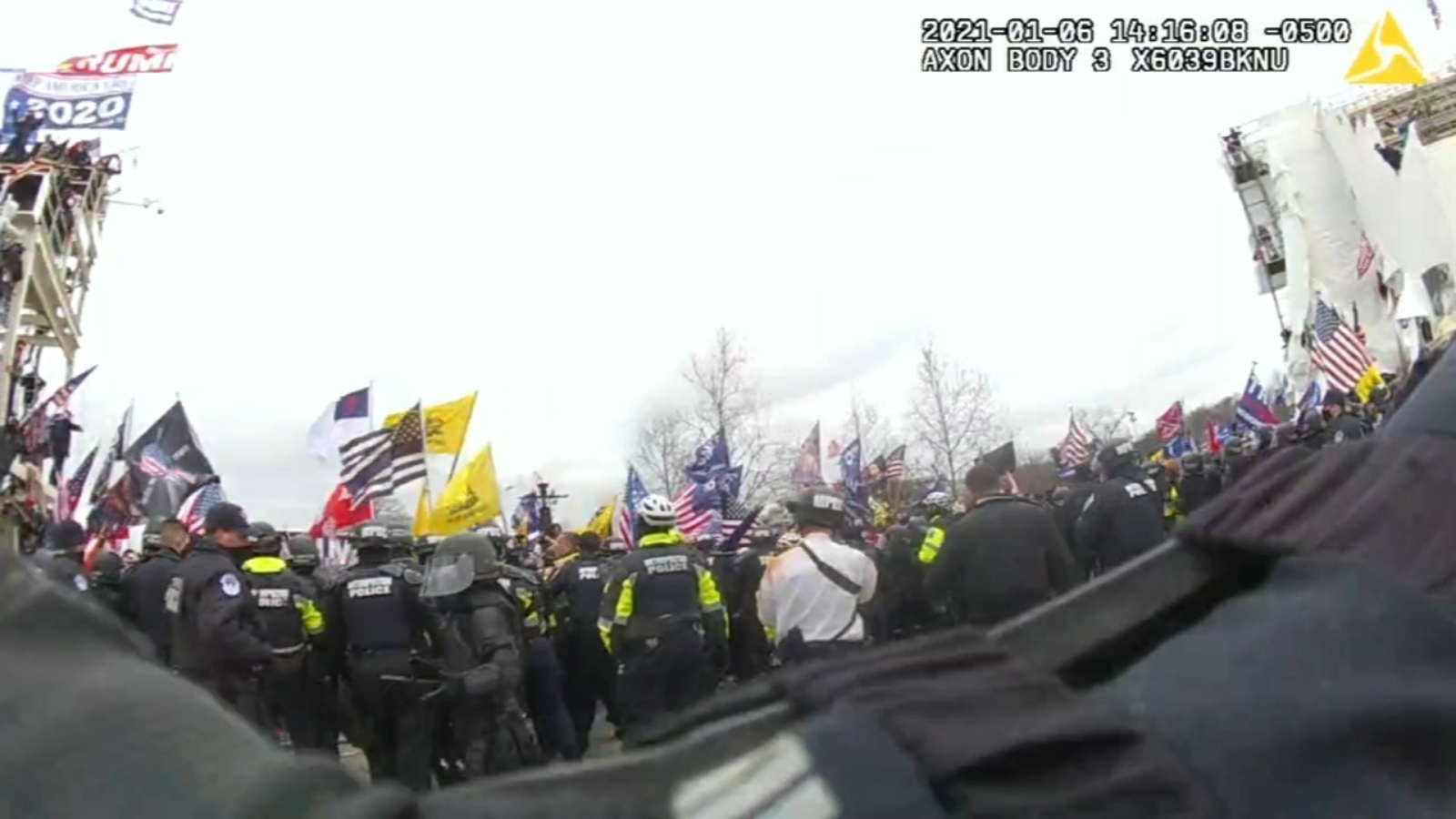 WASHINGTON — The Justice Department released six never-before-seen clips of police body-camera and surveillance footage showing rioters harassing and attacking police on January 6 around the US Capitol.

With several taken from the viewpoint of DC Metropolitan Police officers as they were overrun, the videos are the latest chilling example of how a pro-Trump crowd broke past police into the federal building and disrupted Congress.

While police worked together to protect themselves and the building, hundreds of angry rioters outnumbered them.

Assaulting police is one of the charges the Justice Department has brought against dozens of Capitol riot defendants, among nearly 500 federal criminal cases.

More than a dozen news outlets have spent months seeking access to videos used in court against Capitol riot defendants. Much of the police body-camera footage and surveillance tapes that are now being used in court still haven’t been seen publicly, and judges have just begun ordering the release of tapes used in court in cases in recent days, including the six released on Wednesday.

Another judge on Wednesday in the same courthouse applauded Chief Judge Beryl Howell for ordering video to be released, saying they would show Republican lawmakers how serious the siege was — and that the rioters were far from acting like tourists.

In some of the video clips, police body cameras capture almost an hour of the siege from the officers’ point of view, as police walk through the crowd around the Capitol and the crowd screams insults at them.

Rioters yell at the police “f**king traitors,” “pigs” and “a**holes,” and then a man with a skateboard, who prosecutors say is 21-year-old Grady Owens of Texas, hits police with it.

Owens is charged with six crimes, including assaulting officers with a dangerous weapon, impeding passage through the Capitol and other violence on the grounds. He has pleaded not guilty.

Two more of the newly released clips related to Owens’ case are from an overhead camera in a doorway at the Capitol, showing how rioters continued to push against a police line to get into the building.

In other police body-camera clips released Wednesday, the police line point of view picks up a separate clash where the rioters attacked.

One clip, taken around 2:30 p.m. that day, shows Capitol and DC police officers in a skirmish with a man in a red “Make America Great Again” hat. Police officers then fall to the ground, and the melee continues — with some supporters with their hands up, another wearing a gas mask, an object being lobbed into the air toward police and another man yelling, “Get out!”

Prosecutors say this video captures riot defendant Brian Mock of Minneapolis yelling and shoving a police officer. Mock is also alleged to have kicked an officer on the ground.

In the second clip related to Mock’s case, from four minutes later on January 6, a police officer with a riot shield has been pushed to the ground amid another skirmish with the pro-Trump crowd. The rioters surrounding the Capitol then begin chanting, “USA! USA!” Prosecutors say this showed Mock taking riot shields from officers.

Mock hasn’t been formally indicted at this time. His attorneys have argued he wasn’t assaulting officers — other than a shove and a kick — and instead was encouraging them to leave the scene in front of the Capitol.

One of the officers in the second video bruised his elbow when he fell to the concrete, prosecutors told a judge earlier this week.

A judge in Minnesota, where Mock was initially arrested, had agreed to release him from jail as he awaits trial. But the Justice Department pushed in court over the last week to keep him detained.

Howell, who sits in the Washington, DC, federal courthouse, is still considering whether Mock should stay in jail.

During a hearing on Tuesday, Howell expressed her disgust with the violence of the pro-Trump rioters.

She said she would give “serious consideration to detention” in the case of a person who came to DC to stop Congress’ certification of the presidential election and knocked police officers to the ground. She also cut into the riot as a moment that made the country shudder and made the US “a laughingstock” around the world.