If there’s ever been a pair of videogames that need little to no introduction, whose glowing reputations proceed them to the extent that everyone from tired old pros to fresh-faced newcomers has surely heard of them by this point, it’s the genre-defining Tony Hawk’s Pro Skater and its sublime sequel. The first two entries in a franchise that successfully brought the gnarly world of skateboarding to the attention of the masses before hardflipping itself into mediocrity with a bunch of superfluous sequels, these are, without exaggeration, a couple of the greatest arcade sports games ever made, here remastered and remixed into something very close to absolute perfection by developer Vicarious Visions.

We all know they’re great then — Tony Hawk’s Pro Skater 2 isn’t sat on a Metacritic rating of 98 for no reason, after all — and this revamped collection has been universally lauded on each and every platform it’s been released for thus far, so really the big question here is how does this pair of remakes perform on the Nintendo Switch? Is this port a feeble attempt or a triumphant airwalk? 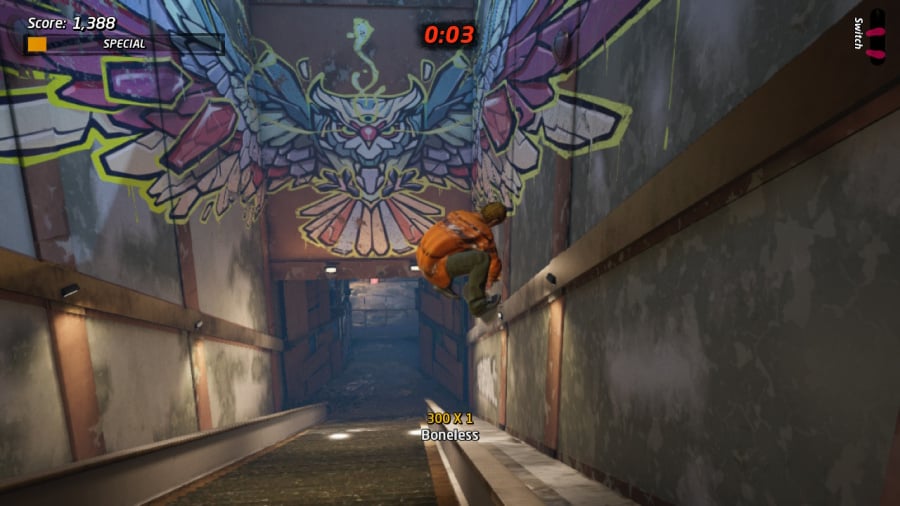 Well, thankfully, Vicarious Visions has managed to pretty much nail the tricky transition from more powerful hardware with a pair of games that look crisp, clean and wonderfully detailed whilst managing to perform at a rock solid 30fps as you kickflip, nosegrind and tailslide your way around their meticulously reimagined levels.

From your humble beginnings learning the ropes in the first game’s tutorial arena to pulling off 360 Varial McTwists on the sunny streets of San Francisco, this Switch edition of Tony Hawk’s Pro Skater 1 + 2 plays a nigh-on flawless game, with nary a framerate stutter or bug encountered in all of our time spent grinding its rails and wall-planting its buildings.

On both a technical and aesthetic level this is a masterful remake of two games that you’d already have been hard pressed to find fault with in their original Neversoft-developed forms. Vicarious Visions has been oh-so clever in what it’s chosen to add, remove, touch up and tweak and the end result is an experience that’s been brought bang up to date for modern audiences whilst remaining absolutely faithful to its roots. The reworked levels here are a sight to behold, once barren arenas that let your imagination do most of the heavy lifting with regards to the finer aspects of their urban settings, they’re now dripping in wonderful little details that help bring them to life like never before. 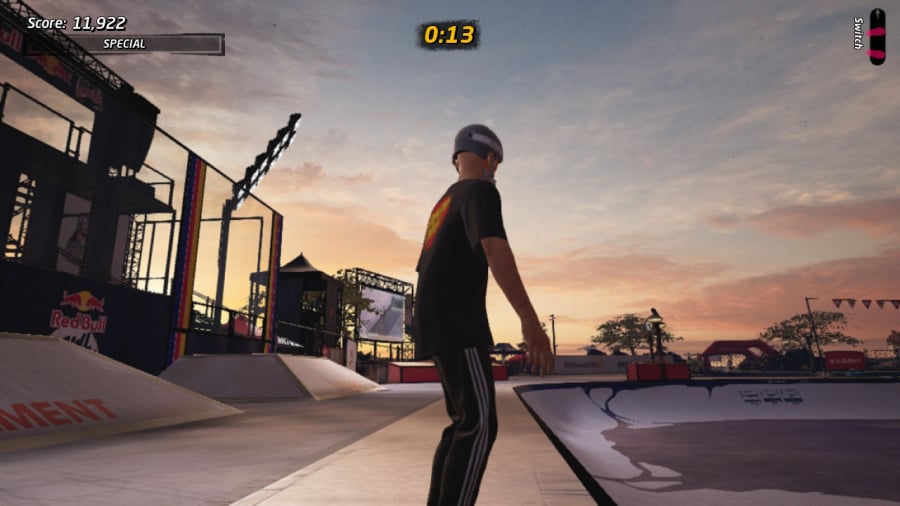 Controls have been tightened up and refined, new music tracks have been carefully selected and added to the already excellent soundtrack and a handful of transformative moves from later entries in the series — reverts, spine transfers and wall plants — have been added into the mix, cleverly altering the gameplay for the better, allowing you to pull off much longer, higher-scoring combos as well as granting you the ability to transition seamlessly through multiple different grinds and trick types in order to put together evermore complex skating sequences on any given run. If you’re an old hand who isn’t interested in any of the new tweaks or refinements noted above you’ve got the option to revert back to classic controls and the more restrictive original move-sets, and newcomers also have a wealth of assists (and cheats) available should they find themselves struggling to get to grips with certain aspects of the game.

There’s been a laudable shift towards more diversity in representation with regards to the roster of skaters here, too. All of the old guard are still present and correct — and looking suitably middle-aged at this point in proceedings — but they’re now joined by a new crop of characters, including Nyjah Huston, Riley Hawk and Leo Baker, the series’ first ever trans, non-binary skateboarder. Any attempt to widen the scope of representation within gaming is something that should be vigorously applauded and it’s great to see such a beloved and long-running franchise planting its flag firmly here. Tony Hawk’s Pro Skater 1 + 2, just like the real world sport on which it’s based is, as it should be, for everyone. 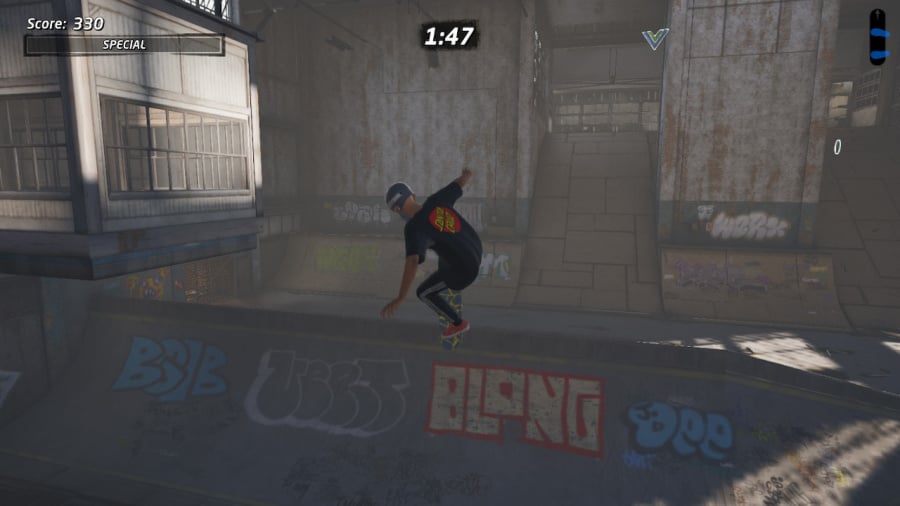 Of course amidst all of the additions and augmentations, the all-new challenges that net you XP to unlock items in the store, the central hub that unifies the two games and gives the whole thing a wonderfully cohesive sense of progression, the newly added skill points dotted around maps and so on, it’s really the underlying mechanics of the skating here that makes these games so very special. Refinements and additions aside, the core gameplay experience in these revamped classics is much the same as it was back in the day and putting together runs across each and every one of the excellent maps here (there really isn’t a full-on dud amongst them), focusing on nothing else for two minute bursts, or picking out routes and examining your surroundings for possibilities is as fiendishly addictive now as it’s ever been. The skating here is just so wonderfully responsive, so flexible in how it allows you to put together endless combinations of tricks and so clever in how it draws you in and slowly transforms you from bewildered beginner to swaggering skate champ.

Jumping into Tony Hawk’s Pro Skater 1 + 2 for the very first time can be overwhelming for newcomers. Arenas are laden with shiny collectibles, littered with obstacles, dangerous ledges and enormous vert ramps, but everything here has been ever so carefully arranged to guide you, to help you master these gauntlets and begin to see your surroundings as opportunities to score big rather than places to break every bone in your body. As you slowly tick off the to-do lists of each area, gathering up golden S-K-A-T-E letters, busting open hydrants, breaking school bells, grabbing popcorn buckets and finding all of those hidden VHS tapes, you’ll get to know these spaces intimately and it’s then that the real possibilities, and the wonderfully freeform scope of these classics, make themselves clear. 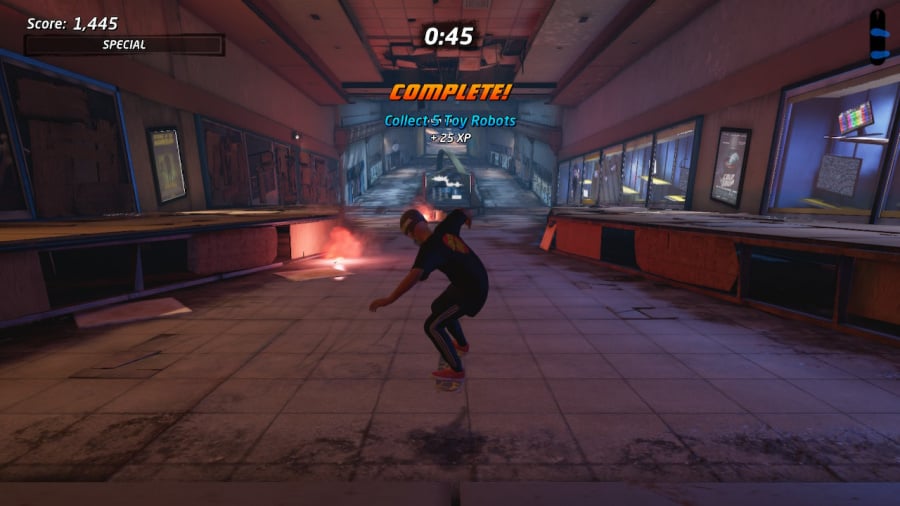 In terms of modes, everything is present and correct on Switch, with the full suite of single player options including both skate tours, ranked and free skate and the wonderfully in-depth Create-A-Park adding potentially hundreds of hours to your estimated playtime. Multiplayer also makes the cut in its entirety with online leaderboards, jams, competitive mode and local split-screen offering chilled out free-skating with friends as well as trick attack, score challenge, combo mambo, horse, tag and more. There’s a robust character creation suite on offer too with an absolute ton of clothes, boards, wheels and customisable bits and bobs for you to get your hands on as you rise through the ranks.

If we did have any complaints here — if we really had to have a grumble — this Switch version, as expected, can’t quite match up to the visuals of other versions on more powerful hardware. Textures can be a little muddy here and there in and around levels. You’ll also often see them slowly deblur and come into focus on items and objects whilst browsing the in-game store. Loading times between levels can be a little on the long side, too (something which, to be fair, is also a niggling problem on other platforms). The in-game camera can also be a tad unruly from time to time, becoming a little bit of a pain in tight corners and small corridors.

Further to this, we can’t yet speak to how well online actually performs on Switch at this present time as servers weren’t available for us to try out the various multiplayer modes, so fingers crossed it all runs smoothly once it starts populating with eager skaters. These small niggles aside, however, this really is an excellent port, a rock solid Switch edition of a stellar remake that brings together two of the very best games we’ve ever had the pleasure of playing. This is a collection we highly recommend you grab a hold of at the earliest opportunity; an arcade sports experience that’s as much fun for avid skate fans as it is for casual gamers just looking for a well crafted and addictive timesink to disappear into.

Tony Hawk’s Pro Skater 1 + 2 on Nintendo Switch is a rock solid port of a pair of genuinely fantastic remakes. These really are two of the very best arcade sports titles of all time, revamped, reworked and re-imagined for modern audiences with all the graphical bells and whistles, collectibles and game modes we’ve come to expect in this day and age. With flawless performance in both docked and handheld modes and visuals that still look the part after a few necessary concessions here and there, this is one collection we highly recommend you kickflip right into as soon as possible.

Delta was the first international flight I took since the Pandemic. This is what you need to know

Canada is a great destination for tourists. Here’s how to get there. Expect