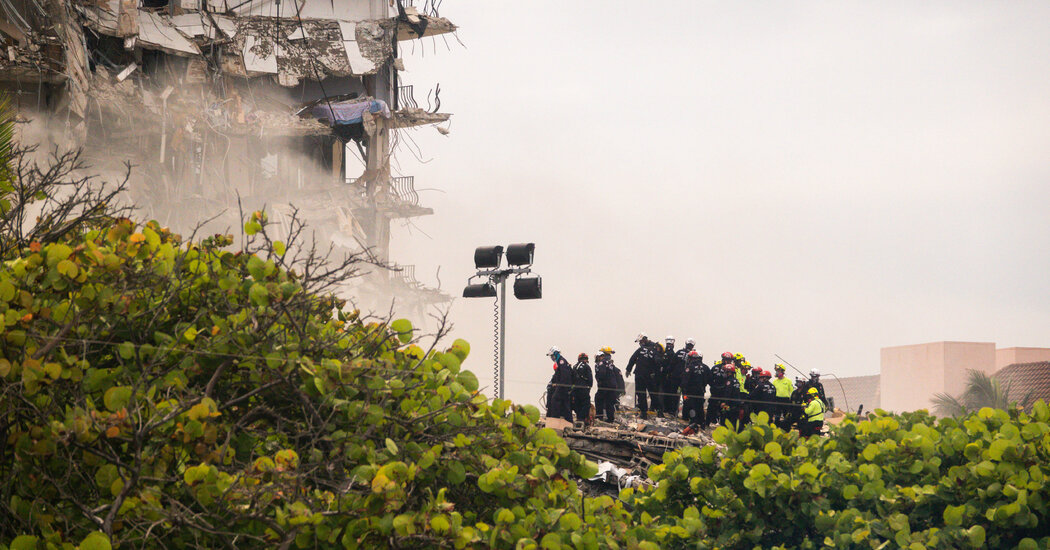 “I got home and made breakfast and slept for maybe five hours,” he said.

For now, anxious families have been relocated from a community center to a neighboring hotel so they could be more comfortable. The authorities planned to brief them every four hours on the search-and-rescue operations.

And survivors continued to share staggering stories of how they escaped harm.

Marian Smeraldi-Lopez, who lived with her family on the sixth floor, said she got out through a stairway.

“No apartments on that north side were visible,” she said. “Just air, debris and rubble.”

Ms. Smeraldi-Lopez, her husband, Alfredo Lopez, and their 24-year-old son, Michael Lopez, grabbed a flashlight, cellphones and eyeglasses and ran out in their pajamas. Dust had seeped in from around the glass doors and windows. There was no electricity. Somewhere, an alarm sounded. The apartment next to theirs, she said, “was gone.”

She and her family stayed close to the wall, inching past an elevator bank. At the stairs, they joined a single-file line of residents streaming down from upper floors. Families called out to keep track of those behind them. In the garage, the water was up to her ankles.

Outside, they climbed over a broken pool deck wall, wanting to reach the beach in case there was destruction from what they still thought was an earthquake: “I was convinced the aftershock was going to happen,” she said.

But when they reached a clearing, she turned around. There was only one section of the building that had fallen, and the buildings around them were unscathed.

The understanding of their plight filled her with dread.

“It was just our building,” she said, “and it stopped at our apartment.”