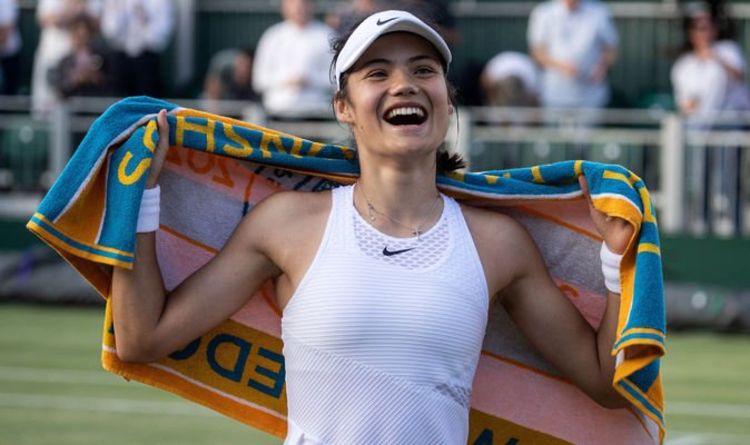 Teenage wildcard Emma Raducanu reached the Wimbledon third round on her Grand Slam debut on Thursday night – and then claimed it was like being on holiday. The Londoner, 18, won her first ever Tour-level match in the opening round just two months after finishing her A Levels.

And on Thursday evening Raducanu, who is world No 338, shocked former French Open finalist Marketa Vondrousova 6-2, 6-4 on Court 12.

“I feel like I am on a holiday,” beamed Raducanu. “It is unbelievable. And I want to stay here as long as I can.

“Playing in front of a home crowd helps, the support is so loud, they are so behind me. I have that in the back of my mind.

“I have tried to play every point like it was my match point or the last point of Wimbledon. I have been playing that trick with myself.”

“I haven’t opened my phone yet and really grateful for the messages,” she added.

“I won’t be able to reply to all of them just yet. When I have downtime and I read those positives messages, it gives me a great feeling.”

Raducanu only sat her A Levels two months ago – and is now guaranteed to win at least £115,00. That quadruples here career earnings until now of £28,754.

And she will bank £181,000 if she reaches the fourth round with a win on Saturday.

Raducanu, whose father is from Bucharest, will now face Sorana Cirstea after the Romanian world No 45 beat Victoria Azarenka for the first time at the fifth attempt on a loud Court 1.

“I have to say I have been a professional since I was 16 years old but this was the best atmosphere I have ever had on a court.

“We have missed the public so much and today they helped me so much. I don’t think I have ever enjoyed a match like this.”

It is the first time since 2017 that four British players – Andy Murray, Jo Konta, Heather Watson and Aljaz Bedene – have reached the third round.