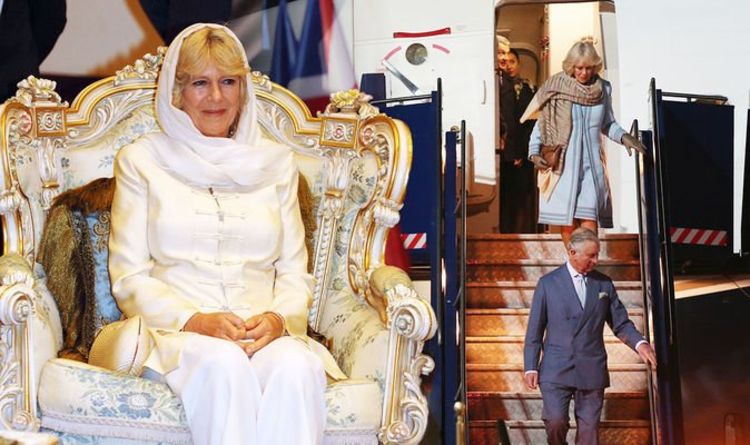 Camilla, Duchess of Cornwall, is a very seasoned traveller yet that doesn’t always mean she doesn’t forget to pack certain items. Yet, unlike the typical traveller, the Duchess need not worry about having to forgo a forgotten garment during her international adventure.

Instead, as one might imagine for a Royal Family member, she has a team of staff both at home and abroad who are on hand to tend to her every need.

According to insiders, in one instance this meant flying a special pair of high heels 3,000 miles after it was discovered they had been left behind.

In 2007, Camilla and her husband Prince Charles jetted off to Kuwait as part of a the-day tour of the Gulf region.

However, upon arrival, the Duchess reportedly discovered she was missing a pair of high heels.

READ MORE: Brits banned from travelling to these 58 countries

“The Duchess did not ask for the shoes to be sent, but a member of staff did arrange for them to be flown over to her after they realised that they had forgotten to pack them,” the spokesperson told the Evening Standard.

“They were not specially couriered, but were sent along with a number of items and paperwork as is often the case on royal tours.”

Of course, this is not the only luxurious luggage treatment that Royal Family members can enjoy.

When jetting off abroad, it is reported that the Duchess of Cambridge’s own garments get some very special treatment.

According to royal insiders, when travelling on private chartered flights, Kate’s dresses have been known to get their own seat.

This is particularly true when flying with haute couture items or garments for special events.

The dresses are draped over seats to avoid creasing which could occur in the aircraft hold.

“When it’s small charter planes and there is space, her clothes do have their own row,” revealed royal correspondent Emily Andrews.

“This happened on a private plane we took in India to Kaziranga National Park.

“Natasha Archer [Kate’s stylist] brought all her dresses on and laid them over an entire row.”

Kate’s team are also clued up when it comes to knowing which garments are suitcase-friendly, and which should be carried in a garment bag.

“All the Duchess or her ‘people’ have to do is familiarise themselves with the best wrinkle-free fabrics,” former creative director of Mulberry, Scott Henshall, told MailOnline.

“Typically synthetic fabrics such as polyester, nylon, acrylic and olefin have a natural resistance to wrinkles and a greater stability since they do not absorb water as efficiently.”