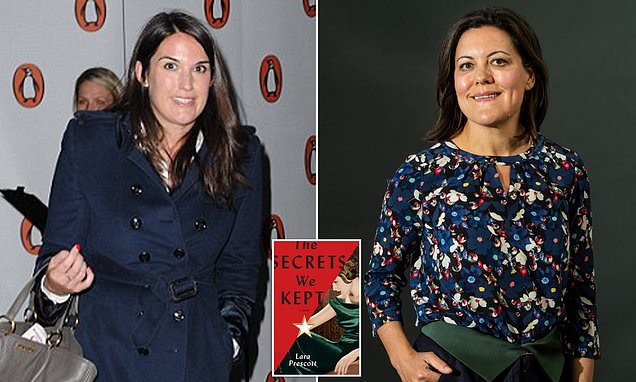 Lucy Middleton, who’s said to be the Duchess of Cambridge‘s favourite cousin and is godmother to Prince Louis, is involved in a bitter legal dispute with royal historian Anna Pasternak.

Middleton is head of legal affairs at publishing giant Penguin Random House, which is being sued by Pasternak over allegations of plagiarism by one of its authors, American novelist Lara Prescott.

Pasternak claims that Prescott, in her bestseller The Secrets We Kept, which told the story of Doctor Zhivago’s publication, plagiarised her book Lara: The Untold Love Story That Inspired Doctor Zhivago. Anna is the great-niece of Russian author Boris Pasternak, who wrote Doctor Zhivago, which was turned into an Oscar-winning epic.

Lucy Middleton (pictured), who’s said to be the Duchess of Cambridge’s favourite cousin and is godmother to Prince Louis, is involved in a bitter legal dispute with royal historian Anna Pasternak

Middleton is head of legal affairs at publishing giant Penguin Random House, which is being sued by Anna Pasternak (pictured) over allegations of plagiarism by one of its authors, American novelist Lara Prescott

Prescott’s literary agent is said to have told Pasternak’s husband, psychotherapist Andrew Wallas, three times that the publisher intended to ‘crush your wife in court’.

At a procedural court hearing last week, the publisher was represented by no less than seven lawyers. And they claimed recoverable legal costs of £1.2 million, which the judge promptly reduced substantially.

Pasternak has accused Penguin Random House of ‘cheque-book litigation’ and wonders if their tactic is to bully her into submission. By coincidence, Pasternak wrote an infamous article for Tatler on Kate Middleton last year, over which the Duke and Duchess of Cambridge threatened to sue the magazine’s publisher, Conde Nast.

Pasternak claims that Prescott, in her bestseller The Secrets We Kept (left), which told the story of Doctor Zhivago’s publication, plagiarised her book Lara: The Untold Love Story That Inspired Doctor Zhivago (right)

The author tells me: ‘I have always felt that Lara Prescott and Penguin Random House were trying to force me out of this dispute by bullying me with cheque-book litigation, and by unnecessarily inflating the cost of it.

‘Penguin has swept in and used its corporate power to try to beat me into submission. Surely the days of the big corporate bully threatening their financial might are now over?’

A spokesman for the publisher tells me: ‘Ms Pasternak elected to bring proceedings, in the full knowledge that they would be defended by Lara Prescott and her publisher, both of whom consider the claim to be unfounded and entirely without merit. At Penguin Random House UK, we have a long and proud history of supporting our authors against unfounded claims and we will continue to do so in this case.’

Duchess of Sussex’s best friend, Jessica Mulroney, has designed a range of women’s suits and shared a photo this week

If imitation is the sincerest form of flattery, the Duchess of Sussex’s best friend, Jessica Mulroney, has paid a huge compliment to Ralph & Russo — the designer behind Meghan’s £56,000 engagement dress.

Mulroney, whose twin sons were page boys at Prince Harry and Meghan’s wedding, has designed a range of women’s suits and shared a photo this week.

But a follower was quick to point out its striking similarity to a suit from Ralph & Russo’s 2018 collection, costing more than £3,000.

But a follower was quick to point out its striking similarity to a suit from Ralph & Russo’s 2018 collection, costing more than £3,000

‘First suit drop. What do you think?’ Canadian stylist Jessica wrote in the caption, which she later edited to include: ‘Inspired by my favourite designers, Ralph & Russo. Without the designer price!’

A spokesman for Jessica, whose husband is the former Canadian Prime Minister’s son, TV host Ben Mulroney, says the image is an ‘inspiration picture’.

Fans are also scratching their heads over how the new suit line is already ‘sold out’ and has a waiting list, even though there’s no clear method of purchase…

Devoted listeners of The Archers were alarmed when veteran character Lynda Snell was involved in an explosion earlier this year which left her with ‘serious injuries’ and nearly claimed her life.

Now, Carole Boyd, who has played the snobby but well-meaning Snell in Radio 4’s rural soap opera since 1986, has revealed she’s been secretly fighting a brave battle against cancer in real life.

‘Doctor theatre takes over,’ Boyd tells Michael Berkeley on a forthcoming edition of the Radio 3 show Private Passions. ‘You have to have this self-survival thing, that you are going to be OK.’

The actress, 74, says her main concern was the well-being of her husband, Patrick Harrison, whom she’s cared for since he suffered a stroke in 2003.

‘My real worry is, ‘Will my health hold out? Will I be OK? Will I go on being OK to look after Patrick, and for how much longer?’

Is all rosy for farmer Jeremy?

Jeremy Clarkson was sacked by the BBC after he punched a Top Gear producer who failed to give him a hot dinner, so perhaps I made a mistake when I approached him as he queued for Vietnamese noodles at the RHS Hampton Court Palace Garden Festival.

And he did seem slightly off his oats, despite the success of his Amazon TV show, Clarkson’s Farm. It documents his efforts to farm 1,000 acres in the Cotswolds. ‘My second series hasn’t been confirmed yet, annoyingly,’ he told me. The motormouth, 61, was with his girlfriend, Lisa Hogan, 47, (right).

‘I’m just looking around for my garden,’ he told me. ‘I’m not very good at flowers, but I’m taking pictures for my gardener. He’ll get them for me.’

The theme of the show is eco-friendly gardening, but Clarkson happily admitted that he ‘sprays [the herbicide] glypho- sate everywhere’.

Well-connected landowner Henry Pelly is embroiled in an astonishing second row with locals over a footpath near his £1.25 million mansion.

He caused uproar in 2016 when he shut the footpath ‘where locals had walked for up to 100 years’ after buying the house in Wiltshire. But following 81 objections, a planning inspector told him it must be reopened.

Now, Pelly’s asked Wiltshire Council for permission to divert part of it, principally to protect his ‘privacy’. Defiant local Katherine Beaumont declares: ‘I have already put in my objection. It belongs to the village.’

The punk drama’s clearly made a big impression on the Burberry model, 20, as she’s transformed her long, brown hair into a 1970s-style blonde buzz cut.

She says she was initially offered a wig to play the part of punk icon Soo Catwoman. ‘I wanted to do something that felt liberating,’ she explains. ‘The day I shaved my head, I changed my life.’

While many celebrities love pontificating about ‘woke’ issues online, Anthea Turner prefers to get her hands dirty.

The former Blue Peter presenter took part in our Great British Spring Clean campaign and has already made Transport for London remove litter and graffiti. ‘Putting something on Twitter doesn’t get much done,’ she tells me.