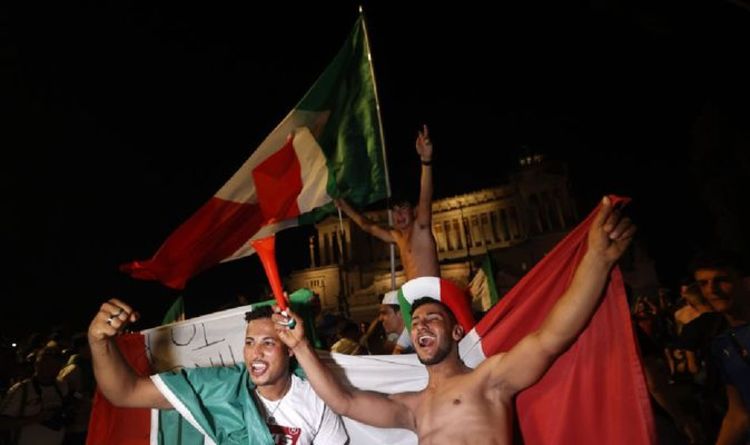 In coverage before and after the match, outlets in France, Italy and Germany were quick to put the boot in. The daily La Stampa sought to stir the Brexit pot, as it claimed the EU wanted the Azzurri to win on Sunday on account of the UK’s departure from the bloc. The paper suggested Presidents of the European Commission and the European Council were among some of the big hitters in Brussels cheering on the Italians.

French paper L’Equipe published a report suggesting 69 per cent of French fans would be supporting Italy.

The Three Lions were cruelly denied their second major trophy on Sunday, succumbing to defeat against Roberto Mancini’s steely side.

The game went to penalties after finishing 1-1 after extra-time in a pulsating contest.

The Italians held their nerve, as they won a dramatic penalty shootout 3-2, leaving Gareth Southgate and his players distraught.

However, there was not much sympathy from Germany’s top tabloid, Bild Zeitung.

Its top story had a photo of Kalvin Phillips trying to console a disconsolate Bukayo Saka, after his decisive miss.

The first line of its headline was written in small letters and said: “Italy beat England.”

Then the second line ran in bold letters: “OF COURSE ON PENALTIES.”