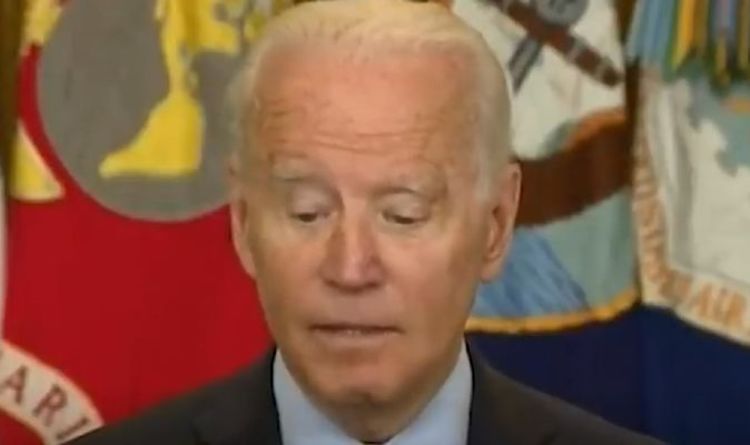 US President Joe Biden spoke to reporters at the White House on Thursday regarding withdrawing American forces from Afghanistan. During his answer on why the US invaded Afghanistan, he paused which sparked concerns regarding his memory. In 2002, Biden was one of 77 senators who gave President George W. Bush the authority to begin his mobilization into the Middle East via the Patriot Act.

President Biden said: “I was up in that pass when Osama Bin Laden allegedly escaped out of harm’s way.

“We went to Afghanistan for two reasons, one for…”

Mr Biden then looked down and paused, seemingly trying to remember the reason.

He then continued: “One, to bring Osama Bin Laden to the gates of hell, as I said at the time.

“The second reason was to eliminate Al Quaeda’s capacity to deal with more attacks from the US in that territory.

“We accomplished both of those objectives, period.”

President Biden is known to have struggled with a stutter since childhood, an issue he admitted still causes him problems when “really tired.”

Many have defended the President and insisted that his gaffes as President are due to him still fighting his stammer.

President Biden submitted himself to testing in the early stages of the presidential campaign and passed.

A health assessment from experts at The George Washington University in 2019 classed the President as “healthy” and “vigorous.”