Out of Line really could have been so much more. Developed by Nerd Monkeys, it’s a puzzle platformer that feels like a riff on earlier modern classics such as PlayDead’s Limbo and Inside; it’s a linear experience that features action set-pieces and copious puzzles to drive its narrative, but never really capitalises on either, resulting in an experience that is pleasant to behold on your first playthrough, but ultimately ends up being rather forgettable.

You play as San, a cute, spear-wielding character who is on the run after escaping what looks to be a sinister-looking factory (no, we’re not in Oddworld here). Right from the start, San’s motivations and objectives – and indeed the wider narrative – feel intentionally vague and abstract, but certainly to the game’s own detriment. From beginning to end, you’re never quite aware of what’s going on, who the characters are, and what your end goal ultimately is. It’s clear that the developer has leaned on the aforementioned Inside for narrative inspiration, but the plot in Out of Line just feels a bit too vague for our liking. 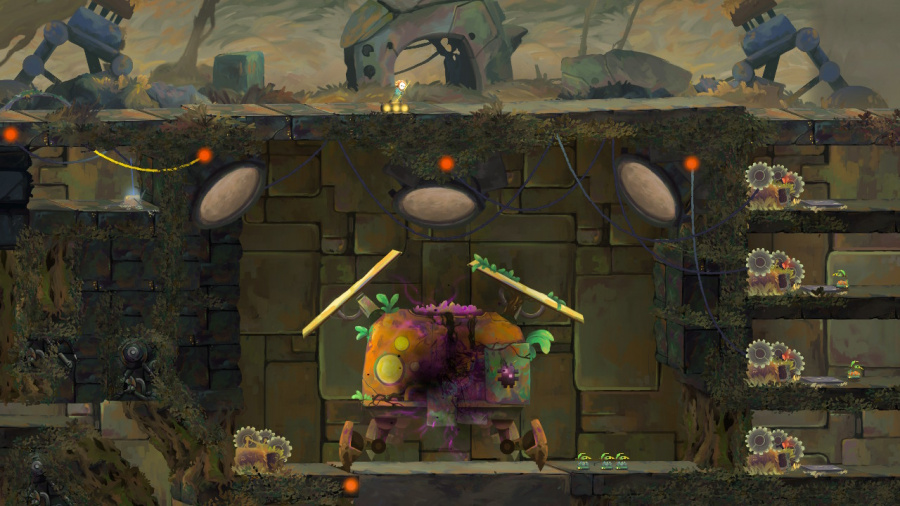 As you progress through the game, you’ll encounter other beings who appear to be on the same path as San; some of which even look exactly like San, suggesting that the protagonist is one of many clones. Frustratingly, the interaction between characters is limited to a simple smile and a wave, so there’s no dialogue whatsoever to provide context to the plot.

Thankfully, the gameplay fares a bit better. At its core, Out of Line is a puzzle game, with the majority of puzzles requiring use of San’s spear. Although it’s not big enough or sharp enough to damage enemies, the spear is a remarkably versatile tool that helps with both traversal and operating machinery. Initially, you’re taught to throw your spear with either ‘ZL’ or ‘ZR’; hold down to aim, and release to throw. You can then call your spear back into your hand with a tap of the same button.

At the start, the spear’s primary function is to act as a makeshift platform, effectively springing San up to higher, out-of-reach ledges. You simply throw the spear into a wall, jump on and bounce up to your destination. Later in the game, this functionality is expanded to include ropes, allowing you to chuck your spear to a distant platform to create a makeshift bridge. This feels particularly intuitive, and we wish this feature was present much earlier in the game, but sadly it’s only introduced during the latter portion of the campaign. 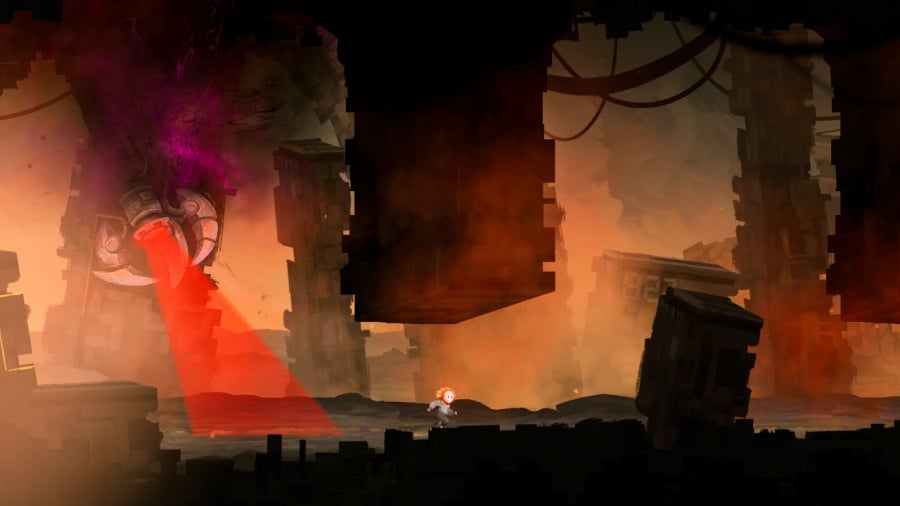 Aside from traversal, you can also use your spear to directly manipulate machinery. By jamming the spear into designated blocks, you effectively turn it into a lever which you can then pull left or right. This impacts nearby platforms, gears, and valves alike, which is vital for solving puzzles and conquering obstacles. After a certain amount of time, you’ll also have access to disposable spears in addition to your own, so you’ll need to use two or even three at a time, darting between them to move various platforms at once.

Disappointingly, most (if not all) of the puzzles are a bit of a cakewalk. They start off easy and the difficulty curve is incredibly gradual right up to the end of the game. To exacerbate this, the puzzles rarely deviate from the same structure; move a gear into place, jump on a platform, throw a spear into the wall, etcetera etcetera. There’s very little variation, which as a result renders a lot of the puzzles rather forgettable.

It’s a good thing, then, that Out of Line is a visual treat. Its environments, while not particularly varied, look excellent with a hand-painted style that oozes originality. The characters, too, are well realised; throughout San’s adventure, they are hounded by robotic claws that feel genuinely intimidating. They’ll smash through barriers and let out blood-curdling screams, with animations that certainly suggest sentient personalities. You’ll encounter these machines during scripted events, in which you’ll need to outpace them and reach safety, often just in the nick of time before they’re able to grab you; again, very similar to Inside. 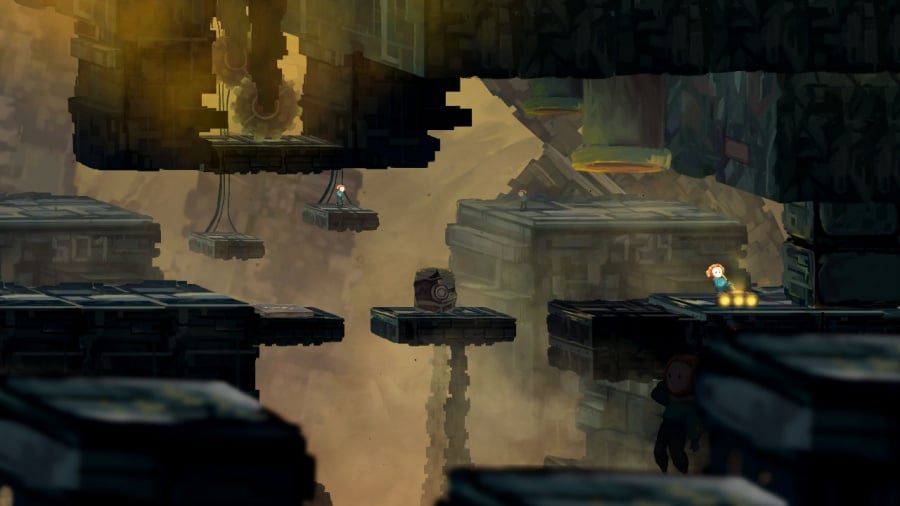 Ultimately, Out of Line feels very much like a ‘proof of concept’ rather than a fully-fledged adventure. At just 2 hours in length, it feels like missed potential; just as the puzzles start to get a bit more interesting, the game just… ends. It’s a shame, but on the flip side, it makes us excited to see what Nerd Monkeys comes up with in the future, should it decide to make a sequel.

Out of Line tries to straddle the line between being an emotional narrative-driven experience and a consistently engaging, challenging puzzle game; unfortunately, it struggles to accomplish either. Far from a bad game, we’d absolutely recommend Out of Line for the younger audience who may want to dip their feet into the puzzle platform genre, but for those seeking something a bit more taxing, then you might be better off looking elsewhere.