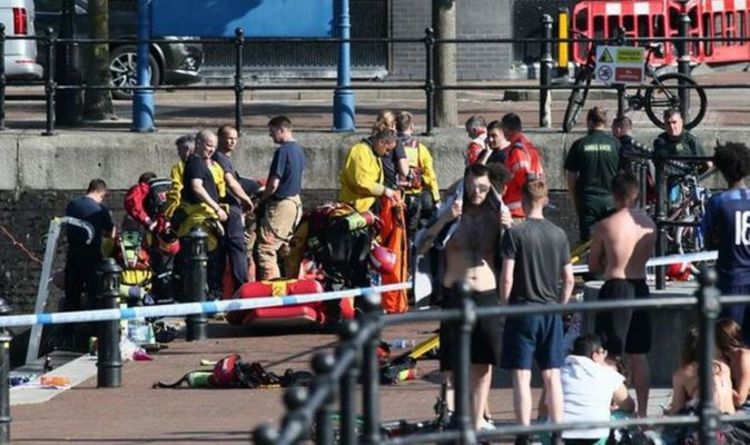 It came after there was a widespread search for the missing teenager earlier today. Despite being warned about the dangers of swimming in the quays many people still flocked to the area as temperatures hit over 30C in the north west.

Police were called at around 4.40pm and recovered the unnamed man’s body from the water around three hours later.

The 19-year-old hasn’t been named and an investigation is underway into the death, with a file being passed to the coroner.

Announcing the sad news, the force tweeted: “Sadly, despite a rescue operation at Salford Quays this evening, a 19-year-old man has lost his life.

“Our thoughts are with this young man’s family and friends, and the people who witnessed the tragic events.”

Detective Inspector Helen Bagnall, of GMP’s Trafford district, said: “Firstly our thoughts are with this young man’s family and friends, and the people who witnessed the tragic events.

“Sadly, this proves how dangerous going into unfamiliar water can be, especially when you can’t see below the surface of what could be very cold water.”

Many people claiming to have witnessed the tragic incident voiced their concerns about there being no lifeguards stationed at the quays.

One person tweeted: “This was horrifying to witness. Please work with the council to have water supervision during this hot weather.

“I am from Belfast and they have the rescue service, lifeguards along the water every year after a big music festival.

Another person tweeted: “This is so sad. But what is even sadder is that after this had happened, there were still lots of people jumping in the canal.

“Salford and Greater Manchester Police were trying to move people on and asked for a bit of privacy and were getting loads of abuse. So sad.”

A third wrote: “This is so sad. I see everyone enjoying themselves in the quays every weekend when the sun is shining.

“Just take care everyone when you are in the water. You never know what’s underneath. RIP my friend.”