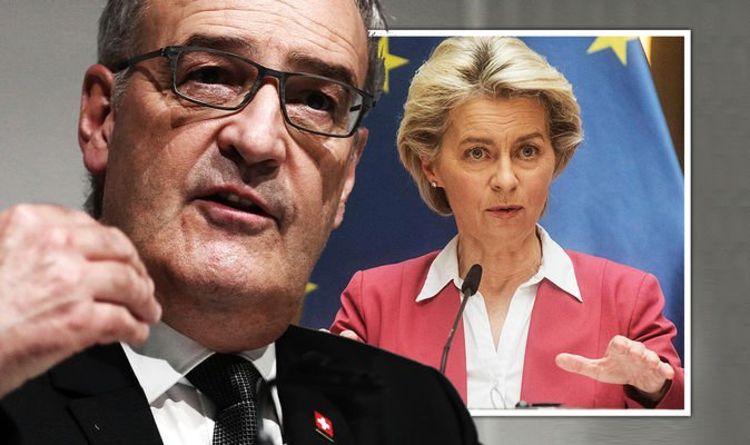 The latest research deals a blow to EU bosses who are keen to bring the land-locked European nation into the fold. A survey showed 64 percent of Swiss participants are against joining the bloc while 58 percent backed their government’s decision to break off talks with Brussels in May.

Just one in five of those surveyed opposed politicians’ decision to end the talks.

The Swiss walked out on seven-year negotiations claiming the terms of the deal tabled by the EU were simply unacceptable.

Ignazio Cassis, the country’s foreign minister, said the requests made by him and his colleagues were “not met”.

Brussels responded with a warning, saying Switzerland risks losing its “privileged access” to the bloc’s markets.

The non-member state is the bloc’s fourth-largest trading partner and its economy is closely integrated with the 27 countries that are part of the EU.

Citizens in Switzerland and throughout the bloc enjoy a mutual right to free movement.

Two months after negotiations crumbled, a poll shows Switzerland’s population is not keen on the idea of becoming the 28th member state.

Just four in 10 of those surveyed said they would like to see fresh discussions on joining kick-started between Bern and the EU, according to a poll carried out by research institute Marketagent.com.

The EU serves as the largest trading partner for the Swiss, with its exports making up 5.2 percent of the bloc’s imports.

The Swiss are famed for their watch-making skills and the globe’s largest manufacturer, the Swatch Group, is based in the town of Bienne.

The survey comes just weeks after Brussels threatened to kick Switzerland out of the European electricity market as relations continued to sour.

With no deal to join the bloc insight, the Swiss will not be able to participate in the bloc’s so-called power-market coupling.

As a result, large-scale power outages remain a real but minor risk in the Alpine country.

Switzerland plays a key role in the EU’s electricity scheme through the clean energy it produces and the power that passes through its borders.

More than 1,000 people in German and French-speaking parts of Switzerland took part in the survey.