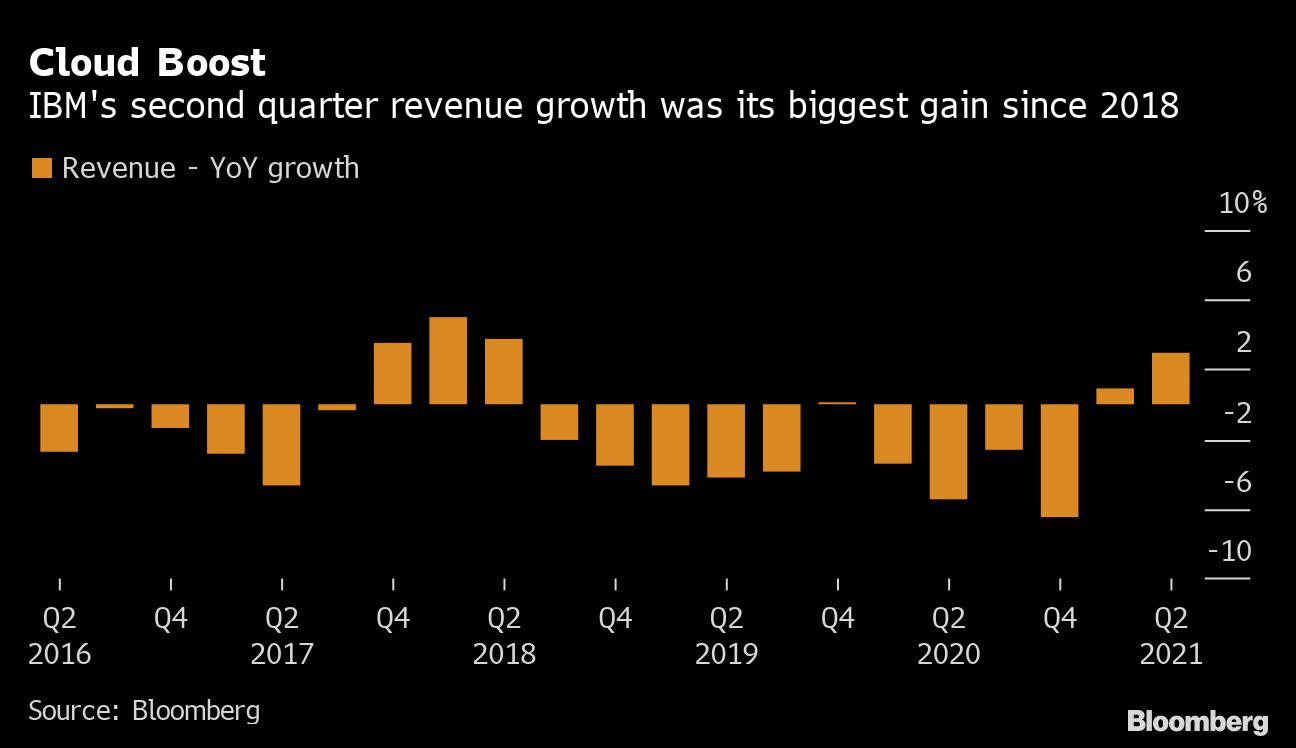 (Bloomberg) — International Business Machines Corp. reported its biggest increase in revenue in three years on the back of strong cloud-computing demand, beating analysts’ estimates and signaling Chief Executive Officer Arvind Krishna’s pivot to the fast-growing market is starting to pay off. The shares jumped as much as 4.3% in extended trading in New York.

Sales rose 3.4% to $18.7 billion for the three months ending June 30, the Armonk, New York-based company said Monday in a statement. That was well ahead of the $18.3 billion analysts had forecast, on average, according to data compiled by Bloomberg.

Krishna, who took over as CEO at the height of the pandemic, has worked — even before taking the top job — to steer Big Blue into cloud and artificial intelligence in an effort to modernize the company. IBM has struggled to revive revenue growth in recent years as its once-core businesses, which traditionally focused on mainframe computers and information-technology services, have stagnated as companies shift more of their operations to the internet.

IBM completed its purchase of Red Hat for $33 billion in 2019, the first step in a shift to what it calls hybrid-cloud, which allows companies to use a combination of their own data centers and computing resources leased from others and accessed online. The company’s rivals, including Microsoft Corp. and Alphabet Inc.’s Google, have also been moving to expand the use of artificial intelligence for cloud-computing customers across a variety of industries.

The company will have to convince investors it can continue its trajectory without Jim Whitehurst, who stepped down as president earlier this month. Whitehurst was the former CEO of Red Hat and played a key role in Krishna’s hybrid-cloud strategy. IBM said Whitehurst would continue working as a senior adviser.

Revenue gains in the second quarter were boosted by IBM’s Global Business Services and Cloud and Cognitive Software units, which saw sales increase by 12% and 6%, respectively. Meanwhile, the Global Technology Services unit, a large portion of which is on track to be spun off by year’s end, showed almost no gains in revenue. The new company will be called Kyndryl and be based in New York.

Total cloud revenue grew 13% compared with a year earlier to $7 billion with Red Hat sales surging 20% during the quarter. IBM reaffirmed its prior outlook of delivering revenue growth for the full year. “We are pleased with the early signs of progress,” Krishna said on a conference call of the company’s shift to cloud and AI. “However, it will take time before we realize the full benefit of these changes.”

Under Krishna’s tenure the company has gone on a spree of acquisitions. IBM spent about $3 billion in the first half of this year to bolster cloud and AI capabilities, according to Kavanaugh. In April, the firm said it would buy Turbonomic Inc. in a deal valued at as much as $2 billion, and acquired Italian process mining firm myInvenio. Most recently IBM bought Madrid-based Bluetab Solutions Group in an effort to extend its reach in Europe and Latin America.

(Updates with CEO comments in the eighth paragraph.)