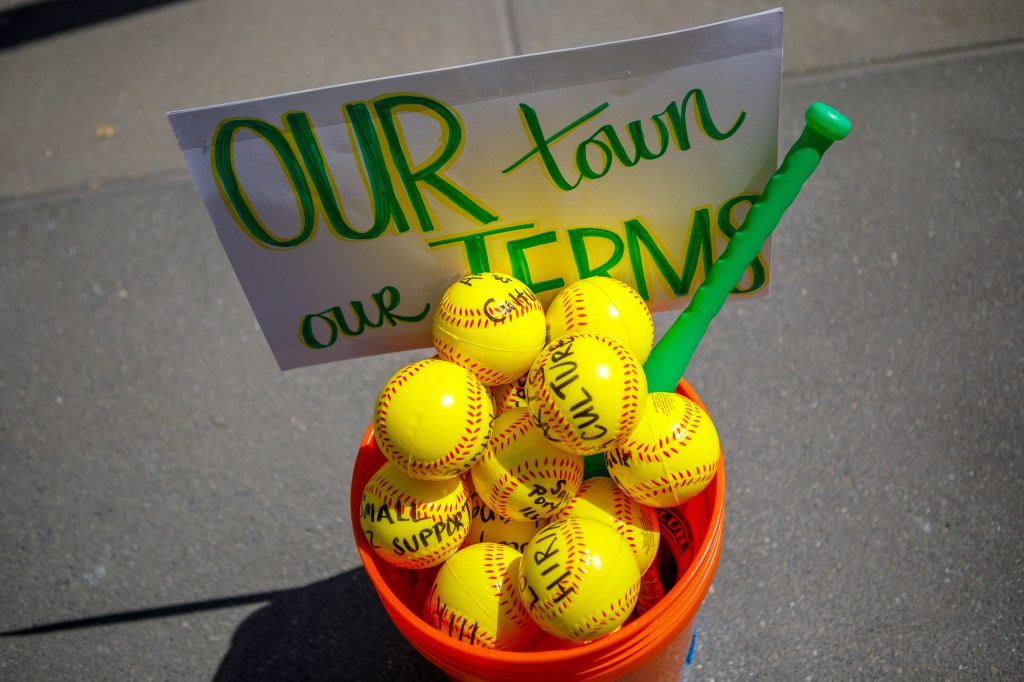 Submit your letter to the editor via this form. Read more Letters to the Editor.

Plenty of cause to save
port, say no to stadium

Yesterday I got a slick flyer from the Alameda Labor Council in support of “yes to Howard Terminal.” The jobs to build this ballpark will go away, but the damage to the Oakland Port and surrounding environment will not.

We need to learn not to despoil our environmental treasurers. We must learn not to build in areas where “sea-level change” is eventually going to take the coastline back. We’ve done enough to ruin California’s coastline.

Oakland City Council should say no to this proposal.

As a former Bostonian I can remember the Red Sox threating to move in 1967 unless a new stadium was built. The Massachusetts Legislature voted  not to support it and the Red Sox did not move.

The Oakland City Council should hold firm and strike an equitable deal. I do believe, based on the current sad state of disloyalty toward fans, that if the As do not get what they want, they will move.

Oakland offer to A’s
is a very fair deal

Daniel Borenstein’s column (“If A’s leave Bay Area they will have only their greed to blame,” Page A1, June 18) about the Oakland A’s is spot-on.  Oakland officials have offered a very fair deal for a Howard Terminal ballpark development, but the A’s appear to be motivated by greed. I would take it a step further — they are trying to press Oakland to agree to a deal that is absolutely not in the public interest that the City Council was elected to protect. Worse, they appear to be plotting with Major League Baseball in their efforts.

It is very telling that they have jointly declared there is only one “viable” site in Oakland, yet there are 20 sites in Las Vegas, including about a dozen they have evidently not even seen yet.

Oakland officials and residents certainly do not want the A’s to leave, but if it happens it will be absolutely the fault of the A’s, not the city of Oakland.

The Alameda County tax collector’s office needs to seriously consider upgrades to its data systems or to its integrity.  We, the taxpayers of Berkeley, are not sure which.

Local open homes offer examples of tax collection disparities. A South Berkeley home has been paying tax on an unfinished basement for years. Two North Berkeley homes do not pay tax on their basements.

Voter-approved parcel taxes are to be imposed on the square footage of each dwelling unit. The revenues support city services like schools, parks, libraries, the fire department and paramedics. Arbitrary and nonuniform imposition of tax is unacceptable.

Eleven harmed homeowners in South and West Berkeley have asked to be treated the same as homeowners in North Berkeley, who are not taxed for unfinished space.

Trump squanders chance
to save his own voters

Can someone please explain this to me: I don’t understand why the Republican Party is avoiding the COVID vaccinations.

President Donald Trump, their fearless leader, almost single-handedly brought the vaccinations in way ahead of schedule. He was taking victory laps based on his ability to motivate private companies to step up and do battle for the common cause. He’s taken every opportunity to bask in the sunshine of his own brilliance.

So I wonder why a huge portion of his followers choose to ignore his great accomplishment and stay unvaccinated. I also wonder why the fearless leader himself doesn’t get on television and promote the vaccinations.

If all of his followers die from COVID, there won’t be anyone left to vote for him.

The cartoon appearing in the July 15 edition of the East Bay Times (Page A6) implying that voting Republican is against democracy is an insult.

I’m a registered Republican and Army veteran who pledged to fight for democracy. Only an extreme partisan would demonize me and half the voters in this country.

I continue to read Marc Thiessen’s column to take in an opposing point of view. But his latest thoughts have veered off into fantasy land. The proposition that memories of all the things disliked about Trump will fade by 2024 due to his ban from social media is sheer lunacy. My memories dating back prior to 2020 are indelible.

The new Child Tax Credit (CTC) monthly payments started on July 15th. Most families will now get an extra $250-$300 from the IRS each month to help with rent, food, childcare and medical costs. If you did not receive a payment, go to www.childtaxcredit.gov to see if you qualify.

This new CTC is a game-changer, potentially cutting child poverty by almost half over the next year according to estimates by the White House. President Joe Biden said, “This can be life-changing for so many families.”

But the CTC improvements, along with much-needed changes to the Earned Income Tax Credit (EITC) for low-wage workers, will expire after a year. We cannot lift millions of American workers and children out of poverty only to force them back into poverty a year later. Congress must make these provisions permanent.

Get Morning Report and other email newsletters