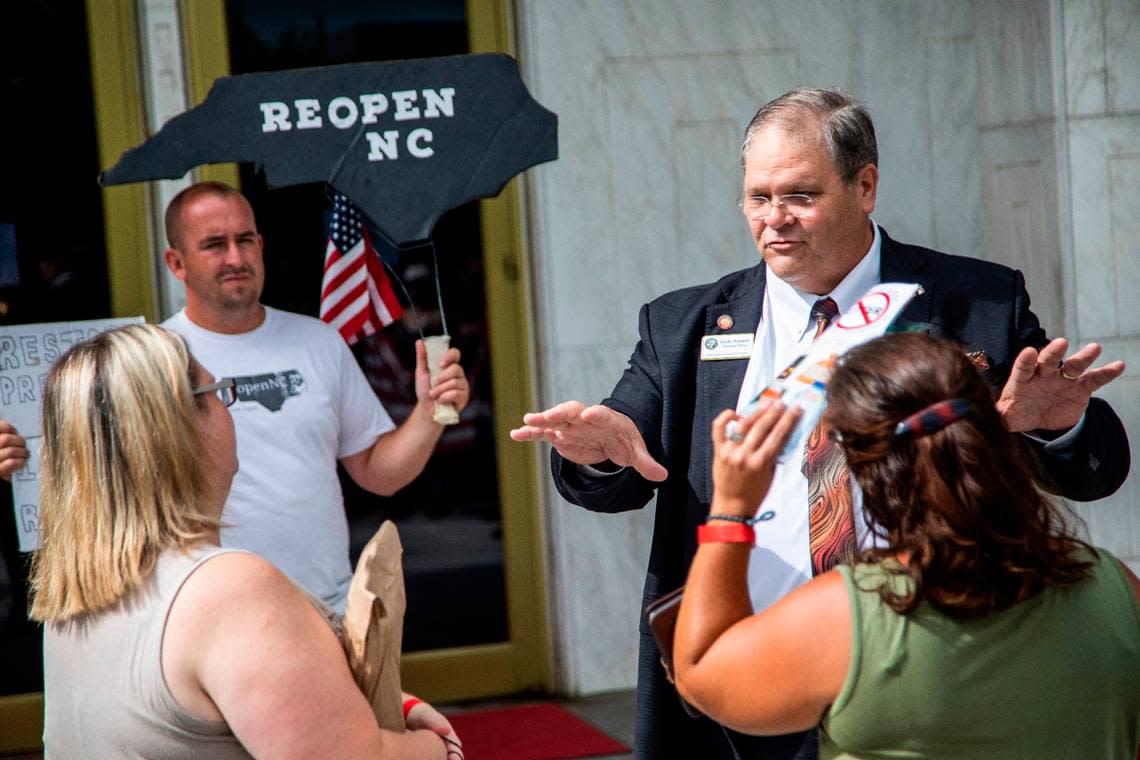 Regarding the N.C. GOP wanting to inspect voting machines… Perhaps people would not contact Rep. Keith Kidwell’s office with concerns about the election if Republicans across the country did not tell them the election was stolen. Donald Trump started complaining about a stolen election months before the actual election and very few Republicans dared to tell the truth. So if people are “concerned” and angry, Kidwell should be resolute enough to tell them the truth: It was the safest, most secure election in years.

The writer is a retired N.C. Superior Court judge.

The Texas legislature is under the mistaken idea they pass the laws for Texas. They’re wrong. What they do is pass some form of what they want law to be. The law is what the courts say it is, especially the U.S. Supreme Court. The Texas Democrats should go home, vote “no” on the election bill, and if it passes go to the court for a decision as to whether or not the bill passes constitutional muster. Right now it appears some of the Texas Democrats do not understand their role in the overall process.

I’m a lifelong registered Republican voter disturbed by the GOP’s elitist push for censorship. From the manufactured outrage over Critical Race Theory, to tortured justifications for unconstitutional voter suppression legislation, Republican conservatives are showing themselves to be thin-skinned, intolerant and frankly ignorant about the basic ideas of what makes America great.

This reflexive obedience to elite authoritarianism by millions of Christian Republican conservatives didn’t start with the Trump administration. Sadly, it doesn’t look as if it will end with it, either. The majority of patriotic Americans must stand vigil against this tide of repression and fear.

The writer’s daughter died in 1994 in a speeding-related wreck.

Highway Patrol Trooper Ray Pierce stated that “It’s kind of a testament that if you’ve been pushing that speed limit, it will catch up with you.” Pierce should have added that tragically, the catching up part all too often comes with the loss of an innocent person’s life at the hands of a habitual speeder. How many more innocent lives are going to have to be lost as a result of North Carolina’s failure to give the courts, and its legal system, the tools to aggressively combat destructive driving?

Reality check! We have all seen them, the COVID-19 decliners turned COVID-19 patients on TV, telling their stories after spending weeks or months in the hospital — some having had lung transplants, some suffering long term COVID, most requiring medical care for who knows how long.

The vaccine is free, the extreme medical care is not! America is not discussing the cost of this medical disaster.

Many of the Americans declining vaccines are conservatives, fiscal conservatives. Conservative cable and online spreaders of alternative facts should think about the fiscal costs. Perhaps the only thing some people might relate to is dollar signs. Nothing else seems to be waking them up as the Delta variant takes over.

Just this week we see continuing record drought in the West, wildfires, a fourth heat wave bringing 100-plus temperatures to the upper Midwest, floods in the Northeast, monsoon rains and flash floods in the Southwest, devastating floods in Western Europe killing hundreds — and it’s barely hurricane season.

This crisis is killing people and causing a economic hardship for individuals, communities, states and our country. Governments should provide massive support for the research necessary to find solutions through innovative approaches to save us.

Waiting for the private sector to do this will not be fast enough.