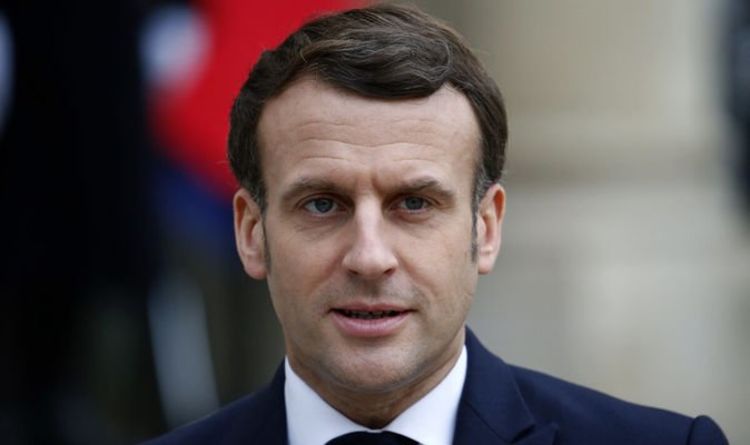 The controversial poster was put on display in Toulon over the weekend following widespread protests against mandatory COVID-19 vaccines and health certificates. The provocation depicts Mr Macron with a Hitler-esque moustache while wearing military uniform.

It is also accompanied with the slogan: “Obey, get vaccinated.”

Michel-Ange Flori, a prominent critic of President Macron and creator of more than 300 public billboards, is said to be behind the latest bitter attack on the government, French radio station France Blue reports.

The backlash comes as the French government announced mandatory vaccinations for all healthcare workers.

Doctors, nurses and administrative staff need to be inoculated against the virus by September 15 or they risk losing their jobs.

Last week, President Macron also confirmed from July 21 the public will have to provide proof of vaccination, immunity or a recent negative test in order to gain entry to public places such as trains, cinemas and restaurants.

The decision triggered widespread demonstrations across the country on Saturday, with many protesters arguing their freedoms were at risk.

Marches were seen across some of France’s largest cities, including Marseille, Lyon and Lille.

Speaking over the weekend, French prime minister Jean Castex said vaccination, which is not currently mandatory for the general public, is the only way to fight the virus.

He said: “I hear the reluctance that arises but I think that we must at all costs convince all our fellow citizens to be vaccinated.

“It is the best way to cope to this health crisis.”

France has also tightened its rules for unvaccinated travellers amid a surge of the Delta variant, which was first identified in India.

“But we’re going to extend the health pass to the maximum, in order to push a maximum of you to go and get vaccinated.”

More than 20,000 people booked their jab within hours of his address.

Some 55.5 percent of the French adults have had a single dose of a vaccine as of Saturday, and 44.8 percent were fully inoculated.

An Ipsos-Sopra Steria poll released on Friday found more than 60 percent of French people agree with mandatory vaccination for health workers, as well as a requirement for a health pass in some public places.