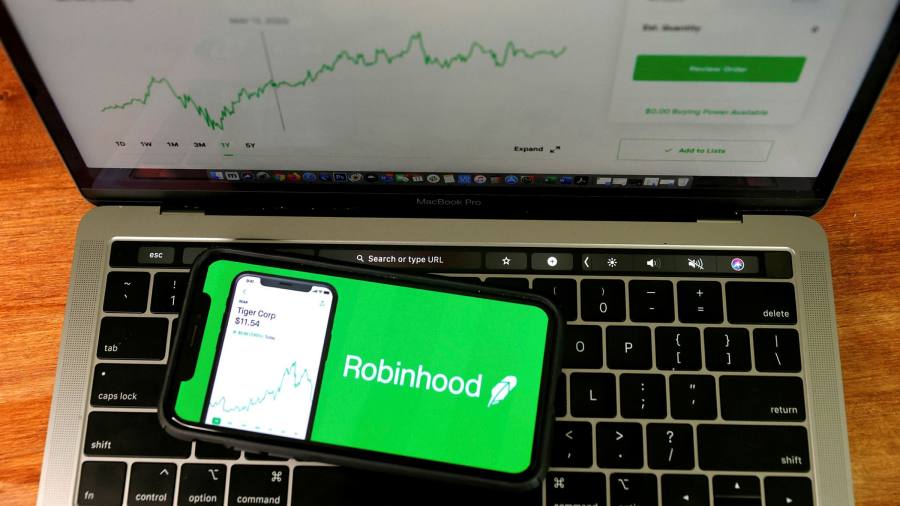 Online brokerage Robinhood is seeking a valuation of up to $35bn in its initial public offering, one of the most hotly anticipated stock listings of the year.

Robinhood is offering about 55m shares of its class A common stock at between $38 and $42 as it seeks to raise more than $2.3bn, the company said in a filing with the US Securities and Exchange Commission on Monday. The founders and chief financial officer are offering about 2.6m of the shares.

Thirty-five per cent of the company’s IPO shares will be available to retail traders, the company said. Robinhood plans to list its stock on the Nasdaq under the symbol “HOOD”.

Robinhood had been targeting a valuation of at least $40bn in the IPO, the Financial Times previously reported.

Goldman Sachs, JPMorgan Chase and Citigroup are among the banks underwriting the deal.

The Bay Area-based broker became synonymous with the recent surge of retail investing by day traders. Its registered users have doubled since the start of 2021 to 31m.

Robinhood’s total revenue grew 245 per cent in 2020 from a year ago to $959m. It also reported net income of $7m, compared with a net loss of $107m in 2019, according to the SEC filing. The company estimated it had 22.5m funded accounts, which are tied to bank accounts, as of the end of June, up from 18m at the end of the first quarter.

Robinhood’s mission to “democratise finance for all”, with no commission fees and an easy-to-use interface, has drawn a new demographic of young investors into markets. The median age of users is 31, younger than those at rival US brokers such as Charles Schwab or TD Ameritrade. The company says more than half of its customers are first-time investors.

Robinhood, which offers both equity, derivative and cryptocurrency trading, has also come under scrutiny by lawmakers and regulators as its popularity has grown. It has been criticised for practices such as “payment for order flow”, from which Robinhood derives the bulk of its revenue, and gamifying investing into a “casino”-like experience.

In late June, the US Financial Industry Regulatory Authority levied a $70m penalty against Robinhood for causing what it described as “widespread and significant harm” to customers.

The IPO valuation is of particular importance to investors who bought convertible notes issued in February, when Robinhood had to raise emergency funds to meet its obligations to clearing houses during the height of the GameStop trading mania.

These notes will convert into equity at a discount of at least 30 per cent to the offer price. For the most senior debtholders, the conversion is capped at a valuation of roughly $30bn.