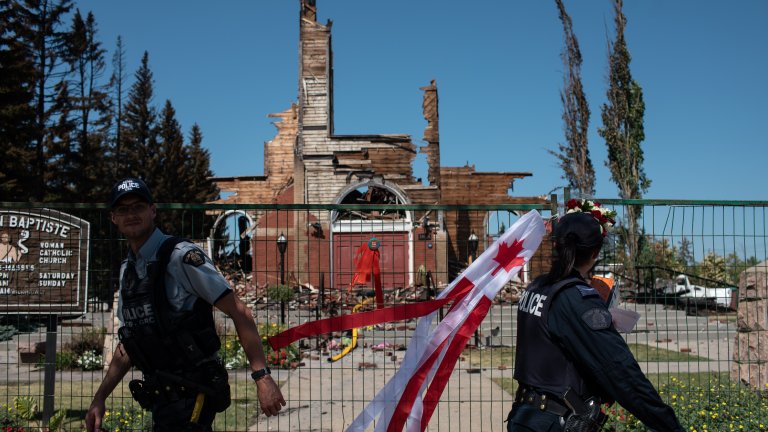 Father Sylvester Obi Ibeque is devastated. When he arrived at the Church of the Sacred Heart on the morning of June 21, where he had been preaching for years, only smoke, ashes, and other smoldering ruins remained. He feels powerless and far from alone.

No, this is not a story about Norway in the 90’s and the wave of church arsons by representatives of the rising black metal scene of teenagers and slightly older young people describing themselves as Satanists. This is the 21st century and the country is Canada.

At a time when the country is experiencing its greatest heat in years and dozens are dying from sunstroke, one might assume that the country’s temples have fallen victim to an accident, a combination of someone’s negligence, a candle or a chandeliers that they overturned and in this infinitely hot weather led to a fire.

But no, these are very targeted arsons. And Catholic churches began to burn as a sharp social response to the country’s dark past in the country and its involvement in attempts to culturally assimilate Native Americans.

At the end of May this year, the remains of 215 children were found on the territory of the former Indian girls’ school Kamlus in British Columbia.

Just a few days later, another 750 unnamed graves were found in another similar school run by the Catholic Church.

The revelations continue, and so far more than 1,500 unnamed children’s corpses have been found in various places in Canada.

All of these graves with the remains of children are a grim reminder of Canada’s late 19th and 20th century policies on indigenous peoples.

Between 1867 and 1996, about 150,000 children from various Indian tribes were taken by their parents and placed in boarding schools to be “re-educated.” Teachers there, often priests from local churches, are trying their best to kill the language and culture they have known so far, replacing it with Catholicism and British culture.

Of course, all this goes hand in hand with a monstrous amount of emotional, physical and sexual violence, as noted by the Truth and Reconciliation Commission of Canada, quoted by the BBC.

The new findings show that, among other things, murders were committed in these schools, on a mass scale.

At least 130 such schools were active until the mid-1990s throughout Canada, most of which are Catholic churches.

In general, the attitude of the Canadian state towards the indigenous population is not an example at all. In addition to these attempts at cultural assimilation, a number of social experiments have been conducted among the country’s indigenous population, and the level of drug addiction is many times higher than other groups in Canadian society.

And yes, social tensions over the treatment of Indians remain quite high. So when news appeared in the world media about a number of nameless graves of children from these schools for washing the personality, the anger hidden for years poured out again.

According to Bobby Cameron, leader of the Federation of Sovereign Local First Nations, this attack on local societies is a crime against humanity.

“We are proud people, the only crime we have ever committed as children is that we were born among the indigenous people,” Cameron said.

The spark of violence came on June 21, Canada’s National Indigenous Day, with the burning of Sacred Heart Churches in the Penticton and St. Gregory’s in the Osoyoos.

Five days later, a fire broke out in the Catholic church “St. Anne” in the land of the tribe Gorna Similkamin. In the land of the neighboring tribe Dolen Similkamin only a few hours later it is understood that the church “Chopaka” is burning. A small fire also damaged St. Paul’s Anglican Church on the land of the First Gitawanga Nation. The fire was extinguished before it could cause serious damage.

Fires have also destroyed churches in the northwestern territories and the eastern province of Nova Scotia. All fires broke out in areas under the control of local tribes, and incendiary liquids were found around the churches, which confirmed the deliberate nature of the fire.

The last such arson was on Wednesday, when St. Jean-Baptiste Catholic Church, north of Edmonton in Alberta, burned.

With that, the wave of condemnation of church burns by local leaders, politicians and police has begun. Alberta’s prime minister, Jason Kenny, even called the fires a “violent hate crime targeting the Catholic community.”

Prime Minister Justin Trudeau has apologized to the indigenous people. He condemned Canada’s past treatment of Indians, calling the schools in question “a shameful reminder of the systemic racism, discrimination and injustice that indigenous peoples have faced and continue to face in that country.”

However, he opposed the burning of churches.

“This is not the way to go. The destruction of places of worship is unacceptable and must stop,” he said.

His father, Pierre Trudeau, was Prime Minister of Canada between 1968 and 1979, when the policy of cultural assimilation was still in force. The prime minister is now proposing that the government allocate $ 27 million (about $ 22 million) to find other remains of Native American children from the time of the re-education program.

He also added that he had already spoken in person with Pope Francis to explain how important it was to apologize on behalf of the Catholic Church to local Canadian Indians.

Meanwhile, the church still refuses to apologize for these acts, although the pope has already confirmed that he will meet with people who were abused in these schools in December at the Vatican.

Some of the local Indians, however, decided to show solidarity with the local communities whose churches had burned down in the past month. Some of the tribes in Alberta visited the site of Morinville Church, although their relatives were sent to Juville School in St. Albert.

Local tribal leaders issued a statement describing the fires as an expression of the trauma of many generations of victims of these schools, which erupted in an aggressive manner. From there, they called for mutual support to help communities deal with these emotions in a healthier way.

“It is not our place to tell whom to worship and what historical significance it has for the members of our community, we are all free to choose and our place as a community is to support this freedom,” the message from the tribal leaders said. who joined the believers from the church in support.

However, not everyone accepts the whole situation so peacefully.

Penticton leader Greg Gabriel reminded that to this day many tribes do not have access to clean drinking water, while addiction to alcohol and drugs in the reserves reaches epidemic levels. That is why he called for real action, not just apologies for words.

“To see these graves and think about the horrible end of these children’s lives, it absolutely infuriates me. Apologies are too easy and I will certainly not accept an apology. I want action!” Gabriel was adamant.

First, a monument to Queen Victoria was torn down in front of the Manitoba state parliament building, whose capital is Winnipeg. The crowd greeted the statue’s fall to the ground, and then people began dancing around it and kicking it. Some demonstrators painted their palms red and then wiped them on the monument and its pedestal so that there would be bloody prints.

A nearby statue of Queen Elizabeth II was also removed from its pedestal.

Elizabeth II is now Canada’s head of state, and Queen Victoria was on the throne from 1837 to 1901, when Canada was part of the British Empire.

The British government has come up with a position condemning any action that desecrates a monument to the Queen.