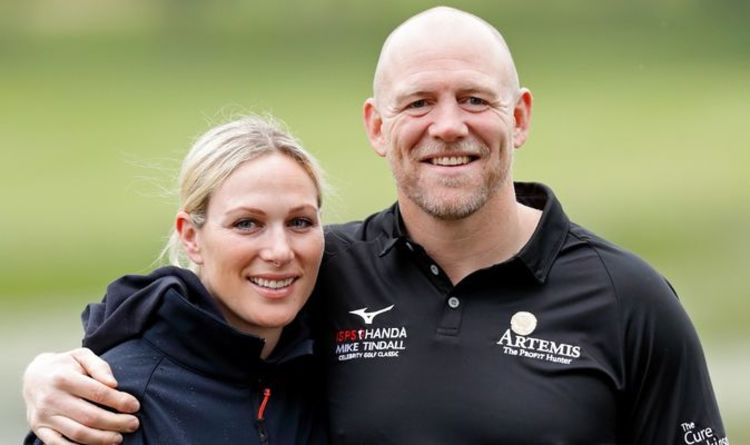 The image, shared to Twitter on Mr Tindall’s celebrity classics page, shows the ex-England centre sporting some rather questionable pink-patterned Bermuda shorts while in full golfing attire, including a glove and a hat. In contrast, Princess Anne’s Olympic silver medalist daughter was rocking a much more casual look, with white trainers, blue jeans and a dark-blue jacket.

The image shows Mr Tindall, who tied the knot with Zara in 2011, land a kiss on his wife’s head.

Zara, who has now had three children with the 75-time capped international, is also seen beaming with delight when the photo was snapped.

This year’s golfing tournament was held at the Belfry Hotel & Resort in Sutton Coldfield and was organised to raise money for two charities.

The first is the Matt Hampson Foundation.

JUST IN: ‘Take a break’ Harry and Meghan’s Archewell website has strange pop-up warning for readers

Matt Hampson, 36, was left paralysed from the neck down after he was involved in an accident at training with the England under 21 squad in 2005.

He established the charity in 2011 to help others who have suffered catastrophic injuries through sport.

The second charity, the Cure Parkinson’s Trust, is very close to Mr Tindall’s heart as his father was diagnosed with the disease in 2003.

Mike Tindall, who played in Sir Clive Woodward’s World Cup winning England side in 2003, recently explained that it has been a “tough five years” for the family.

The ex-Gloucester player, who lives just 14 miles away from the Cherry & Whites home ground Kingsholm, went on to offer his thanks to all the support he has received.

“Thanks so much for everyone who supported the day.