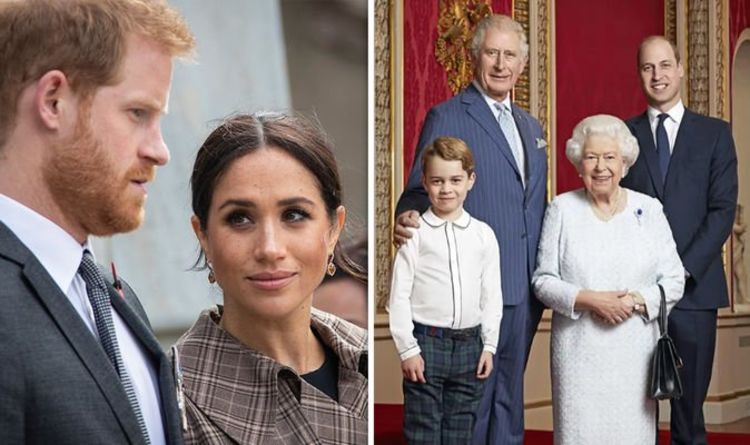 New chapters of the book ‘Meghan: A Hollywood Princess’ by Andrew Morton are set to be released on October 14. There are several fresh claims about what really went on behind Palace walls, including the Duke and Duchess of Sussex’ reaction to a photograph the Queen released at the start of 2020. Her Majesty shared a lovely photo of her, Charles, William and George in Buckingham Palace’s Throne Room, laying out the future of the British monarchy in an adorable family photo.

However, Mr Morton claimed in the chapters that it did not go down too well with Meghan and Harry.

The couple allegedly saw the picture as “unspoken code” about their royal future and made them question their place in the Firm.

He wrote: “The royal couple suspected that the entire institution was conspiring against them.

“As they saw it, the evidence was all around them.

“The unspoken code was straightforward: the future of the monarchy was assured, with or without Meghan and Harry.”

He also claimed this fear was confirmed for the pair when the Queen reportedly postponed a meeting with Harry, in which he had wanted to discuss his royal future.

He wrote: “This sense that, despite their international popularity, they were low down the royal totem pole was confirmed when Harry arranged to meet the Queen for a grandson-to-grandmother chat in early January.

“At the last minute the meeting was postponed.

Harry told James Cordon on The Late Late Show: “It was never walking away.

“It was stepping back rather than stepping down.

“It was a really difficult environment, as I think a lot of people saw.”

He added that he found the situation “toxic” and that he did “what any husband and father would do”.

Soon after, in an interview with Oprah Winfrey, Meghan revealed that she had suffered with suicidal thoughts while she was pregnant with Archie.

The couple claimed the institution did not sufficiently support Meghan with her mental health struggles.

They also claimed that a member of the Royal Family made racist comments about their unborn child, but did not reveal who made the comments.

However, they did later clarify that it was not the Queen or Prince Philip.

Meghan and Harry have always made it clear that they love and highly respect the Queen.

The Duke said he did not blindsight his grandmother because he respects her “too much”, while the Duchess said Her Majesty was always “wonderful” to her.