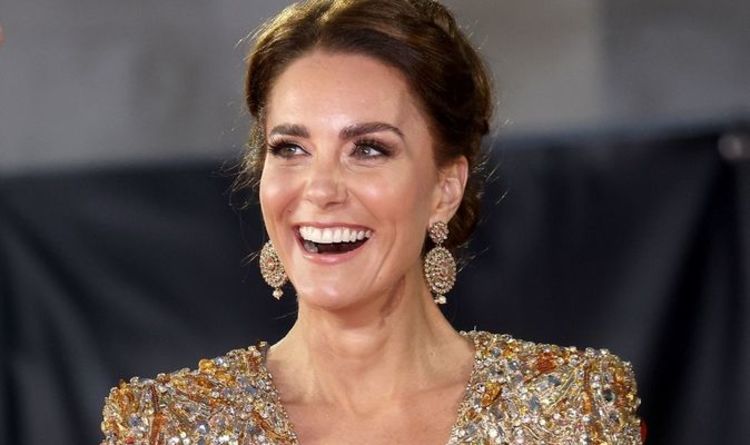 Royal fans looking to snatch the Duchess’ golden look can now buy the iconic gown as a part of designer Jenny Packham’s new 007 capsule collection. The golden sequined gown with a plunging neckline and dramatic cape was inspired by the Bond girl in the 1964 film Goldfinger – Jill Masterson.

The Jenny Packham dress is currently on sale for $ 5,488 at Neiman Marcus.

However, Kate’s stunning dress is not the only 007-inspired gown up for grabs.

The British designer created seven other looks inspired by the iconic spy franchise including Ms Packham’s original designs which make an appearance in “Die Another Day” and “Casino Royale”.

Announcing her glamorous spy sidekick collection, Ms Packham spoke about the inspiration she drew from the films.

The film was delayed over a year due to the Covid pandemic and was finally released to UK cinemas last Thursday.

Kate and Prince William graced the red carpet alongside the Prince of Wales and the Duchess of Cornwall.

While Kate opted for a dress inspired by Jill Masterson, William wore a suit worthy of Mr Bond himself.

No Time To Die will be the last movie featuring Daniel Craig as 007.

The film star met the Duchess of Cambridge and was just as impressed with Kate’s outfit as many fans, telling her: “You look jolly lovely.”