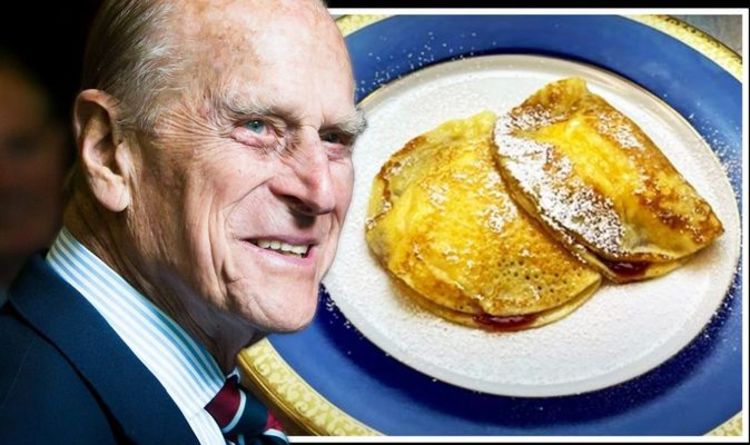 The Queen’s husband passed away at Windsor Castle in April aged 99, two months before his 100th birthday. Britain’s longest serving royal consort was well known as an adventurer and keen sportsman. He was stationed around the world with the Royal Navy and later launched his eponymous Duke of Edinburgh’s Award scheme. However, Philip was also known to enjoy less strenuous pastimes such as gardening and cooking.

His grandson, Prince Harry, paid tribute to Philip in April, saying he was the “master of the barbecue”.

Someone else who fondly remembered the late Duke’s culinary passions was chef Darren McGrady.

The 59-year-old was personal chef to the Queen, Princess Diana, the Prince of Wales, and princes’ William and Harry for 15 years.

Speaking in an unearthed video recorded the week after Philip died, Mr McGrady revealed that the late royal had a sweet tooth.

JUST IN: Royals fight back! Charles to lead dramatic Firm transformation after Megxit

In the video, which has now been viewed more than 500,000 times, the chef described Philip’s favourite pudding.

The simple dish, known as crepes Islandaise, is composed of very thin pancakes filled with jam and cream.

Philip first encountered the variety of crepes at a banquet in Iceland and enjoyed the pudding so much he asked for the recipe.

McGrady said: “He attended a banquet in Iceland and he loved this dish so much he asked for the recipe and then when he got it he sent it down to the kitchens.

“He was so excited that he’d got this recipe for the royal chefs to prepare.

McGrady said: “He had these plums that grew at Balmoral that just were amazing.

“Often you’d see him in the garden just stood there picking these gorgeous Victoria plums.”

He added: “The Victoria plums in the Balmoral gardens make the best plums – I know it was one of the Duke’s favourites.”

The chef also revealed that the first time he met Philip he mistook the royal for a gardener, having just recently joined the kitchen team at Balmoral.

He said: “This old man came in in tatty clothing, a real tatty sweater with all the elbows falling apart, and I thought he was the gardener.”

Mr McGrady said the man had requested to see the head chef.

He added: “So, I went off into the larder, found the chef. I said ‘Chef, the gardener is looking for you’. He said, ‘the gardener, at this time of night?’

“Well, we walked back into the kitchen together and the head chef said ‘Good evening your Royal Highness’ and I suddenly realised it was Prince Philip, Duke of Edinburgh.”