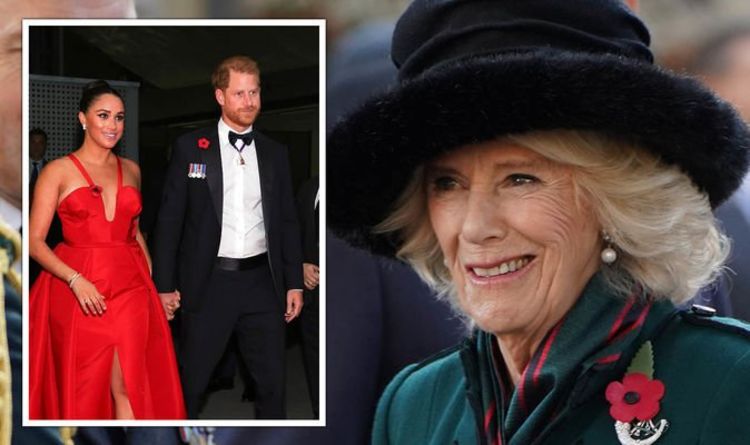 Camilla headed to Westminster Abbey on Thursday for a poignant engagement marking Armistice Day. The Duchess of Cornwall wore a green coat with a red poppy brooch and a large Rifles badge, honouring her role as Colonel-in-Chief of the Rifles regiment.

On the grounds of the abbey in central London, the future Queen Consort listened to the Dean of Westminster offering prayers to the fallen.

She then laid a wooden cross of Remembrance bearing a red poppy, before stepping back and paying a silent tribute to the fallen by bowing her head.

Camilla later joined the rest of the country in a national two-minute silence.

After this poignant moment, Camilla reviewed some of the memorial plots dedicated to regiments and other associations.

The Duchess of Cornwall attended the 93rd year of the Field of Remembrance as the patron of the Poppy Factory, which makes 120,000 royal and regimental wreaths a year.

This is the second year in a row Camilla carries out this sacred duty, which doesn’t only mark Armistice Day but also sets off the royal commemorations and tributes for those who died in battle.

The duty of laying the cross at the Field of Remembrance has been often carried out in the past by late Prince Philip and Prince Harry.

In 2019, the Duke was accompanied by his wife Meghan as they laid a cross and spoke to veterans.

READ MORE: Kate Middleton will be weighed by the Queen before Christmas

They were meant to be joined by Camilla, but the Duchess had to pull out from the event due to a chest infection.

The Field of Remembrance will be accessible to the public fromtoday until November 21.

It was first created in 1928, a decade after the end of the first world conflict, to honour the soldiers who had lost their lives.

Camilla’s public appearance will bring back the spotlight on royals in the UK after Meghan and Harry attended the Salute to Freedom gala in New York on Wednesday evening.

Prince Harry donned his four medals on his chest next to a red poppy.

He also wore on his neck the cross for Knight Commander of Royal Victorian Order.

The Duke was one of the guests of honour at the event, as he presented the inaugural Valor Awards to five recipients.

At the event, he delivered an address focused on the importance of embracing veterans in a community, the strength demonstrated by those who have suffered injuries while serving, his own service in the Army and the initiatives he has promoted to support servicemembers.

Recalling his service in Afghanistan, Harry said: “I served 10 years in the military, including two tours of duty in Afghanistan – one as an FAC on the ground and in the dust with some of you, another as an Apache helicoptr pilot in the air supporting and talking with you.

“Nothing was more valuable than the time I got to spend with my soldiers in a shell scrape, eating an MRE in the back of a tank (thanks for the swaps) flying a mission overhead knowing those below were safer, or making each other laugh when it was needed the most.

“My experience in the military made me who I am today, and I will always be grateful for the people I got to serve with — wherever in the world we were.

“But in war, you also see and experience things you hope no one else has to.

“These stay with us, sometimes like a slideshow of images.”