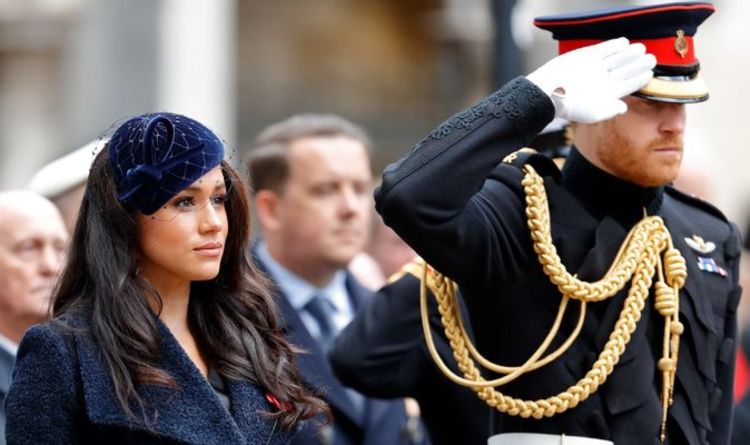 The Duke and Duchess of Sussex are marking Remembrance Sunday in the US for the second year after quitting royal duties and moving across the pond, as members of the Royal Family are set to attend the service at the Cenotaph. But Harry and Meghan risk upstaging the Queen after being accused last year of making Remembrance “about themselves”.

The Sussexes released pictures of themselves visiting Los Angeles National Cemetery on Remembrance Sunday in 2020.

Discussing the visit on the Pod Save the Queen podcast, the Mirror’s royal editor Russell Myers said the couple sparked criticism for making the occasion “about themselves”.

Mr Myers said: “Perhaps they shouldn’t have been in the photos.

“If you’d just had their backs and another picture of the wreath they’d laid, I think that would have been appropriate.

“It’s just, I think, the criticism labelled at them, saying that once again had been made about themselves is a case to answer, unfortunately.

“Because I was just shocked at the number of photographs that were then put out to the world’s media.”

Former soldier Harry was reportedly left saddened last year when his request for a wreath to be laid on his behalf at the Cenotaph was denied.

Harry and Meghan visited Joint Base McGuire-Dix-Lakehurst where they met with service members and their partners.

The Duke and Duchess hosted a luncheon with service members from all six branches of the military.

A spokesman for Archewell said: “Throughout their visit, they discuss mental health, the value of community and living a life of service.”

It is not known if the Sussexes have any plans to publicly mark Remembrance Sunday.

The Queen, who spent a night in hospital last month, will lead members of the Royal Family in honouring Britain’s war dead at the wreath-laying service in Whitehall.

Prince Charles, Camilla, Prince William and Kate will be among other senior royals at the Cenotaph.

The monarch, who lived through the Second World War as a teenager, is head of the Armed Forces and attaches great importance to the poignant service and to commemorating the sacrifices made by fallen servicemen and women.