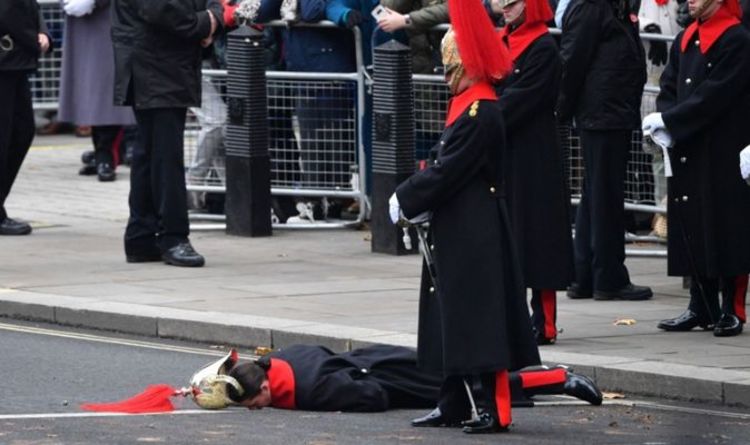 Dramatic pictures show one of the Queen’s Household Cavalry on the ground near the Cenotaph after appearing to faint. In the unfortunate incident, a female member of the army regiment is seen lying on her front in the road with her face against the tarmac.

She is wearing a long black coat with red trim and her shiny silver helmet has rolled off her head.

Gathered crowds watched on helplessly from behind the barriers on the pavement – with one stunned onlooker with their hands over their mouth.

Other members of the regiment carry on with the ceremony, while a fellow guard steps forward and glances down to check on their colleague.

At this stage, it is not known what caused the fall.

The Household Cavalry is formed of two regiments – The Life Guards and The Blues and Royals.

The Queen sparked panic across the nation by not attending the service.

The 95-year-old pulled out at the last-minute following a back injury.

Buckingham Palace said the monarch made the decision on Sunday morning “with great regret” and is “disappointed” to miss the event.

Duchess of Cornwall, Duchess of Cambridge and Countess of Wessex looked on from a balcony of the Foreign, Commonwealth and Development Office building.

Service personnel attending the ceremony wished the Queen well in her recovery.

Lance Corporal May Percival said: “My heart goes out to her and her family. I wish her well and the best.”

RAF Nurse Officer Stephen Andor said: “I wish her well. The Queen has very strong links to the military. She is the head of the armed forces.

“I think that every single member of the military wishes her well.”

The Queen has only missed six other Cenotaph ceremonies during her historic 69-year reign.

She was not present during the 1959 and 1963 services as she was pregnant with her two youngest children.