Bones Hyland scored 19 and Will Barton added 14 for the Nuggets, who had dropped six straight. Jokic, the reigning NBA MVP, hadn’t played in the last four of those because of a wrist injury but finished with 15 rebounds and seven assists.

Jeff Green scored 12 for Denver, which shot 58 per cent on the day it was revealed Michael Porter Jr. will need back surgery. Porter has been limited to nine games this season.

Good to see him back!🃏

It won’t appear on the box score, but check out this inch-perfect outlet pass to initiate the fast break from Nikola Jokic.

Bam Adebayo finished with 24 points and 13 rebounds for Miami, which was without its two leading scorers – Jimmy Butler was out with a bruised tailbone, and Tyler Herro missed the game with what the Heat called general body soreness.

Kyle Lowry had 17 points and 14 assists.

Lonzo Ball and the Chicago Bulls won the battle of the Ball brothers, riding a stellar performance by Nikola Vucevic to a victory over LaMelo Ball and the Charlotte Hornets. Chicago shot a season-high 59.6 per cent from the field and had five players score in double figures. Vucevic had a season-best 30 points and grabbed 14 rebounds. DeMar DeRozan scored 28 points, and Zach LaVine, a game-time decision because of an illness, finished with 25.

With patriarch LaVar Ball watching and wearing a black hat that read “I Told You So,” Lonzo Ball improved to 2-1 in three NBA meetings with the youngest of his two brothers. He had 16 points and eight assists, and LaMelo Ball had 18 points and 13 assists.

Terry Rozier scored 31 points for the Hornets. Charlotte trimmed a 23-point deficit to four with 7:31 left, but Chicago responded with a 9-0 run.

Jonas Valanciunas scored 29 of his career-high 39 points in a spectacular first half, and New Orleans beat Los Angeles for the second time this month. New Orleans rolled to a 21-point lead in the first half with a phenomenal effort from Valanciunas, the Lithuanian veteran in his first season with the Pelicans. The 6-foot-11 Valanciunas hit seven 3-pointers without a miss in the first half to the increasing delight of his teammates and even the 10-year veteran himself.

Valanciunas, who surpassed his career high for threes in the first half alone, had dropped 26 points and 13 rebounds on Los Angeles 10 days earlier in the Pelicans’ 94-81 win in New Orleans. He added 15 rebounds to his prolific scoring in the rematch.

The only players this season with 35 points, 10 rebounds and 7 threes in a game:

Valanciunas also becomes only the fourth player in #NBA HISTORY with 35+ points, 15+ rebounds and 7+ threes in a game.pic.twitter.com/sxFKTCT5B4

Paul George scored 27 points for the Clippers, who have lost three of four and six of nine after a seven-game winning streak.

Brandon Ingram scored 27 points in his former home arena for the Pelicans, who finished a 2-1 road trip. They have won three of four, doubling their season win total in the past six days after a 3-16 start without injured star Zion Williamson.

Christian Wood had 24 points and a career-high 21 rebounds as Houston won its third straight game by defeating Oklahoma City. 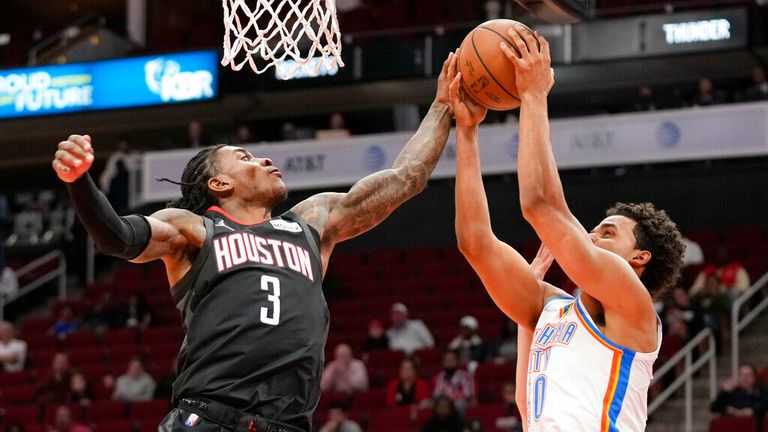 Houston’s winning streak follows a 15-game skid, while the loss was the sixth straight for Oklahoma City.

Wood’s performance came after he scored a career-best 33 points to lead Houston past Charlotte on Saturday night.

Karl-Anthony Towns scored 16 of his 32 points in the third quarter and Anthony Edwards added 21 as Minnesota rallied past Indiana. The Timberwolves trailed by 12 early in the third before Towns led a comeback that sent them to their seventh win in eight games. Michael Beasley hit a tiebreaking 3-pointer for Minnesota with 51.5 seconds left in the fourth.

D’Angelo Russell had 21 points and a season-high 11 assists for the Timberwolves.

Domantas Sabonis had 16 points, a career-high 25 rebounds and 10 assists for Indiana. Malcolm Brogdon added 25 points but the Pacers lost for the third time in four games. Allen also grabbed 14 rebounds and Darius Garland added 18 points for the Cavaliers in their most lopsided win of the season. Their largest lead was 31 midway through the fourth quarter, when Markkanen’s fifth 3-pointer put Cleveland ahead 104-73.

Luka Doncic posted his second triple-double of the season with 25 points, 10 rebounds and 10 assists for the Mavericks. Doncic made a season-high seven 3-pointers (7 of 11), while his teammates went 4 for 28 from behind the arc.

Dallas (10-9) has lost five of six. Kristaps Porzingis left midway through the second half with a right ankle sprain. Murray also dished out eight assists for the Spurs, who had six players score in double figures. They last won back-to-back games (three straight) in a stretch in late April.

Bradley Beal scored 18 for the Wizards, who completed a 2-2 road trip.

Jazz completely in tune in win over Blazers

Donovan Mitchell scored 30 points and Rudy Gobert had 21 points and 16 rebounds in Utah’s victory over Portland. Jordan Clarkson added 22 points for Utah, which hit 19 3-pointers and shot 53 per cent from the field a game after making a season-high 20 threes. The Jazz matched their season best with 46 field goals.

Anfernee Simons scored a season-high 24 points and Jusuf Nurkic also had 24 as the Trail Blazers fell to 1-10 on the road. The Sixers just hung on from the line. Ty Maxey made two for the lead, Joel Embiid hit 3 of 4 and Maxey added two more to help the Sixers avoid an embarrassing defeat. Embiid scored 16 points on 4-for-16 shooting.

Franz Wagner led the Magic with 27 points. Fellow rookie Jalen Suggs left the game with an injury, diagnosed later as a fractured thumb and will be out for an extended period of time.