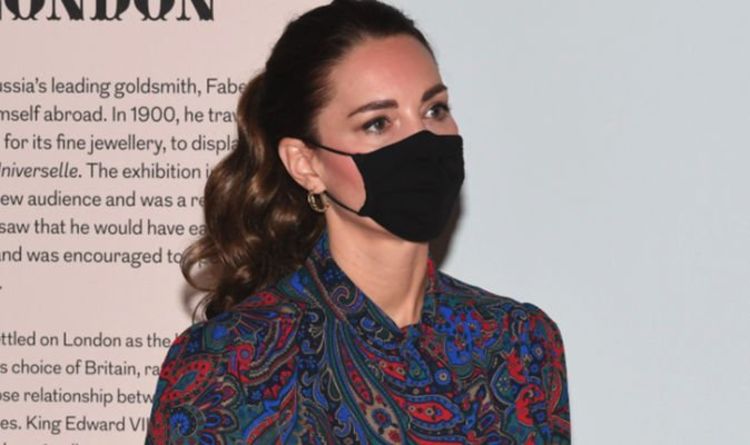 Kate visited the V&A museum in London on Thursday morning. As patron of the museum, the Duchess was shown around a new exhibition focused on uniquee Fabergé pieces, called ‘Fabergé in London: Romance to Revolution’.

Kate donned a colourful blouse and black wide-legged trousers, which matched with her face covering worn in accordance with the new Government’s advice on coronavirus introduced earlier this week amid the emergence of the new Omicron variant.

During the visit, the Duchess looked in awe at the beautiful collection, which included some pieces loaned by Queen Elizabeth II.

Admiring the Peacock Egg, which features an enamelled gold peacock perched on a flowering branch, Kate could be heard to say: “I love the tree”.

The royal was accompanied on her tour by V&A director Tristram Hunt and shown around by curator Kieran McCarthy.

While learning more about the exhibition, Kate congratulated on those who worked on the display.

Speaking after the visit, Mr McCarthy said Kate had been “fascinated by the whole subject”.

The curator revealed Kate shown a candid curiosity and interest for the exhibition as well as a clear eye for detail.

He said: “That came through over and over again, just ‘How did they do that? Why does that look like that?’

“There was a lot of why and wherefore in the discussion, which was very interesting because it takes a sophistication to look beyond seeing the spectacle to actually probe into the details, and that was there.”

The exhibition features the largest collection of Fabergé’s Imperial Easter Eggs in a generation and showcases more than 200 objects.

It also provides an insight into Fabergé’s works, his internationally recognised company and the Anglo-Russian nature of his enterprise.