Watch the incredible end to the Abu Dhabi GP and the 2021 title fight as Max Verstappen passes Lewis Hamilton on the final lap for the F1 world championship.

Watch the incredible end to the Abu Dhabi GP and the 2021 title fight as Max Verstappen passes Lewis Hamilton on the final lap for the F1 world championship.

Max Verstappen has become Formula 1 world champion for the first time after an extraordinary, controversial finish to the season-ending Abu Dhabi GP which saw him overtake Lewis Hamilton on the final lap after a dramatic late Safety Car.

Mercedes have protested the result, however, with stewards currently hearing their case after the team were left livid by the way Race Control handled the end of the Safety Car procedure before the race resumed.

Hamilton appeared to be heading for his record eighth crown after overtaking the polesitting Verstappen at the start but a crash for Nicholas Latifi in the Williams brought out the Safety Car with five laps to go and created all manner of drama to end an absolutely incredible season.

Red Bull pitted Verstappen for new soft tyres, while Hamilton stayed out in the lead to keep track position on his older set.

While there were initially five lapped cars between the contenders in the queue behind the Safety Car, Race Control instructed that pack to join the back of the queue on the penultimate tour and that recreated the Hamilton-Verstappen one-two for a blockbuster final-lap restart.

Amid protestations from an angry Mercedes pit wall to FIA race director Michael Masi, the race resumed on the 58th and final lap of the race – and gripping season – and Verstappen overtook Hamilton down the inside at Turn Five to take the win and the crown away from his Mercedes rival.

Verstappen becomes the first Dutchman to win the title and the second champion for Red Bull after Sebastian Vettel, the last non-Mercedes driver to take the championship in 2013.

“It’s unbelievable,” said a disbelieving Verstappen, who at 24 is the sport’s fourth-youngest world champion. “Throughout the whole race I kept fighting and to have an opportunity on the last lap, it’s incredible. I’m having cramp. It’s insane.”

Despite the huge disappointment of the stunning late turnaround just as he appeared on the cusp of yet more history, Hamilton sportingly went straight to congratulate Verstappen in parc ferme.

“Firstly congratulations to Max and to his team. I think we did an amazing job this year,” said F1’s outgoing champion. “My team, everyone back at the factory, have worked so hard this whole year, it’s been the most difficult of seasons. I’m so proud of them and I’m so grateful to be a part of the journey with them. 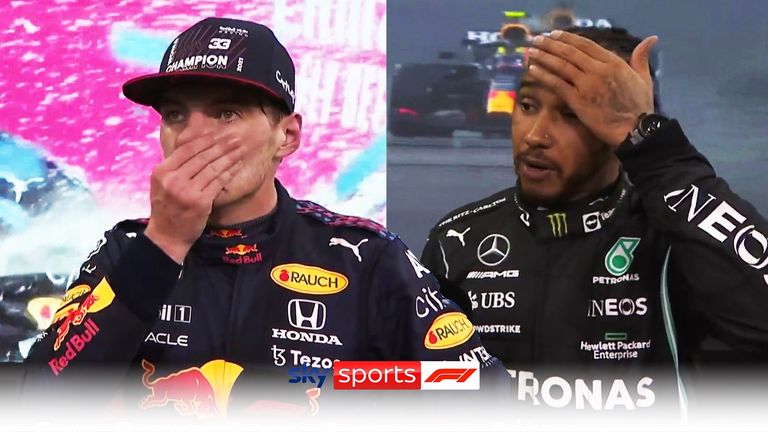 “This last part of the season we gave it absolutely everything and never gave up.”

Hamilton had hoped to become the sport’s eight-time world champion but remains tied with Michael Schumacher on seven for now.

Mercedes still clinched a record-extending eighth consecutive Constructors’ Championship from Red Bull, but that impressive achievement is likely to offer little solace in the immediate aftermath of Sunday’s remarkable and contentious finish.