Chelsea produced a stunning first-half fightback to salvage a 2-2 draw against Liverpool as Manchester City’s rivals served up a Premier League classic which did little for either sides’ title aspirations.

Liverpool looked on course to emerge as the primary challengers to City’s crown as goals from Sadio Mane, who escaped a first-minute red card for an elbow on Cesar Azpilicueta, and Mohamed Salah saw the visitors race into a two-goal lead and silence Stamford Bridge inside the opening 26 minutes.

But Chelsea, who dropped club-record signing Romelu Lukaku, produced a spirited comeback in the space of four first-half minutes as Mateo Kovacic’s spectacular volley and Christian Pulisic’s brilliant lob levelled the pulsating contest on the stroke of half-time.

The platform was there for both Chelsea and Liverpool to push on and claim a victory which would have taken a chunk out of Manchester City’s 11-point lead at the top of the table, but inspired saves from Caoimhin Kelleher and Edouard Mendy ensured the spoils were shared.

The result means Chelsea remain second, 10 points behind leaders City, and a point and a place ahead of third-place Liverpool, who have played a game fewer than their title rivals.

Man of the match: Mateo Kovacic

Second hosted third at Stamford Bridge, with the title of chief challengers to Manchester City’s Premier League crown the prize for the victors.

Chelsea, keen to ensure the glaring omission of striker Lukaku would not derail their challenge, started like a side possessed, penning Liverpool in their defensive third from the outset.

Liverpool’s bid, meanwhile, could have been derailed inside 15 seconds had Mane been shown red and not yellow for catching Chelsea captain Azpilicueta in the face with a leading elbow.

Chelsea rallied but to no avail and were two down after 26 minutes. Kai Havertz’s inability to hold-up play resulted in him being dispossessed and Trent Alexander-Arnold floating a pass up to Salah, who skipped effortlessly around Marcos Alonso before producing an unerring finish at Mendy’s near post.

Chelsea were floored and on the brink of seeing the game slip away from them, with the hosts indebted to a goal-saving challenge from Chalobah, who atoned for his earlier mistake by preventing Salah from adding a third on the counter and putting Liverpool out of sight.

But, just as Chelsea looked out of ideas, a lifeline was provided thanks to a bolt from the blue from Kovacic, whose pinpoint volley from the edge of the box swerved away from stand-in Liverpool goalkeeper Kelleher before cannoning in off the post.

With Chelsea’s hopes ignited on the pitch, the hosts completed the most thrilling of comebacks before the half was up, with N’Golo Kante hooking a pass in behind the Liverpool defence which Pulisic latched onto before lobbing over Kelleher and sparking wild celebrations inside Stamford Bridge.

Having looked set to reach the interval in control, it was Liverpool who were begging for the referee’s whistle, with a rampant Chelsea denied a quickfire third when Mason Mount sent a volley trickling inches wide deep into first-half stoppage time.

Liverpool regrouped during the interval and fashioned three clear chances to restore their lead but found Mendy in inspired form. The Chelsea goalkeeper thwarted a fine Diogo Jota volley within seven minutes of the restart, and then reacted brilliantly to tip Salah’s attempted lob over after the Liverpool forward had spotted him off his line, before Mane was denied a second at the end of a flowing one-touch move involving Salah and James Milner.

Anything Mendy could do, Kelleher could do better, with the Liverpool stopper producing a stunning save at point-blank range to keep Pulisic’s hooked effort from finding the net just after the hour, and it proved to be the final clear-cut opening of a Premier League classic, which may have just sent the title back to Manchester. 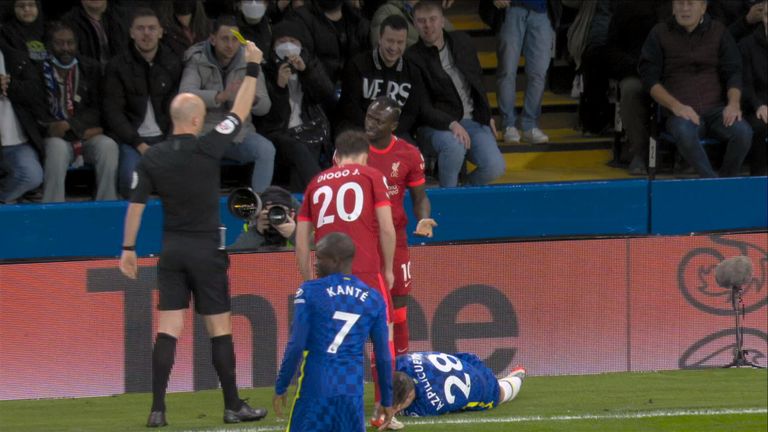 On Mane’s booking for an elbow inside the first minute: “It’s a clear red. I don’t mind if it’s five seconds into the game, it’s the first action and it’s a clear red. It doesn’t want to challenge, he doesn’t see the ball he just wants to lead with the elbow. I honestly don’t understand it.

“We’ve had these types of decisions recently. The other day, we had two penalties where VAR wasn’t used. It was a clear red card and we’re getting these decisions against us which could change the course of the games.”

Man of the Match – Mateo Kovacic

Chelsea host Tottenham on Wednesday at 7.45pm before Liverpool travel to Arsenal on Thursday at 7.45pm in the semi-finals of the Carabao Cup – both live on Sky Sports Football.