UT previously faced off with No. 1/1 Stanford on December 18th, playing competitively before falling, 78-51, at Maples Pavilion.

This will mark the 59th meeting in a series that began in 1972, with Tennessee leading 58-10. The Lady Vols will try to snap a two-game losing skid to the Gamecocks, but the Big Orange will try to extend a two-game winning streak in games played at Colonial Life Arena. 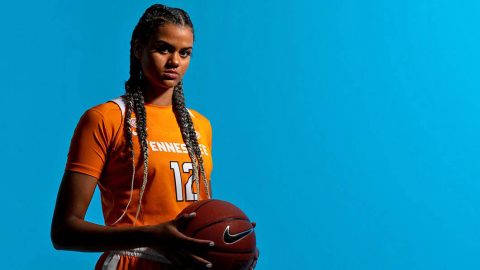 Tennessee Women’s Basketball is on the road Sunday to take on South Carolina. (UT Athletics)

Sunday’s match-up will offer a battle between the SEC’s first-place team, South Carolina, and the Lady Vols, who are tied with Mississippi State for second place with one loss apiece.

Sunday’s game will be televised by ESPN2 with Courtney Lyle (PxP) and Carolyn Peck (Analyst) handling the call.The contest also can be heard on Lady Vol Network radio stations and by audio stream, with Mickey Dearstone calling the action for the 21st season and Bobby Rader serving as the studio host.

A link to the live audio stream can be found on each game’s Hoops Central page or the Lady Vol schedule on UTSports.com.

Air time for games on the Lady Vol Radio Network generally occurs 30 minutes prior to tip-off.

SECN+ games are online broadcasts and are available only on WatchESPN via computers, smartphones and tablets.

All of the games included in the ESPN package (ESPN, ESPN2, ESPNU) and the SEC Network will be available through WatchESPN, accessible online at WatchESPN.com, on smartphones and tablets via the WatchESPN app, and streamed on televisions through Amazon Fire TV, Apple TV, Chromecast, Roku, Xbox 360 or Xbox One to fans who receive their video subscription from an affiliated provider.

Tennessee Lady Vols vs. No. 1 Teams

Coach Pat Summitt was 14-31 in those contests, while Holly Warlick was 0-2 during her tenure and Kellie Harper is 0-1, with her team falling to Stanford earlier this season, 78-51, on December 18th.

This marks the first time since 2011-12 that the Lady Vols have faced two No. 1 teams in a season. UT went 0-2 that year, losing to Baylor twice.

This is the 15th time the Lady Vol program has had multiple games vs. No. 1 teams in the same season.

Tennessee’s Tamari Key (4.5) and South Carolina’s Aliyah Boston (1.9) stand No. 1 and No. 4 in blocked shots in league contests.

The Road Leading Up To This

The Tennessee Lady Vols enter Sunday having won six of its last seven and nine of its last 11.

Rennia Davis is averaging 22.7 points per game over her last five, shooting 50.0 percent from the field, 38.5 on threes and 89.5 at the charity stripe.

Jazmine Massengill is averaging 10.7 ppg. and shooting 54.2 percent over the last five games.

South Carolina comes in riding a 14-game winning streak since losing to No. 17/23 Indiana at the Paradise Jam in the U.S.V.I. on November 28th.

The Gamecocks are coming off an 87-32 win at Ole Miss. on Thursday night. UT collected an equally impressive 84-28 victory at Ole Miss on January 9th.

Junior forward Rennia Davis poured in 22 points to lead No. 22/22 Tennessee to a 78-69 victory over in-state rival Vanderbilt at Memorial Gymnasium in Nashville on Thursday night.

Davis scored 16 of her points in the second half to hit double figures in points for the 19th straight game and for the 33rd time in her past 34 games. Jazmine Massengill was Tennessee’s (17-4, 7-1 SEC) second-highest scorer with 14 points, and Jordan Horston and Rae Burrell each turned in 11.

Notes From The Last Game

Burrell Back In Double Digits
Sophomore Rae Burrell came off the bench to turn in 11 points against the ‘Dores. It’s the ninth time this season she has scored 10 or more and the third time in SEC play.

Massengill Hitting Her Stride
Jazmine Massengill turned in her second double-digit performance in three games, setting a new SEC high of 14 points against Vandy while doling out three assists. She has now scored 10+ points on six occasions this season.

Shooting 50 Percent Or Better
The Tennessee Lady Vols hit 51.7 percent of their shots against Vandy, marking the ninth time this season and the fourth time in SEC play they have shot 50 percent or better. That occurred only three times during the entire 2018-19 season.

UT enters Sunday’s contest with a 50-8 advantage in the series, including 21-2 in Columbia, 22-3 in Knoxville and 7-3 at neutral sites. UT has won the last two times in Columbia.

Since 2012, the series has been very streaky. UT won three straight, then USC took three in a row. After the Lady Vols claimed three consecutive wins, South Carolina now is trying to make it three in a row in its favor.

Kellie Harper has a 1-3 record vs. South Carolina as a head coach. She was 0-1 while at Western Carolina, and 1-2 while at NC State, beating the Gamecocks, 55-53, in Raleigh on December 4th, 2011, the last time she and Dawn Staley met on the hardwood.

Harper was 5-0 vs. USC as a player, participating in the only overtime game between these schools in 1996.

After defeating South Carolina, the regular season SEC champs at 14-2, the 13-3 Lady Vols went on to claim the 2014 SEC Tournament title in Duluth, GA.

About the South Carolina Gamecocks

South Carolina returned two starters and six total letterwinners from last season’s 23-10 squad that was second in the SEC at 13-3.

USC was picked by the media to win the SEC this season. The coaches projected USC second.

The Gamecocks start three freshmen from the nation’s No. 1 class, with rookie Aliyah Boston leading the way in scoring (13.2) and rebounding (8.9).

Leticia Amihere scored 16 points and No. 1 South Carolina held Mississippi scoreless in the first quarter and limited Ole Miss to two points in the first half en route to an 87-32 win on Thursday night.

A combined 18 second-half points from the sophomore duo of Rennia Davis and Evina Westbrook was not enough for the Lady Vols to complete a frantic comeback against No. 13-ranked South Carolina, which notched an 82-67 win at Thompson-Boling Arena on February 24th, 2019.

Tennessee (17-10, 6-8 SEC) cut the Gamecocks’ lead down to seven points twice in the second half despite a 16-point deficit at the half.

The Gamecocks (20-7, 12-2 SEC) were propelled by a 28-point performance from redshirt senior guard Bianca Cuevas-Moore, who connected on three of seven shots from beyond the arc.

Last Time Tennessee Was In Columbia

Jaime Nared added 21 points as the Lady Vols (16-1, 4-1 SEC) bounced back from their first loss of the season with a win over the defending national champions and their second consecutive victory in Columbia. UT was fueled by a balanced attack, with five different players reaching double figures.

Tyasha Harris put on an offensive display for South Carolina (14-3, 3-2 SEC) with a game-high 28 points and four assists. The Gamecocks were able to cut the deficit to four with under six minutes remaining in the fourth quarter, but Tennessee relied on strong defense and timely scoring to end the game on a 16-4 run.

BySporting News The Philadelphia Eagles will take on Daniel Jones with what feels like half of their regular roster out with injury.The injury bug has...
Read more