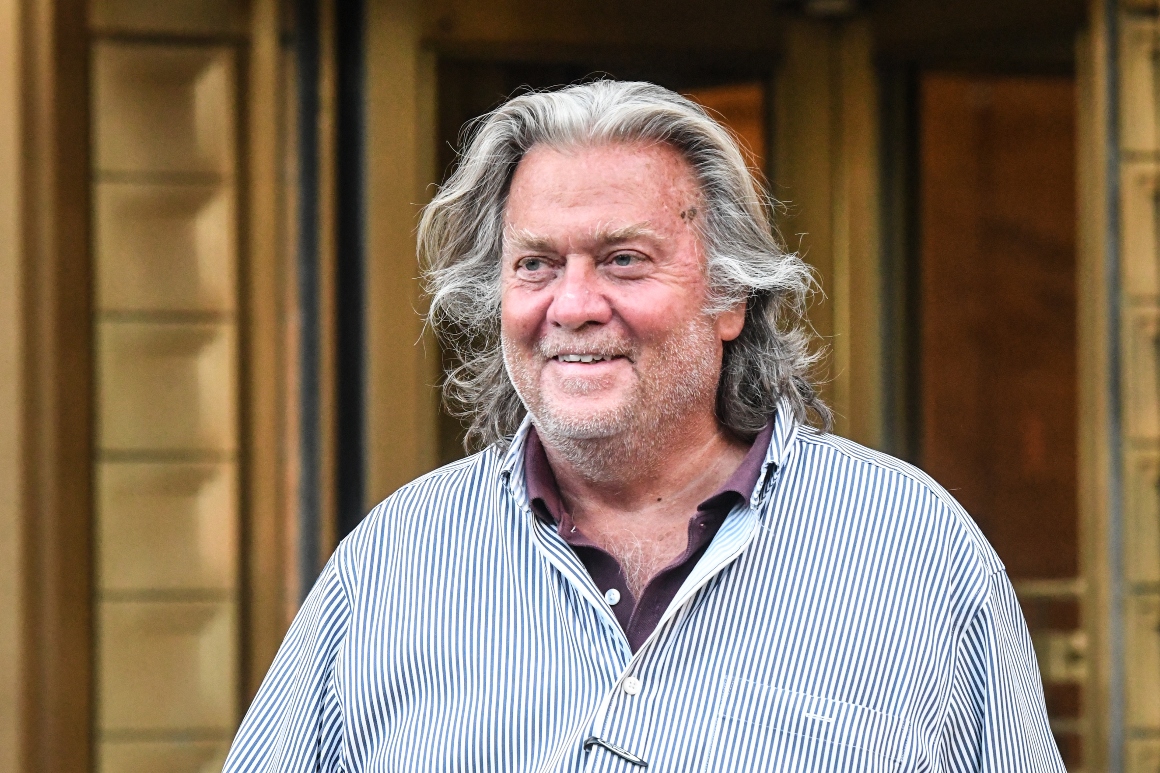 But the sums the organizers allegedly diverted from the wall-building group are chump change compared to many nonprofit organizations, particularly new ones. The charges suggest Bannon and others walked off with — at most — about 4 percent of the $ 25 million raised. Prosecutors say Kolfage got over $ 350,000 in salary payments, while Bannon faces a vaguer claim that he received a “substantial portion” of $ 1 million transferred to a nonprofit he controls.

“That’s an overhead of … 1/3 that of the best-run and most economical charity in the nation, the Salvation Army,” conservative attorney and book agent Lynn Chu wrote on Facebook. “Many direct mail/email fundraising firms charge way more. Even many charity benefit dinners lose money. It really does seem to have been a pretty lean operation.”

Indeed, overhead costs of more than 80 percent are not unheard of in the nonprofit sector, especially for organizations just starting out. Fundraising consultants, accountants, lawyers and others often siphon off half or more of a charity’s income.

One of the prosecutors pursuing the case against Bannon and his cohorts, Alison Moe, previously handled what was billed as the “first-ever” federal criminal prosecution over so-called scam PACs. Arizona political fundraiser William Tierney pleaded guilty and received a two-year sentence for running half a dozen groups that were outright scams. Less than 1 percent of the money raised went to candidate campaigns, prosecutors said.

Generally speaking, donors don’t like the idea of their money not going to the cause. According to a survey released in 2018, they think charities spend about 28 percent of their money on overhead and believe the figure should be closer to 19 percent. The mean spending on overhead is around 20 percent, according to a 2016 study, though the accuracy and utility of such calculations are hotly disputed.

Still, the figures for We Build the Wall don’t seem in any macro sense excessive or abusive, which is something the defendants could seek to bring out at a trial.

That’s part of why the feds have framed the case more narrowly as a wire fraud case, contending that the men enriched themselves through lies and deceit.

“In a way, it’s not really a nonprofit compliance case,” said Joe Birkenstock, an attorney at law firm Sandler Reiff, which represents Democratic and liberal groups. “You are allowed to pay yourself. It is not against the law to recover your costs and take reasonable compensation.”

Several lawyers noted that allegations of waste or self-dealing by a nonprofit’s leaders are typically handled through administrative proceedings or a civil lawsuit, not criminal prosecution.

“There’s no bright line test for this. Cases like this are not routinely brought as criminal. If there’s that kind of vague line, frequently the government will file a civil suit to seek reimbursement,” said longtime defense attorney Harvey Silverglate. “Fraud is really anything a federal prosecutor doesn’t like the smell of.”

Silverglate said he’s suspicious of the case because of Bannon’s tumultuous history with President Donald Trump. “There’s definitely some kind of a grudge going on here,” the defense lawyer speculated. “I’m not saying Bannon is a nice guy. I think he’s a pretty loathsome creature, but that doesn’t make him a criminal—it makes him a loathsome creature.”

Some lawyers expressed concern that there would be little to stop prosecutors from bringing a similar case against many well-intentioned charitable groups. “I think you could jam one of these prosecutions down against a very well-meaning organization,” said Andrea Moseley of D.C. law firm Kropf Moseley.

To make their case, it won’t be enough for prosecutors to show that Bannon or others involved fibbed here or there. Instead, the government must prove that the comments made and assurances offered by the fundraisers were “material,” meaning they induced people or could have induced people to part with funds they would not otherwise have given.

Prosecutors clearly believe the lengths to which the organizers allegedly went to cover up payments to Kolfage shows they understood that the claim he was working for free mattered. The indictment also specifically alleges that one co-defendant, Bannon associate Andrew Badolato, actually used the magic word “material” in an email, saying that the claim that Kolfage would “not take a penny” was a “material item” that needed to be conveyed to donors.

The charges seem to invite a trial to turn into a parade of donors for both sides, with some claiming they’re offended by the conduct, while others are not.

At the first hearing for Bannon Thursday, prosecutor Nicolas Roos said his office is reaching out to donors who are victims in the case. But other donors who spoke to Marketwatch in recent days said they’d gladly give again, despite the allegations.

Some of the group’s statements about their plans were obvious hyperbole or, at a minimum, absurdly ambitious. Kolfage talked publicly about raising $ 1 billion. That statement itself may have induced some donors to give.

When POLITICO revealed Bannon’s involvement with the project last year, he lowered the sights to a mere $ 100 million to $ 200 million. Would anyone reasonably think that an organization on that scale could be run without overhead or paid staff?

When it comes to investments and consumer transactions, courts have also ruled that defendants can’t be held liable for the literal truth of every statement made and that a salesperson’s typical exaggeration doesn’t give rise to criminal or civil liability. This defense — that the misstatements were “mere puffery” — was wielded by Trump University in civil fraud lawsuits until Trump decided to settle them just before taking office.

“All sellers engage in a certain amount of puffing; all buyers, even those who are rather gullible, know this,” the 7th Circuit Court of Appeals wrote in 1996. Whether and how those principles would apply in a case involving solicitation on behalf of a nonprofit or political cause is unclear.

It’s also unclear just how a battle between aggrieved and contented donors would play out in court. Prosecutors might well argue that if even one donor was or could have been unfairly persuaded to give, the defendants are guilty, while the defense could assert that a bevy of donors who say they never heard or never cared about the “volunteer” claims means they weren’t material.

Moseley says a swearing contest between donors isn’t the best way to resolve disputes about whether a charity’s leaders have spent unwisely, particularly when there is no bright-line rule about how much spending on overhead or personnel is too much.

“If someone wants to regulate that, I welcome that clarity, but it’s not being done. When there isn’t that sort of clarity, if you turn around and charge someone with a crime is that because you cherry pick?” she asked.

It was on the level when we brought in the cash

The key question regarding the fraud in this sort of case would normally be what the fundraisers’ intent was at the time they raised the money, not how they handled circumstances that developed later. If Bannon and others took in money with the best intentions, but later decided to part with promises made at the outset, that might be breach of contract or run afoul of charity rules. However, it isn’t typically prosecuted as criminal fraud.

Museums, for instance, often make promises they find difficult to keep about where donated art will be displayed or whether it will be displayed at all. That can lead to protracted litigation, but not criminal prosecution unless there was some trickery from the outset.

To address this potential defense, prosecutors have tried to move the starting line away from when the project kicked off on GoFundMe in December 2018. In fact, a close reading of the indictment shows that the claimed victim of the fraud is not donors, but GoFundMe itself.

And the charges don’t accuse Kolfage and others of having criminal intent early on, but of developing a scheme to try to get the crowdfunding site to part with the $ 20 million that had accumulated. GoFundMe apparently froze the funds, pending assurances that Kolfage was setting up some bona fide nonprofit to handle the money. The crowdfunding site later implemented an opt-in procedure that asked donors to approve transfer of the money to We Build The Wall.

Still, the murkiness around the alleged timing of the fraud — and just who was tricked — could create opportunities for the defense to argue that even if the men did craft a plan to funnel money to Kolfage, that happened well after the funds were solicited.

Prosecutors brought the case as a conspiracy, arguing that each of the four defendants is essentially responsible for conduct of the others because of their illegal agreement. But since the project wasn’t something that is automatically illegal, like a drug deal, some of the defendants could have opportunities to try to distance themselves from the most incriminating evidence in the case by saying they never had any intent to commit a crime.

Kolfage’s statements and promises appear to be at the center of the case. He’s the one who repeatedly proclaimed he wouldn’t take any money for his role in the wall effort.