8 Big Reasons Election Day 2020 Could Be a Disaster 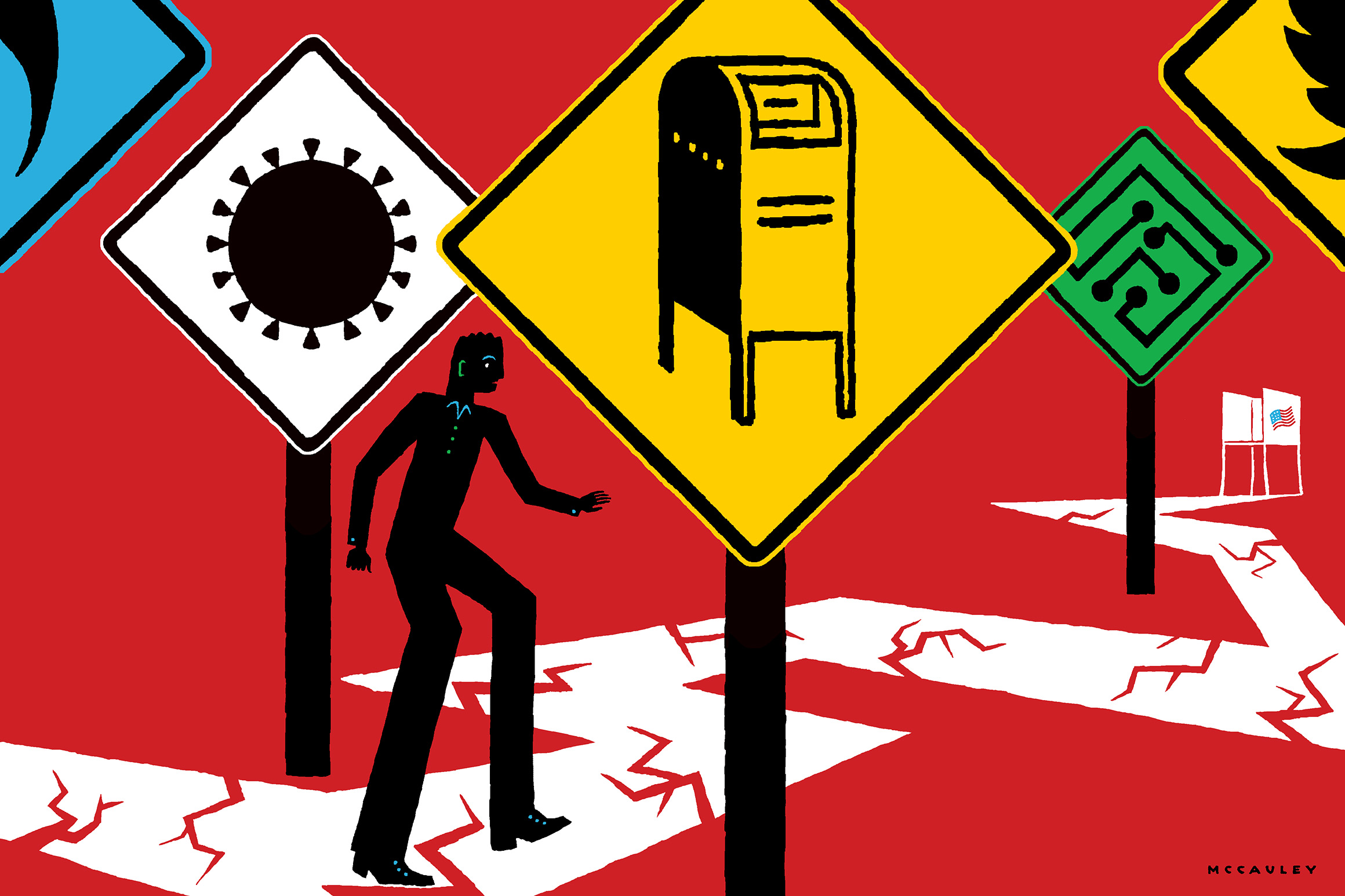 It seems like ancient history, but presidents for most of American history have genuinely let U.S. elections run their course, declining to use their power to tilt the scales in their own favor. Sure, incumbents enjoy the advantage of campaigning from Air Force One, and may try to goose the economy to curry votes, but they’ve mostly abided by America’s strong democratic norms and traditions of not weaponizing the office’s powers against your opponent.

Trump is different. At its heart, the Ukraine scandal last fall was about the president using America’s international leverage for his personal campaign, pressing another leader for dirt—or, more accurately, to create the appearance of dirt—on his most likely rival, Joe Biden. More recently, Trump’s attorney general, William Barr, has been implying that his investigation of the Mueller investigation will upend things in a way that would benefit his boss.

In recent months, the president has been tweeting wildly to undermine the very legitimacy of the vote-by-mail procedures being instituted across the country. The president’s campaign against mail-in ballots has been fierce, regular and vociferous; in one tweet, he even suggested, without evidence, that foreign countries would print “millions” of mail-in ballots, a conceit that would be laughable except that he’s the president, with millions of loyal supporters, and it profoundly undermines Americans’ confidence in their own electoral process.

The truth, of course, is that rampant voter fraud just doesn’t exist in the United States—and mail-in voting has a particularly infinitesimal percentage of fraud. Washington state secretary of state Wyman says that in 2018 they found 142 fraudulent voting attempts out of 3.2 million ballots—that is .004 percent fraud.

Democrats and Republicans alike are openly wondering now: What happens if Donald Trump refuses to concede?

Trump’s rhetoric has even GOP officials worried, since his tweets might discourage his own supporters from voting by mail—skewing races while simultaneously making MAGA-ites less likely to trust a loss. Both Pennsylvania, where 70 percent of the absentee ballot requests came from Democrats, and Indiana, where 55 percent of its mail-in ballot requests came from Democrats, give GOP leaders pause.

Despite the concerns, Trump’s campaign to undermine confidence in the election shows no sign of slowing: Earlier this month, he tweeted, “Mail-In Ballot fraud found in many elections. People are just now seeing how bad, dishonest and slow it is. Election results could be delayed for months. No more big election night answers? 1% not even counted in 2016. Ridiculous! Just a formula for RIGGING an Election….”

Such comments are worrisome not just because of their short-term impact on the voting procedures, but because they appear to lay the groundwork for a challenge to the results themselves, particularly if a close loss or general confusion around the election gives him even a remotely plausible—however far-fetched—excuse to fight. In the same interview with POLITICO last month in which he cast doubt on the mail-in vote, he didn’t answer whether he’d accept the outcome of the election. “Hillary kept talking about she’s going to accept, and they never accepted it. You know. She lost, too. She lost good,” he said, ignoring that Clinton conceded decisively the day after the 2016 election.

Democrats and Republicans alike are openly wondering now: What happens if Trump refuses to concede?

Taken together, experts are anticipating an election in which it’s harder to vote, harder to count the votes, less clear who’s won, and more unpredictable than any election Americans have lived through. And that’s if everything goes smoothly.

It’s a certainty that voters will complain about lost ballots and whether their votes were ever counted; they’ll hear stories about (or endure) long lines, unusable machines and literal health risks on Election Day. And even on the smoothest national election days, there are power outages, thunderstorms, fires and random mishaps that could be seized upon in bad faith or by the more conspiratorial to condemn the overall result as unfair or rigged.

It’s also highly probable that the final results could take a long time to tally—in some states a week or more, both for local races and the presidential, particularly in states that require absentee ballots to be postmarked by only Election Day. Officials in those states will see ballots trickle in right through the weekend after the election.

As the days pass, and absentee and mail-in votes are counted, it’s likely Americans will watch results change, as candidates who appear poised for victory on election night see their victories overturned. These swings can be dramatic, as in June’s special election in New York’s 27th Congressional District: There, in a district that Trump won by 25 percent points, the Republican candidate led 70-28 on the night of the election, but won just 53-45 once all the absentee ballots were counted. The reverse happened in Oklahoma in June on a ballot measure to expand Medicaid eligibility: Early and absentee ballots made it look like it was headed to an overwhelming victory—75 percent supported the measure—but in-person votes steadily narrowed that on election day until it squeaked through with just 50.48 percent of the vote.

Stranger things have indeed happened, as it turns out.

“People need to understand that’s not actually a problem. That’s how the system is supposed to work,” explains Dale Ho, director of the American Civil Liberty Union’s Voting Rights Project. “One thing that I am concerned about is that if those election results do trickle in—particularly in those states that were pivotal in the presidential election in 2016, like Michigan and Pennsylvania—you may get some unfounded statements from some quarters that the pace at which the results are being tabulated suggests some kind of problem.”

The protests over all of that—the feelings of disenfranchisement, the surprise results, the late swings, the accusations of voter intimidation and fraud, to say nothing of the murk of accusations and countercharges on social media in the run-up to November—could turn especially combustible and disruptive given the charged political environment that’s already taken root on America’s streets. There are reports that the president’s attacks on the process are already stirring trouble, as right-wing militias ready themselves for violence after November, confident that any Biden victory must be fraudulent. As one senior Democratic campaign official told me: “The question isn’t what is the spark, it’s what is the fire going to burn?”

Any one of these problems above could throw the national election into chaos if a secretary of state—in good faith or bad—takes this into account and refuses to certify his or her state’s vote tally and push us into uncharted constitutional territory. Sure, we technically have procedures in place to deal with such problems—hello, House of Representatives!—but the nation has never really been confronted by a candidate who refused, after the counting stopped, to concede the election. And if there’s one thing the Trump administration has taught us, it’s that even long-standing norms and procedures crumple up quickly when a leader simply refuses to acknowledge them.

If any of that seems like it just can’t happen in our system—remember that Donald Trump was a no-chance novelty candidate when he rode down the golden escalator in Trump Tower in June 2015. Stranger things have indeed happened, as it turns out.