In a report issued Thursday, the NCDHHS said the deaths occurred from Jan.19 to Jan. 25.

The total number of deaths stands at 54 for the flu season, the highest total at this point in the last couple of flu seasons. 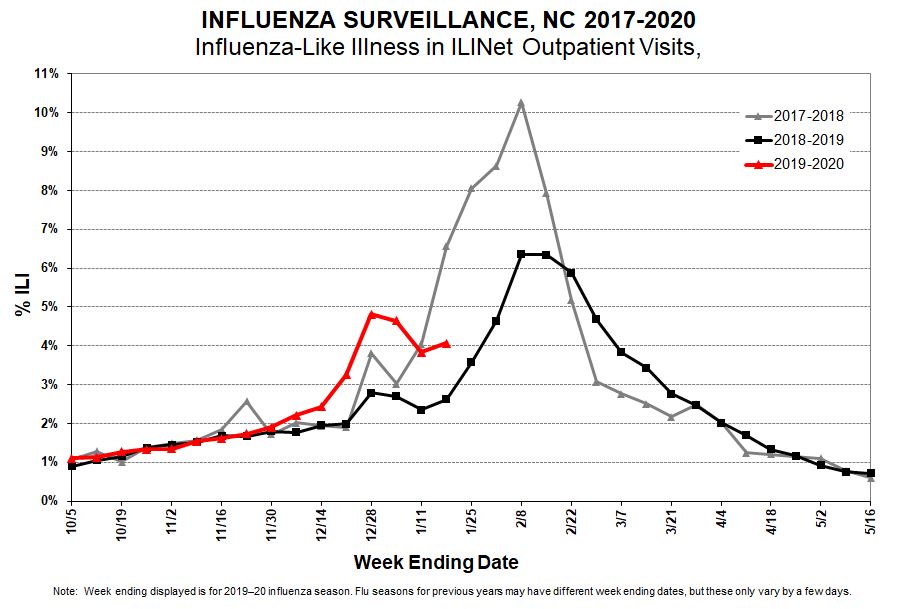 Meanwhile, one local high school cancelled classes for all students because nearly 20 percent of the school called out sick Wednesday.

Eric Grunden, Research Triangle High School’s Chief School Officer said the absences had been creeping up all week when on Wednesday, about 100 of the school’s 550 students called out. Grunden said about the same percentage of teachers were absent as well.

“We have built into our calendar already what we call Digital Learning Days and that means kids can work from home, essentially,” Grunden said. “So we said why not use one of those and let our kids go home and recuperate?”

Grunden said there were only about 11 confirmed flu cases that parents informed administrators about; the other absences were likely students showing symptoms, or due to parents not wanting to send their child to school with other sick children.

Grunden said school staff had taken measures such as sanitizing surfaces to try to prevent the spread of germs, but sick students were still trying to come to school.

“We’re really happy that they want to come to school every day- that’s what we’re trying to create,” he said. “But we also have to pay attention to what the needs of our families are. And so in some cases like we were seeing this week, more and more parents saying well I don’t want my child to go to school because I don’t want them to get sick, well that’s a problem.”

North Carolina has seen more than 200 people die from the flu in four of the last five years. In December, a child in western North Carolina died from flu complications.
You can get a flu shot at several health care facilities. To find a location near you, go here.

The flu season began Sept. 29 and lasts through May 16.

Video is from a previous report and will be updated.