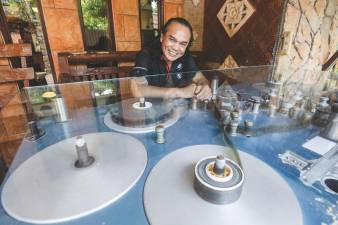 “For many years, my family and I [have enjoyed] holidays in Bali,” he says.

They loved its beaches and wooden resort homes. So, when he decided to built a house on a piece of vacant land in Sungai Penchala, he looked to Bali for inspiration.

The house took nearly 18 months to build, and the family have been living there for the past 10 years.

Almost all the interior accents and furniture were bought in Yogyakarta. It appears Affandi has successfully built a ‘little Bali’ inside his house.

“Now, we make fewer trips to Bali,” he says with a laugh.

Upon entering the home, the first thing that draws attention is the fish pond in the middle of the living room.

Affandi says : “In Bali, you find the fish pond will be out in the garden. I decided to think out of the box, and brought the fish pond inside the home.”

He also built a gazebo at the end of his living room, with a view of the fish pond, making the room feel like it is an island surrounded by water.

“I love the sound of water,” says the renowned film editor, who has worked on most of the late Yasmin Ahmad’s films such as Sepet, Gubra and Talentime.

Affandi’s unique choice of artworks add to the atmosphere. One painting features the front of a bicycle sticking out of the canvas, while the rear end rear of the bicycle is on another.

Usually this kind of 3D art is mostly found in art museums, not in a home.

He says: “I remember the young artist who sold me the painting asking me why I am buying besi buruk (junk).”

Well, the ‘besi buruk’ certainly blends beautifully with the rest of his artworks, which he buys from art students.

He says: “Firstly, I want to help the students. Secondly, I can get the art cheap. I [can say I] got the art before they became famous.”

On the second floor, we got a look at his TV room, where posters of the films he has edited hang on his wall. The awards he has won are also displayed proudly on the table situated by the staircase.

One thing he did before building his house was discuss all his intended renovations with his neighbours.

“The last thing I want to do is to block their view,” he said.

“I do not want to create a hostile atmosphere. I want to get along with my neighbours. You must learn to adapt to your surroundings.”

Facebook
Twitter
Pinterest
WhatsApp
Linkedin
ReddIt
Email
Tumblr
VK
Previous article‘Dramatic’ change in William shows ‘anxieties’ – are they caused by Harry or pregnancy?
Next articleEnd of summer holidays: Half of sandy beaches could be gone by the end of the century