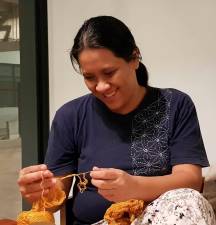 BY DAY, Surya Ismail is a computer programmer. But in her free time, she keeps herself busy making bespoke and custom crafts ranging from crochets and cross stiching, to origami and dyeing. All under the name of Our Craft Empire.

“Our Crafty Empire is my space to make and sell stuff,” said Surya. “I’m a lifelong crafter. My mum taught me origami when I was two, and I’ve been making it ever since. I have to sell what I have made just to make room for more craft supplies!”

The name came about because it was a space for her and her children to learn and make crafts. Because her children were homeschooled, Surya wanted to teach them entrepreneurship as well. They would rent booths to sell their creations at small homeschooling events, as well as public events.

“My kids are bigger, and have gone on to do their own things. But I kept the name Our Craft Empire, and the happy memories with my kids,” said Surya.

Her drive is her love for making things and trying her hand at a variety of crafts. Surya explains that the ability to switch between crafts helps her indulge in what she is passionate about, while avoiding repetitive strain injury.

“I joke that if a craft involves paper, fabric or yarn, I’d probably do it. I’m a bit scatterbrained, so I just switch crafts when I get bored. It also helps to avoid injury. Different crafts use different hand muscles and different postures,” said Surya.

“So when my grip starts to hurt from crocheting too much, I just switch to embroidery or origami. Repetitive motion causes injury. Switching things up helps.”

Her most popular work has to be her crochet figures. They range from original creations, to dolls of popular characters.

“My good friend Angelia always comes up with interesting requests. I made a digital nomad for her once. The base was a knitted knight, with a backpack and a camera to bring him into the 21st century,” said Surya.

“I’ve also made a few dolls based on beloved pets and favourite characters. I’ve made the Lorax, and The Little Prince.”

For her, crochet is a craft that works well and fits her lifestyle as a working mum. Crochet is portable and easy to put down and pick up. It is also sturdy and squishy, perfect for making toys.

“I take custom orders, so I’m able to make unique items that just can’t be bought at shops. I’m happy when the thing I made puts a smile on someone’s face.

“We’ve also sold a lot of tie dye t-shirts. My son’s wardrobe is 90% tie dye t-shirts. I like selling bags made from reclaimed/upcycled fabric, but I [haven’t spent] much time in front of a sewing machine lately.

“Crafting protects my sanity. Boredom is my enemy.”

She noticed that modern life is full of waiting. Waiting for one thing or another. As a ‘work-at-home’ mum, she often finds herself waiting for meetings and downloads.

“My day job is virtual. Crafting ties me to the real world. When you make something, you can hold it, you can use it. It’s a great feeling,” said Surya.

Of course, 2020 has affected both her and Our Crafty Empire as well. While she normally runs a booth at two or three events a year, that doesn’t seem possible this year.

“It’s really tiring, but it’s fun meeting people and getting direct feedback on what people like and don’t like. I miss the human interaction,” said Surya.

However, if you want to get crafty yourself, Surya has some advice for you.

“For beginners, I suggest they tryorigami. Instructions and material are freely available.

“There is a misconception that origami is for kids. Modern origami is precise, surprising and sublime. It’s amazing how far you can go with just a piece of paper.

“Dyeing is also beginner-friendly. My kids and I have taught a range of dyeing workshops. The easiest is dip and dye furoshiki. The colours absorb differently depending on serendipity, and it’s impossible to create a bad-looking furoshiki.”