A defensive Trump begins coronavirus briefing with a political show 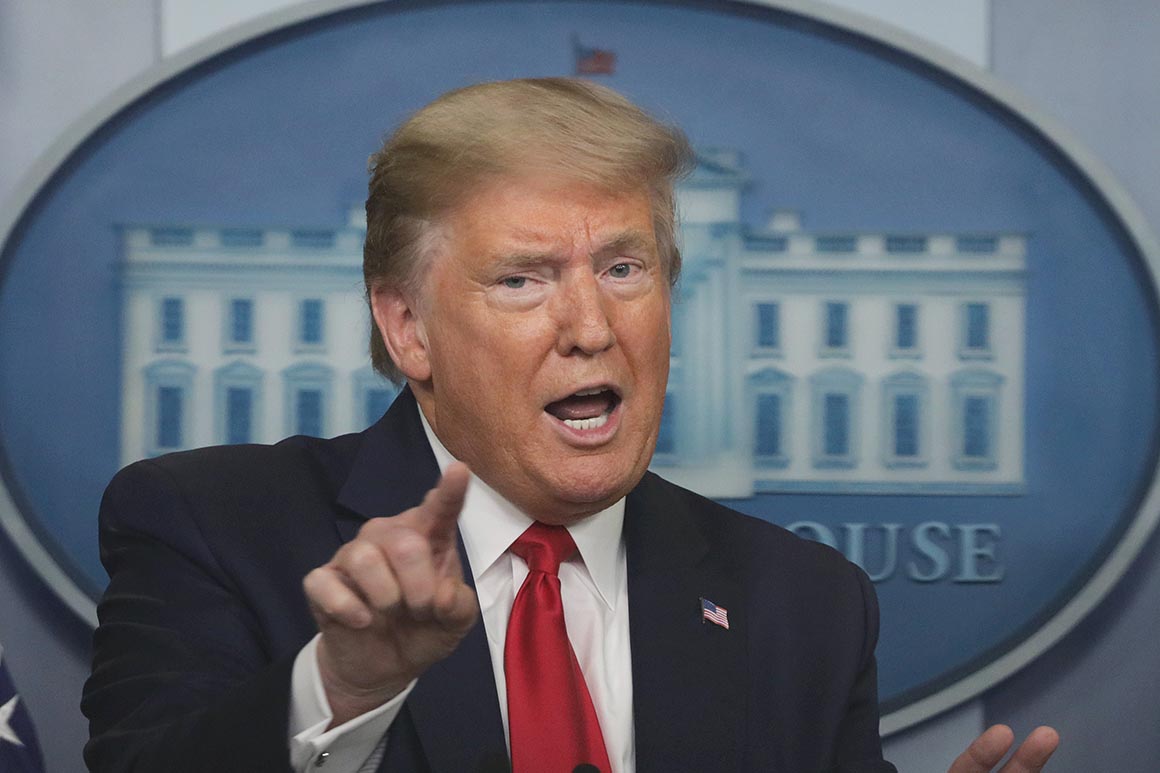 President Donald Trump fiercely defended his administration’s response to the coronavirus during Monday’s task force briefing, complete with a campaign-ad-like video aimed at bolstering his case.

The elaborate — and, by public service standards, remarkable — production came after a weekend when the president’s coronavirus task force held no briefings, which are meant to serve as updates for the public on the unfolding pandemic that has infected hundreds of thousands of Americans and killed tens of thousands.

Instead, Monday’s briefing appeared to be fashioned as a rebuttal to a damning report in The New York Times detailing Trump’s early inaction on the outbreak despite warnings from national security and public health officials, and to criticisms of his coronavirus response writ large. The entire affair lasted nearly two and a half hours, his longest yet of the almost-daily briefings.

Trump began the briefing by expressing his condolences to those hit by severe storms across the South overnight, before bringing up Dr. Anthony Fauci, the nation’s top infectious-diseases expert, to clean up a statement he made over the weekend asserting that earlier mitigation efforts in the U.S. would have saved lives.

After Fauci assured reporters he was offering the walkback of his own volition, Trump retook the briefing room lectern and launched into a full-throated defense of the restrictions he placed on travel from China in late January, a decision he has repeatedly pointed to as evidence he took the virus seriously.

Then he asked for the briefing room lights to be dimmed.

On screens behind him, a montage of the timeline of the administration’s response to the virus began to play, splicing favorable news clips between headings like “the media minimized the risk from the start … while President Trump took decisive action … even as partisans sniped and criticized.”

The first portion of the video, which purported to show coverage of the media minimizing the virus, did not appear to be an independently selected collection of clips, but rather one segment taken from the Fox News show of one of Trump‘s most strident media allies, Sean Hannity. The clips all share the same chyron: “Flashback: Hannity and the media’s coverage of the coronavirus.”

The video also included praise for the president from a bipartisan array of governors. But it left out any criticism of the administration’s response to the crisis, including Trump and his aides repeatedly downplaying the threat of the virus and his administration‘s failure to set up widespread testing throughout the country — missteps that critics say wasted valuable time bought by the travel restrictions.

By the end of the video montage, Fox News was the only cable network that continued to carry the briefing, with CNN cutting to its fact checker and MSNBC blasting the political bent of the event.

When the video ended, Trump boasted to reporters that there was more where that came from. “We could give you hundreds of clips just like that. We have them,” he said. “We didn’t want this to go on too long.”

Asked why he felt the need to show such an overtly political message in the briefing room, a presentation that one reporter pointed out “looked a bit like a campaign ad,” the president responded simply: “So, we’re getting fake news and I like to have it corrected.”

He said the video had been put together in about two hours by Dan Scavino, the White House social media director and Trump’s reelection campaign manager, and a few others in the press office.

“I wouldn’t use the word ‘produce,’” the president told reporters. “All they did was took some clips and they just ran them for you. And the reason they did is to keep you honest. I don’t think that‘s going to work. It‘s not going to have any impact, but just think of it. You heard the clips. You heard what I said.”

The rest of the briefing played out in the same combative manner in which it began, with Trump lobbing insults at political foes like former Vice President Joe Biden and House Speaker Nancy Pelosi.

Trump continued to grouse about media coverage of his administration’s coronavirus response, lambasting CBS News’ Paula Reid for pointing out that the timeline just played to reporters showed about a one month‘s gap in February between the time Trump restricted travel from China and the first clip of the president speaking authoritatively on the virus.

“You’re disgraceful,” the president told Reid, while declining to offer any specific answers to her question.

“A lot. A lot. And in fact we‘ll give you a list,” Trump replied when she asked what the White House had done with the time it bought from travel restrictions. “We did a lot.”

The president sought to explain away his administration’s response by comparing it to other countries that were slower to restrict travel and order residents to stay home, though the U.S. has passed all those other countries in deaths from the coronavirus.

“I could have kept it open,” Trump exclaimed. “I could have done what some countries are doing. They’re getting beat up pretty badly. I could have kept it open. I thought of keeping it open, because no one‘s ever heard of closing down a country, let alone the United States of America. But if I would have done that, we would have had hundreds of thousands of people that would right now be dead. We’ve done this right and — we really have done this right. The problem is the press doesn’t cover it the way it should be.”

At another point, Trump asserted that not only was his administration’s response to the crisis not delayed, but that “we were way ahead of schedule.” Later, he boasted again: “Everything we did was right.“

Another point of contention in the briefing came when the president was asked about his proclamation earlier in the day that he was the only one who could reopen parts of the economy brought to a standstill by social-distancing mitigation efforts, a stance putting him on a collision course with governors uneager to return to normalcy without the outbreak under control.

“When somebody‘s president of the United States, the authority is total,“ he said when asked about the governors‘ plans. “And that’s the way it’s got to be. It‘s total. It’s total. And the governors know that.“

That assertion runs counter to the views of legal scholars, however, who say the federal government lacks the power to directly order states to reopen their economies. His claim came hours after governors on the East and West coasts banded together to produce regionally coordinated plans for reopening their states on their own timelines.

“If some states refused to open, I would like to see that person run for election,” Trump responded when asked about states’ Tenth Amendment rights under the Constitution. “They are going to open.”

The president hinted that his administration’s legal experts would soon weigh in on the issue.

“We are going to write up papers on this. It’s not going to be necessary, because the governors need us one way or the other because ultimately it comes with the federal government,” he said, adding: “That being said, we are getting along very well with the governors and I feel very certain that there won‘t be a problem.”

Asked whether any governors had agreed to take his lead on reopening the country, the president responded curtly: “I haven‘t asked anybody. You know why? Because I don‘t need to.“