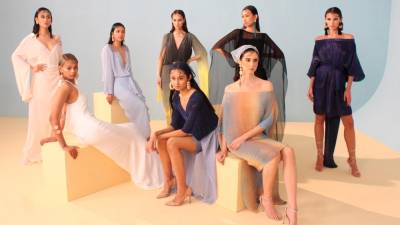 THE city of Kuala Lumpur recently had a go at a digital fashion week. Once a closed-door event opened to only invited fashion socialites and celebrity figures, the event has now adapted itself into a largely digital affair in order to curb the relentless spread of Covid-19.

In spite of various pandemic-induced restrictions, the designers embraced their unbridled creativity and showcased their artistic virtual presentations through fashion storytelling.

From the poetic and surreal, to the dramatic and mysterious, here are the highlights from the Kuala Lumpur Fashion Week 2020.

Summer holidays and glitzy parties seem like a distant memory, but Alia Bastamam transported us to paradise with her Resort 2021 collection titled Horizon, where the gradient hues overlap between the sky and the sea on the horizon during a dazzling sunset.

Alia distilled the fleeting magical hours of the sky into an enduring sight by way of flowing chiffon in ombre tropical colours with the revival of some of her iconic designs, like the tail kaftan and billowing butterfly dress. Ruffles come alive in pleats that bring to mind hand fans and beach parasols for an imaginative island getaway.

With dreamlike beaches floating in her mind, Alia shares: “It’s all about pushing my brand’s resort aesthetic further, but how would we dress up in times like these? I made sure my designs were light and free – easy, effortless looks with max impact, so everything flows comfortably without constricting silhouettes.”

“There’s just something about infinite ombre hues that lets your soul feel free and takes your mind to places without even moving,” she adds.

In other words, the collection inspires us to look beyond the horizon.

Shot in a ‘mystical’ forest, the collection of comfy sweaters and sweatpants are rendered with tie-dye prints and graphic motifs in a spectrum of pastel and psychedelic colours.

“Athleisure is the new casual,” says the designers, who found timely resonance of both the art and cultural movements in the year 2020.

The hippies imbued their free-spirited way of life within tie-dye prints, which became a symbol of peace and counterculture, whereby Pop artists such as Andy Warhol and Roy Lichtenstein emphasised upon the banal or kitschy appeal of their time.

“2020 has a lot of similarities with the 1960s and 1970s – including ever-prominent battles over civil rights, women’s rights and environmental movements,” they add.

An air of surrealism wafts through the atelier at Mimpikita, sweeping creative director Nurul Zulkifli off her feet as she embarks on a journey from reality into fantasy in the brand’s Spring/Summer 2021 collection.

Told through the whimsical film, Splendour in the Woods, Nurul took a deep dive into a far stranger realm of make-believe – an enchanted space filled with unbound freedom, joy and possibilities to keep the ‘Mimpikita dream’ alive.

“When exploring a different realm, we’ve become fearless and formed the experimental unfamiliar side of Mimipikta. We want to bring back the excitement of dressing up, hence, we introduced prints with personality.”

The collection embraces the vintage, by indulging in a little fashion fantasy through mixing up elements from various textile materials and layering them with embroidered details where soft and bright colours collide and balance each other to make a subtle statement.

Syomir explained: “It’s a strange period that we’re living in right now and the perfect time to experiment. In the beginning, I was slightly hesitant of proposing something so unusual to my audience, especially to those who are familiar with the DNA of the brand, but I trust Zahir’s work, he has a vision of how he’d like to portray my garments.”

Set in a parallel world, the seven-minute cinematic film follows a story which centres around a band of rebels. With baseball bats and batons in hand, they put on their strong personalities and face challenges head-on; as a reference to the pertinence of our time.

The brand’s latest pieces merged its classical past with the contemporary present to reflect its intersectional blend of traditional and modernity.

These trying times that we find ourselves in clearly did not dampen the spirits of eponymous designers Rizman Nordin and Ruzaini Wan Jamil. The two decided to go all out with their digital presentation of their Spring/Summer 2021 collection to celebrate fashion with all the glitz and glamour it’s known for.

Elsewhere, 10 of Malaysia’s finest models were styled in elegant dresses, including arguably the most extravagant sweaters that were designed to impress.

To say that we were surprised by Rizman Ruzaini’s grandiose sensibilities would be an understatement.