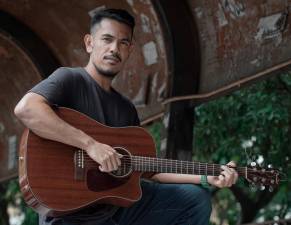 HE has one of those soothing voices you hear in advertisements, and for many years he read the traffic report for a major radio station.

What many do not know is that Megat Zahrin, 37, is also a talented voice actor (Ejen Ali, Ejen Ali The Movie, Upin & Ipin, Pada Zaman Dahulu, Rimba Racer) and singer, with a song called Beautiful and who sang the track Cahaya from the documentary Malaysia vs Covid-19.

He also used to be part of a rock band.

“[Currently] I am a full-time voice-over talent,” Megat said during our interview.

His journey to become a voice-over talent did not begin with someone telling him he had a voice for radio. Instead, it was something he went into by chance in 2013.

“It was by accident, really. I actually started out by writing for Les’ Copaque Production, the production company behind Upin & Ipin.

“I started there as a writer for one of their IPs called Pada Zaman Dahulu. At the same time I was involved in a singing competition, Dentyne Terra Oke 2011.”

He emerged as the champion in that competition.

“Because of that, the bosses gave me the chance to sing the theme song for Pada Zaman Dahulu. They also encourage their staff to take on multiple roles in the company, and that is when I started doing voice-over work. I would normally do the voices for the bad guys.”

With the encouragement of his friend who used to read traffic reports for a major radio station, Megat applied for the position when there was a vacancy, and for nine years (until May 2019) he was the voice over the airwaves warning us of which roads to avoid, and the hazards we might encounter on our journey.

However it was the song Cahaya that really put him at the forefront, not only because he sang it but because he also wrote the lyrics.

Turns out that one of the companies for which Megat was working as a freelance writer was Red Communications, which produced Malaysia vs Covid-19.

He was approached by executive producer Lina Tan to help translate a Mandarin song that was written by renowned singer-songwriter Aniu.

Using the rough translation of the song given to him, and after viewing the documentary himself, Megat wrote the Bahasa Malaysia lyrics for Cahaya.

“I wanted to get a feel for the documentary, and Lina said it has to be an inspirational song, but it should evoke some feeling of hopelessness and sadness. So I then wrote the verses.

“It starts off quite hopeless and sad, and then towards the chorus it gives some hope and strength. That was where I was coming from.

“I then wanted to show Lina how to render the song, so I recorded a rough version of how it was supposed to sound and was kind of hoping she would pick me to sing it. I passed it to her and she really liked the lyrics a lot. She didn’t really mention anything about me singing until maybe a few days later.”

Tan offered him the opportunity to record the song, and he was honoured to do it.

He got to work with Aniu, who actually recorded the song earlier this year in Mandarin.

“It was an awesome experience working with him. It was the first time I was working with an actual musician who is in the business. He made me feel inspired. I would like to get back to doing music but I know how hard it can be. But I will give it a shot.”

“Writing traffic reports is as factual as I get. I wouldn’t say it was my passion to be a traffic reporter, but it opened doors for me to get voice acting gigs. In my heart I have always been an artist doing music and films and stuff.”

His own experience with the Movement Control Order was not easy. “Since I am a voice-over talent, all they need is my voice. So it kind of worked. What was hard was staying home, cooped up with the entire family. That was the challenging part.”