A feud over face masks and pandemic relief: Congress returns 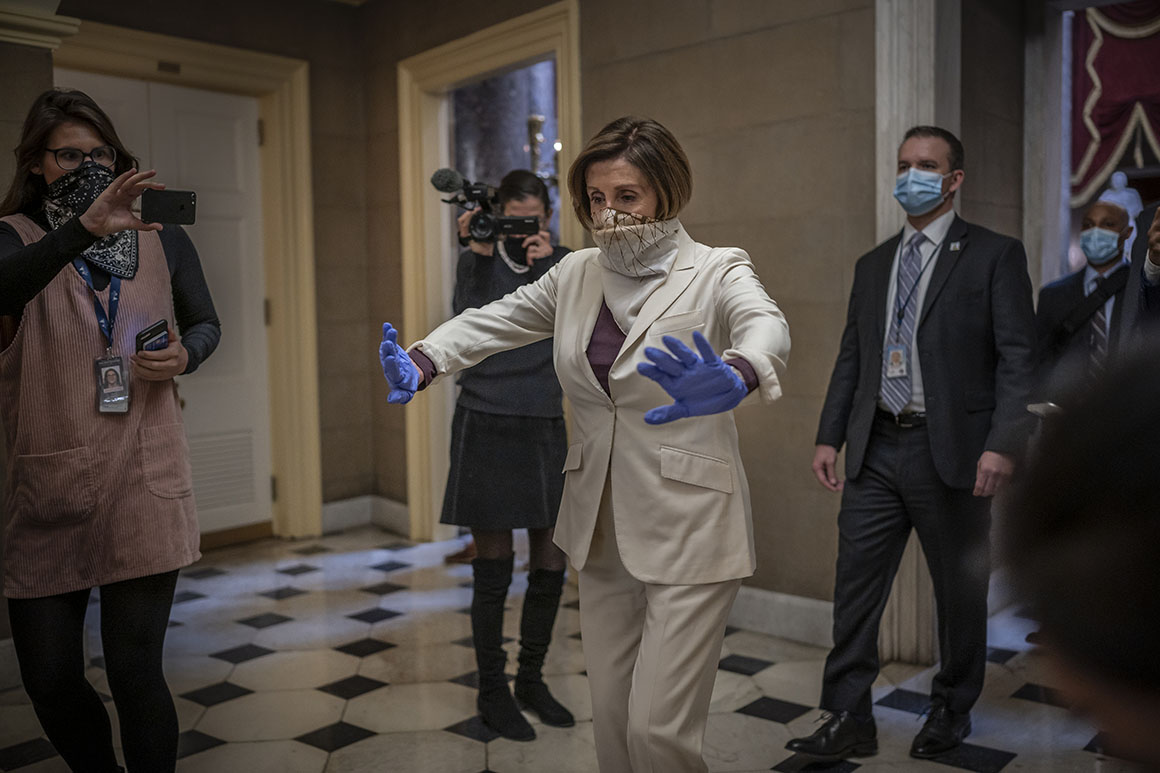 For the first time in nearly a month, House members returned to a largely deserted Capitol Hill. Congress — like the entire country — seemed changed forever. Or maybe not.

They came by plane, train and automobile, with some lawmakers driving for days to get back to Washington to vote on a $ 484 billion coronavirus relief bill. They fought, as usual, about everything. Who was to blame for the two-week delay in passing the latest aid package? Why wasn’t Speaker Nancy Pelosi bringing them back into regular session immediately? Why hasn’t President Donald Trump done better on testing and PPE?

There was even a partisan split over face masks.

A group of at least a dozen House Republicans pointedly didn’t wear masks during the House vote, even while hundreds of their colleagues — and all but seemingly one Democrat — were doing so. Their excuses for abstaining were flimsy. “I didn’t want to take one from someone who needed it,” or “I left mine in my office” were offered, if they didn’t run away from the question posed by reporters. The culture war happening throughout the United States over the coronavirus was also playing out on the House floor.

And like the rest of America, lawmakers grieved for friends and family members who were suffering from a disease that’s already killed more than 45,000 of their fellow citizens. Rep. Maxine Waters (D-Calif.) announced that her sister was “dying in a hospital in St. Louis, Mo., right now, infected by the coronavirus.” Waters dedicated the bill to her. Other members held up photos of dead constituents, openly weeping on the floor for the victims.

“Yes, I know a number of people who have died, unfortunately,” added Democratic Rep. Jerry Nadler, whose New York City district covers parts of hard-hit Manhattan and Brooklyn. “We’re still having a large number of deaths, although thankfully that’s been going down because we’re practicing social distancing. We’ve closed the place down basically, and it will have to continue for a while.”

Getting to Washington wasn’t easy for some. GOP Rep. Mike Simpson made the 33-hour drive from Idaho Falls, Idaho starting before dawn on Monday morning. Simpson arrived late Tuesday night — stopping only to sleep and stretch his legs. Rep. Billy Long drove back with fellow Missouri Republican Jason Smith. When asked how it was, the former auctioneer only said, “Long.”

With air traffic severely curtailed, some lawmakers found themselves with unusual travel companions. Democratic Rep. Elissa Slotkin of Michigan said her flight included not just members of her state delegation but lawmakers from Utah — whose direct flight to D.C. had been canceled.

Members were also worried about getting home with fewer flight options. Rep. John Yarmuth (D-Ky.) said the next flight home was 3 p.m. Friday, while fellow Democrat Ben Ray Lujan of New Mexico said direct flights back to his home state have been canceled.

GOP Rep. Richard Hudson took a different tack. He simply never went back to North Carolina after Congress adjourned on March 27, remaining in D.C. with his family instead.

“I’ve been here, never left,” Hudson said. “I’ve been in the office every day and working.”

Once they did get to the Hill on Thursday, most members huddled in their offices as instructed by leadership, although a half dozen sneaked into the empty Visitors’ Gallery to watch the floor debate, despite being asked not to do so.

Others roamed through the House buildings alone, taking direction from masked floor staff without their usual entourage of aides. There were no clusters of close-knit colleagues sitting together on the floor or slapping each other on the back. The House’s basement cafe, a favorite for lawmakers on the go, was mostly deserted, offering just a bare-bones menu.

"Politicians are extreme extroverts and suddenly you can’t go out and press the flesh," Rep. Jamie Raskin (D-Md.) said, noting the inability of members to comfort each other amid the crisis. "That’s tough."

Raskin said conversations that may normally have happened in hallways or caucus meetings have moved to text or Zoom. Raskin joked that all Democrats have become tech masters except Majority Leader Steny Hoyer “whose middle name is ‘Oops I forgot to mute myself.’” 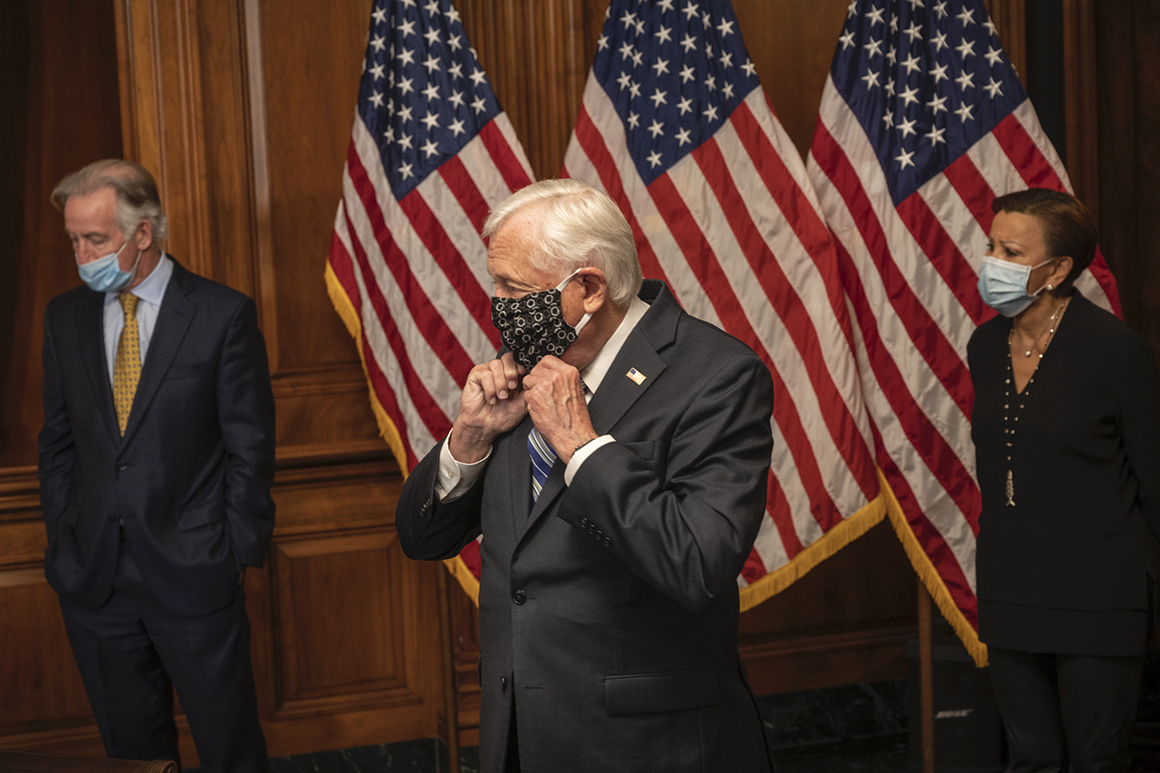 Members also understood the extraordinary circumstances they were living through. Much of the country remains on involuntary lockdown, with more than 26 million Americans out of work and tens of thousands of companies shuttered, many permanently. Members desperately want to do something, anything, to respond to the barrage of desperate calls coming into their congressional offices, but also recognize they are potentially endangering each other just by being in the same building together.

“Ever since I’ve come to Congress, it’s always been bizarre situations,” said Rep. Robert Aderholt (R-Ala.). “As a freshman, it was the impeachment of Bill Clinton. Then it was 9/11 [attacks] in 2001. Then, of course, the second impeachment, and all the things in between. And now this. This is just sort of par for the course.”

Special care was taken to shield lawmakers from catching or spreading the coronavirus. When it came time to vote, members cycled through the floor alphabetically in groups of 50 to 60 rather than swarm the chamber all at once like usual. The process dragged out for more than an hour during each of two votes.

As they entered the House chamber, there were also stations that held masks, gloves and giant bottles of hand sanitizer. Members were advised to employ social distancing — “Please stand at least six feet apart” read signs all over the floor.

When it was Rep. Henry Cuellar’s turn to vote, the senior Texas Democrat turned to the small group of staff and colleagues and shouted: "I miss y’all!"

Cuellar, who is quick to chat up other members or reporters in hallways, held up his hands and offered a pretend embrace. "Hugs, hugs, hugs!" Cuellar said loudly from the floor as he exited. 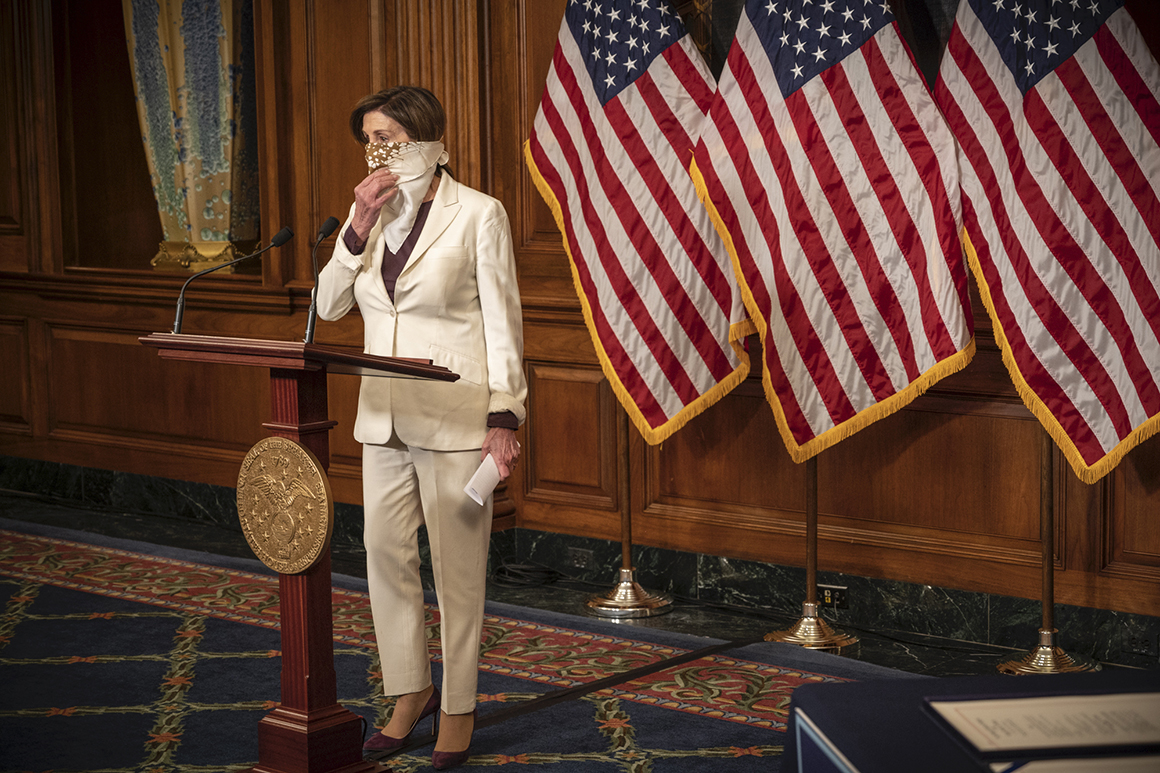 Pelosi herself — clad in blue latex gloves and with a white scarf over her face — stood in the back of the chamber to serve as impromptu traffic cop as members meandered slowly. The first vote took 87 minutes, and Pelosi was pleased by the process.

“Fabulously, it went fabulously,” the speaker gushed as she left the chamber.

Then the House was closed for 10 minutes between votes so Capitol employees could speed-clean every surface in the chamber. The dozen-plus House employees were supposed to do the job in 30 minutes, but they frantically called out the time to one another as they worked and finished in a fraction of the allotted period. Reporters watching them applauded the effort.

Members also accomplished some work of their own. On a party-line vote, the House created a new select oversight committee — to be chaired by Majority Whip Jim Clyburn — on the coronavirus relief effort. The panel is “charged with ensuring the efficient, effective and equitable allocation of the trillions of dollars in taxpayer funds” approved by Congress, Clyburn said in a statement.

Clyburn, though, couldn’t say exactly when his panel was going to start meeting or who would be on it. “I have no idea. I suspect I will be talking to the speaker over the weekend,” Clyburn said after the vote.

The House then passed the $ 484 billion rescue bill on an overwhelming vote of 388-5 that masked the partisan recriminations underlying the effort.

As part of that aid package — the fourth approved by Congress since the crisis began — $ 381 billion is for small businesses, $ 75 billion is going to hospitals, and $ 25 billion will be spent to ramp up what Democrats complain is “woeful” national testing efforts.

Democrats noted that the White House had originally only asked for $ 250 billion for small businesses, and argued their efforts made an incomplete bill far better.

“The bill that passed today could have passed two weeks ago,” Hoyer said, if not for Republican resistance to Democratic priorities. “It’s a shame that it took a couple of weeks to get there.”

Republicans countered that the delay hurt thousands of small business that were unable to get loans because the Small Business Administration loan program ran out of money.

“This bill is 16 days too late. We could have agreed to this in 16 minutes,” said Rep. Kevin Brady (Texas), the top Republican on the Ways and Means Committee.

The House is not formally scheduled to meet in full session until May 5, yet even that is a source of disagreement.

Democrats had initially planned on authorizing some limited proxy voting on the floor this week, which would allow some lawmakers to vote remotely during the pandemic. But House Minority Leader Kevin McCarthy (R-Calif.) and other Republicans had bitterly opposed the plan, and Democrats held off on pushing a change in the rules.

On Wednesday, Hoyer and McCarthy met for over an hour in the Capitol basement to discuss proxy voting as well as the prospect of holding hearings remotely. They failed to reach any kind of consensus, with Republicans objecting to whatever the Democrats proposed, while also beating up Democrats for not wanting to work, according to sources who attended the meeting.

“We had a discussion about a lot of different options. We’ll continue to discuss those,” Hoyer said leaving the meeting, which perfectly sums up everything about Congress right now.