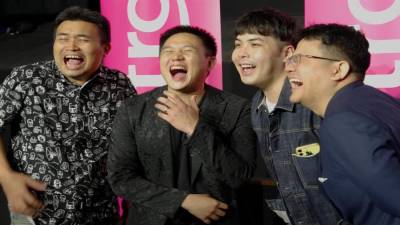 Based on the events surrounding the MACC Mania X: The Goodbye Tour in 2019, the six-episode M.A.C.C. series will reveal never-before-seen footage as produced, written and directed by the youngest member of the group, Kuah.

During a special screening of the first two episodes of the show, Kuah explained that prior to the tour, Astro approached them for a 15-minute long video, before he proposed a comedy-documentary instead.

“They took a chance and got it. That was good for us, but it also meant we had to scramble for things, as we had to travel to many places for the tour while also capturing footage,” he explained.

Queried on the authenticity of the footage in the off-kilter first two episodes, Kuah explained that as much as he wanted to create a “pure documentary”, it was too risky in case they ran out of material.

Kuah indicated that due to those concerns, the comedians decided to blur the lines between reality and fiction, improvising their way throughout parts of the series.

“With that in mind, I knew the kind of storyline that I wanted, based on my knowledge of touring with them over the last ten years. In a way, I wrote the narrative arc based on that.

“In terms of scripting, I gave them dummy lines but very often – and this is the ‘bad thing’ with filming standup comedians – we like to surprise people with jokes. Which is what they did while I was shooting.”

M.A.C.C. member Leong said that the content of the show was as natural as possible, containing real-life events from that period.

“Like, my wife was actually pregnant at the time of the shoot, and the storyline about me being worried about not being there when she was giving birth is true, because our schedule was so packed. I had to come back from East Malaysia to go to the hospital,” he said.

Lim, a breakout star of the Kopitiam series from the late 1990s, noted that the series is ultimately about the four of the comedians who make up the M.A.C.C.

“It is about our friendship, and what it is like going on tour as a comedian,” he said. “Many people do not know about what goes on in the background. We find it interesting, and hope the audience finds it interesting as well”.

While the first two episode takes place in Kuala Lumpur and Selangor, the cast noted that from episode three onwards, the series becomes more interesting because of the change in locations, with the documentary taking viewers to locations across Malaysia, Singapore, Hong Kong and Australia.

Phoon, who is also an actor and scriptwriter, added: “We’re very grateful that wherever we went, we could say things like ‘It was almost sold out’.

“It’s very surprising that this show was very successful, especially in Hong Kong with the demonstrations that were going on, where so many people braved through the tear gas and what not to come to our show.”

The new comedy documentary series by Astro is currently airing daily at 8.30pm until Sept 15 on Hello (CH 702) and Astro GO.

Astro customers will also be able to stream previous episodes on demand.