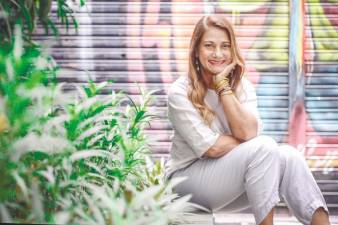 Joining the local Caremongering group was an eye-opening experience for Datuk Yasmin Yusuff. It made her realise the complexity of doing charity, and how it has evolved to include more of those who are in dire need, especially during these troubling times.

Her story began during the movement control order (MCO), which started as a two-week lockdown. As it was continually extended, Yasmin took it as an opportunity to do things that she always wanted to do, like gardening, learning to use her digital camera, and cleaning up her study.

“Within a week I got a message enquiring if I was interested in helping needy people, to give out food boxes, and donations. So I donated.

“But a girl at Caremongering asked me: ‘why not join us?’. I asked her if they needed more donations as I could ask friends if they would like to contribute. But, suddenly I became the co-admin of our little group.”

Caremongering is an altruistic movement that started in Canada. Localised and driven on social media, it organically became a global movement to spread good in communities.

“During the MCO, when no one was working, I started asking friends to donate money. And we raised so much money, and they were offering more. So, using the donations, we made food boxes that contain all the essentials.”

Social media activities and communications in Caremongering are divided into two categories: #ISO or ‘In Search Of’, for those who need help, and #Offer, for those who are offering to help.

“We communicate through WhatsApp groups for our ISOs,” said Yasmin.

“For all those who are in need, there is a form where they can register and tell us their details and what are their needs.

“During the MCO, we helped over a thousand families. We also helped large groups of refugees. And I learned so much, I didn’t know we had so many refugees in Malaysia from all over. And that is just in Ampang,” said Yasmin.

Her role at Caremongering was to vet the ISO requests. She had them all laid out on a spreadsheet, sorted by their needs and priorities, and marked if their requests had been addressed. For example, those with infants were attended to first.

“That’s the most mentally and emotionally stressful role. You have to decide who gets help. And people lie and cheat to get what they want, even when they don’t need it.

Because there were so many people and organisations helping at the time, including the embassies of foreign countries, they would collate the list of families in need and those whom they had helped before, so that could go further and help more people.

“There are those who ask every organisation that they can for help. I don’t blame them. Previously they might not get responses at all. But for the help to go further, we notify each other when a group or family has received assistance, so we do not overlap.

“Foreigners and refugees who needed help were all daily workers, handymen, and general workers who were not earning much, to begin with,” said Yasmin.

The most frustrating part, however, were encounters with those who did not need help but who lied to get it anyway.

To counteract that, each organisation does its due diligence, keeping records and doing follow-ups, to make sure not only that those who really need help are getting what they need, but also to make sure that help gets to those who are actually in need. This information is then shared with all organisations.

“One of the most wonderful thing about Malaysians is that they don’t take handouts. They don’t want money, they want business. They want us to help them get customers. So we promote them on our digital platforms,” said Yasmin.

Additionally, the organisations also hired these budding entrepreneurs to provide food to help the needy, and even as thank you gifts to each other.

On the other hand, as seen in a recent case, there are also Malaysians who abuse those who are in need, sending lewd and abusive messages to those whose businesses were promoted on digital platforms.

“It is very sad to see this happening. However, this does not discourage victims to continue to empower themselves to become independent,” said the former beauty queen, actress, singer, award-winning radio announcer, voice actor and currently, an emcee.

You can follow Yasmin on Instagram at @yasminyusuff, and if you are looking for an emcee for your next event, do give her a shout.