A girl of many talents 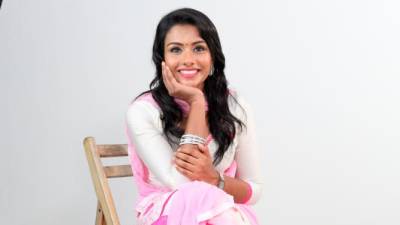 YOU may recognise her for her acting roles, or may have seen her as a presenter on Astro Vinmeen, but there was a time when Agalyah Maniam was heading for a career in the corporate sector.

Agalyah had just earned her degree in accounting and finance, and was on her way to becoming an auditor in a multinational firm.

“I really thought I was going to pursue a career in auditing,” she said.

While she was still studying, she made a brief appearance in a short film titled Kathal Jakrethey, which starred her friend Yuvaraj Krishnasamy, who used it as part of his resume for acting opportunities.

Local director K. Kavi Nanthan saw the film, and thought that the photogenic Agalyah would be perfect for his next project.

Agalyah recalled: “While I was in my last semester at Sunway University I got a call from director Kavi during my semester break. He wanted to know if I was interested in acting.”

She said yes, and Kavi cast both Yuvaraj and her in another short film titled Venpa, which was released in February 2017.

She also starred in her first feature length Tamil film Jhangri, which was released later that year.

“I got a call from Astro asking me to audition for a job as a programme host.

“I never dreamed of becoming an actress or host. It is something that just happened.”

She then became well known as a TV presenter on the Tamil-language programme Vizhuthugal, and even starred in her second feature length film in 2019, an expanded version of Venpa, featuring the same cast and director.

When asked what made her turn to acting instead of a more stable career in auditing, Agalyah said: “I have this thing in me where I like to take up opportunities, I like to be adventurous. I don’t like staying in one place.

“When I was doing my internship, I realised that auditing was not for me. I am a people-oriented person. I was actually thinking of going into public relations or human resources.

“I don’t know if God heard me but that was around the time I got a call from the media industry. I developed an interest in acting after shooting for Venpa (the short film). So when the opportunity came my way, I grabbed it at the right time and made use of it.”

She believes that one should be open to exploring different things.

This year she was featured in TV series Tamillectumy, the first Tamil series produced by Astro.

The 27-episode series had completed shooting before the start of the movement control order (MCO) in March.

She was excited to heard about her character, a carefree young woman who is forced to do something that the real Agalyah would never do, which is take her own life. “It wasn’t easy but I am glad I managed to pull through. I am glad to get many compliments for it.”

On top of her other jobs, Agalyah also teaches yoga.

“After I finished my A-Levels, I was on a break. That was the time I decided to take up yoga, something I have been passionate about since I was young. I was active in sports and I like doing physical activities.

“My journey with yoga started with me doing the asana physical poses on my own. After I finished school, I wanted to learn what yoga was all about. So I started my teacher’s training course with the Sakthi School of Yoga under my master S.K. Durai. Right after I finished my degree, I started conducting classes for yoga.”

During the MCO, she ventured into teaching yoga online.

As for her future plans, Agalyah said she has plans to venture outside of the entertainment industry.

“I want to have my own training company. I just finished my HRDF course to be a trainer. I want to make a difference in society. Whatever role in films or drama that I take up, I want it to be something that will make a difference to the audience. So that is my mission.”

She is open to trying her luck in the Indian entertainment industry, and hopes to do it after the pandemic.

Right now she is concentrating on some upcoming variety shows that will be aired just in time for Deepavali in November.