A GOP Congressman Officiated A Same-Sex Wedding. Now He Faces A Primary Challenge 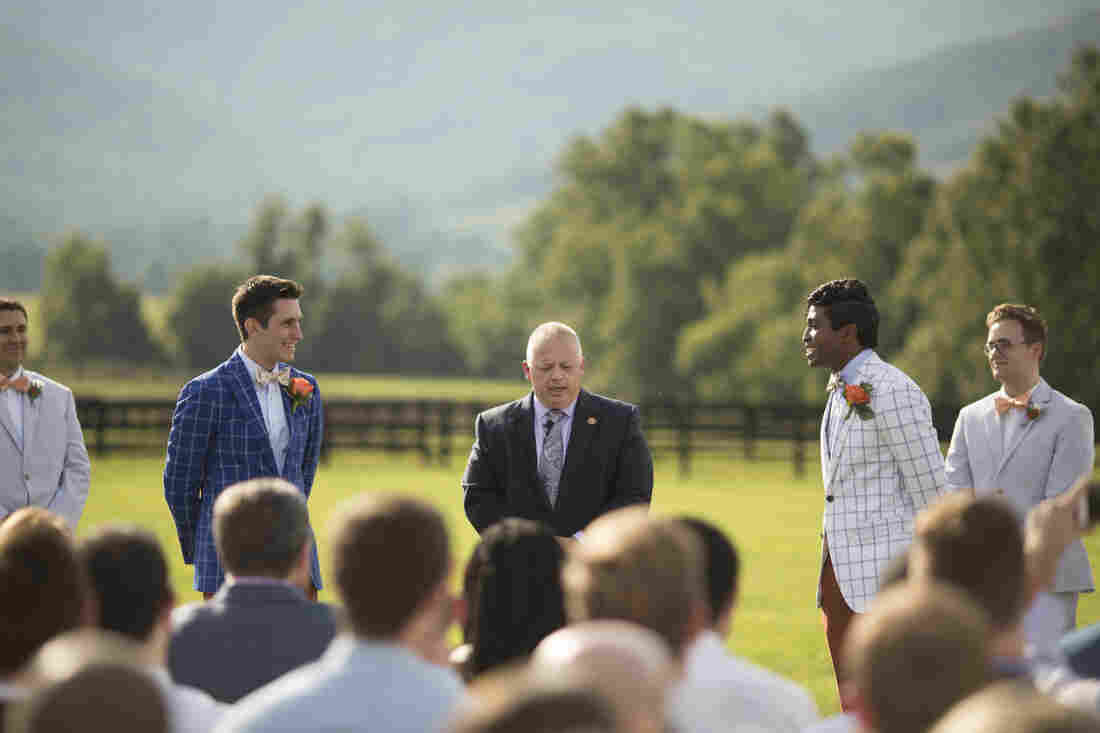 Rep. Denver Riggleman, R-Va., center, officiates the wedding of Alex Pisciarino, left, and Rek LeCounte, right, in July 2019. Some of Riggleman’s Republican opponents have seized on Riggleman’s decision to officiate a same-sex wedding to argue he is out of step with the GOP. Jamie Sivinski/Mirage Photography hide caption 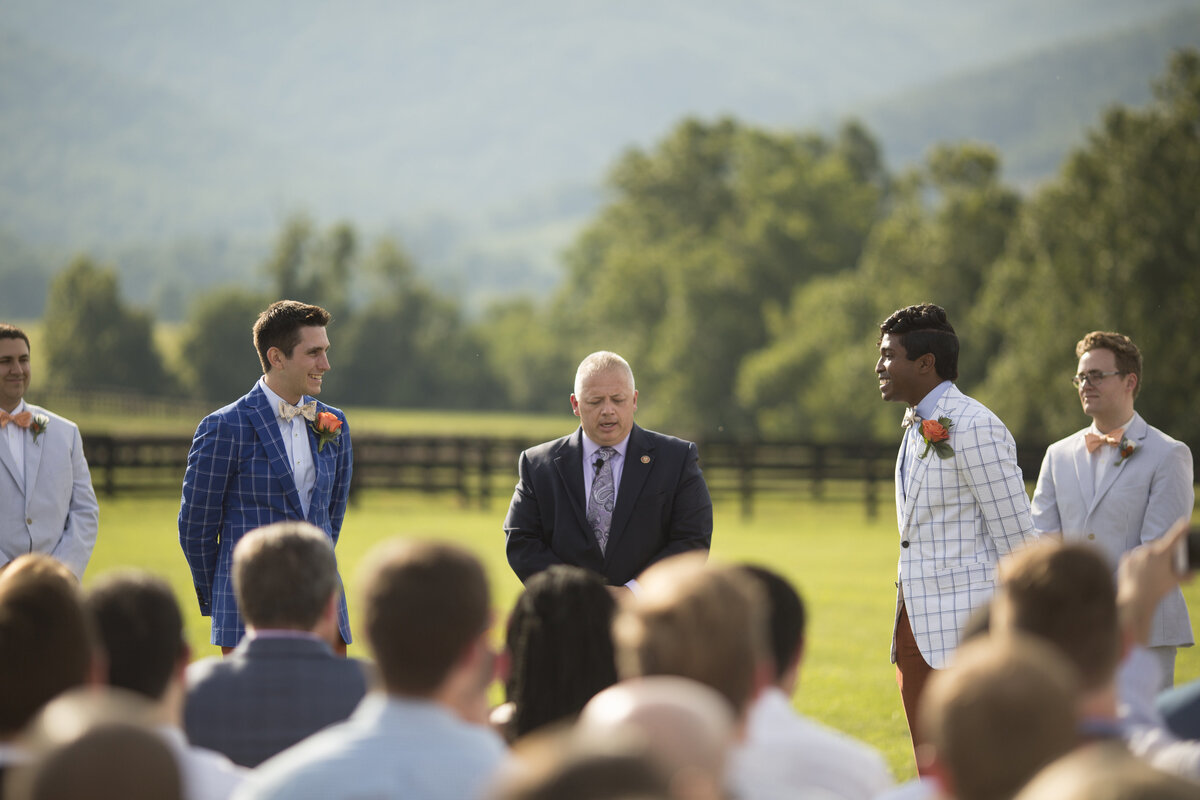 Rep. Denver Riggleman, R-Va., center, officiates the wedding of Alex Pisciarino, left, and Rek LeCounte, right, in July 2019. Some of Riggleman’s Republican opponents have seized on Riggleman’s decision to officiate a same-sex wedding to argue he is out of step with the GOP.

Alex Pisciarino and Rek LeCounte’s wedding day last July was hot — the kind of soupy mid-summer heat that slows the South to a crawl.

“We warned everybody to wear seersucker and some light fabric,” LeCounte said. “And some folks didn’t didn’t listen to us and you could tell how they wish they had.”

The couple was married by Rep. Denver Riggleman, R-Va., who represents Charlottesville and southwestern Virginia. They’d volunteered for Riggleman’s 2018 congressional campaign and liked his libertarian brand of conservatism.

“I’d have been a coward if I didn’t,” Riggleman said of the request in an interview. “The Republican Party is the party of Lincoln, we’re the party of individual liberty.”

But it’s also the party whose 2016 national platform called marriage between a man and woman “the foundation for a free society.” A 2019 Pew poll found around 45% of Republican voters support same-sex marriage, a number that has steadily increased over time.

The wedding sparked a backlash and nomination challenge from Bob Good that may cost Riggleman his seat when local Republicans members meet this weekend for a convention to ratify their party’s candidates this fall’s election. For Good, a born-again evangelical Christian and former Liberty University athletics director, Riggleman’s laissez-faire approach to same-sex marriage is emblematic of failings that make him unfit for office.

Congressman @Denver4VA Riggleman is a true CONSERVATIVE leader who has done a great job for Virginia and will support our #MAGA Agenda. He defends our right to bear arms, protect our Borders & help small businesses. Denver has my Total Endorsement!

Virginia allows political parties to choose between an party-run nominating convention or a primary. Riggleman’s fate rests with roughly 3,500 party activists at a drive-in convention set for Saturday.

The relatively small number of convention-goers could mean Riggleman is in trouble, according to Kyle Kondik, managing editor of Sabato’s Crystal Ball at the University of Virginia Center for Politics.

“It restricts the people who can participate to people who are involved Republican activists who are more conservative even than your average Republican primary voter,” Kondik said. 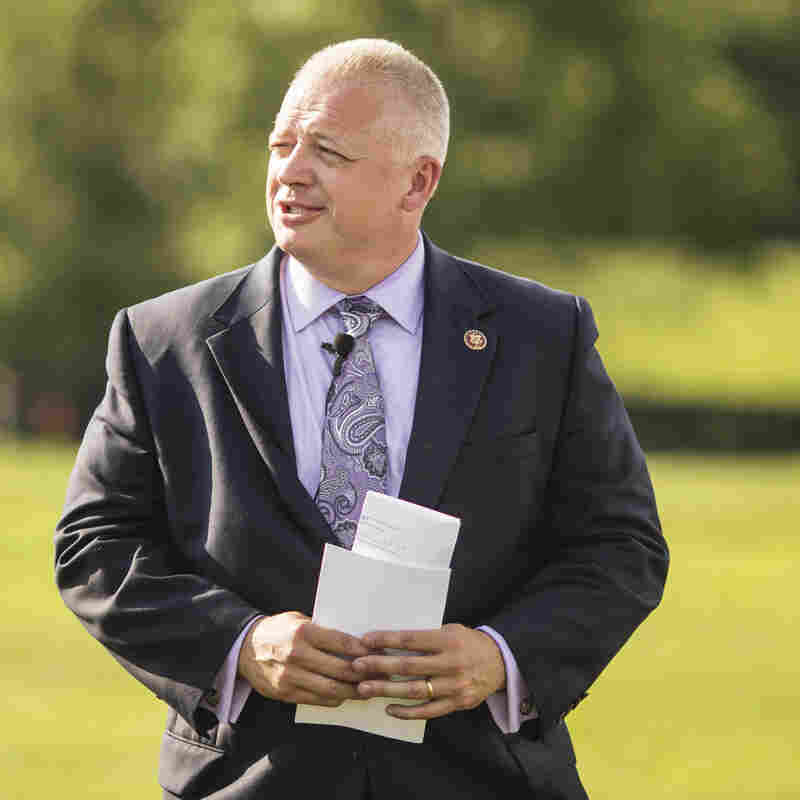 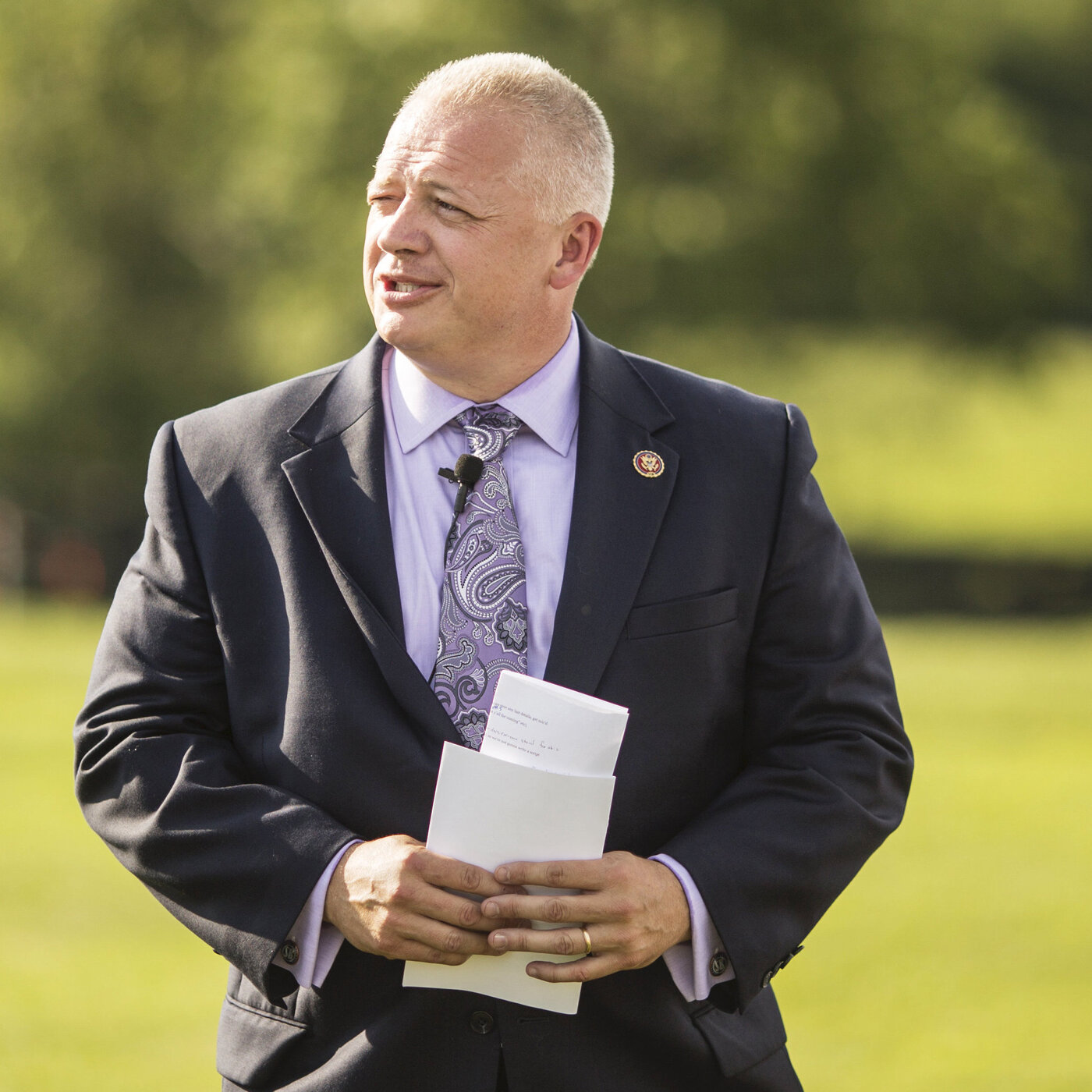 Riggleman was first elected to Congress in 2018. If defeated in his primary, the southwestern Virginia district he represents could be a challenge for Republicans to hold.

The risk for those party activists, Kondik said, is that Good could be a less attractive candidate in the general election. Kondik said Republicans already have an uphill climb retaking the House of Representatives. If the GOP has to spend money to boost Good in a district that Trump won by 13 points, he thinks that climb could be even steeper.

“They seem very caught up in this gay marriage issue when I think a lot of Republicans — and a lot conservatives — have moved on from it,” Kondik said.

On key votes related to LGBTQ rights, Riggleman has also stuck to the party line. He voted against Democratic efforts to enshrine sexual orientation and gender as protected classes in anti-discrimination law, and voted against a resolution that condemned Trump’s ban on allowing transgender people to serve in the military.

Republicans haven’t won a statewide seat in Virginia since 2009 — a reflection, Kondik said, of their unwillingness to elect more moderate candidates that would be palatable to a diversifying state.

For months after the wedding, Pisciarino and LeCounte were flooded with messages. Some people questioned their conservative credentials, calling them “sodomites,” and arguing that same-sex couples could not constitute a family.

Others, however, told them that getting to know the couple had caused them to turn a corner. For LeCounte, the aftermath strengthened his resolve to re-elect Riggleman to get out a message: “You can support LGBT equality and still be a staunch conservative, and, surprise, surprise, get elected and win elections.”

First, Riggleman has to clear Saturday’s convention vote. The decision to hold a convention rather than a more open primary was made by a powerful district committee. Two members of the committee have received payments from Good’s campaign.

“There’s nothing wrong with people on the district committee supporting or working for candidates,” Good told Charlottesville talk radio station WINA in an interview in April. “All it has to do is be disclosed.”

Riggleman said the party convention process is corrupt and said he would not commit to endorsing Good if he’s defeated.

“They know they can’t beat me any other way,” Riggleman said. “Anywhere else, that would be called bribery.”

Some Democrats see an opportunity. Four candidates have lined up to take on the winner of Saturday’s convention. All have raised more money than Good but not Riggleman.