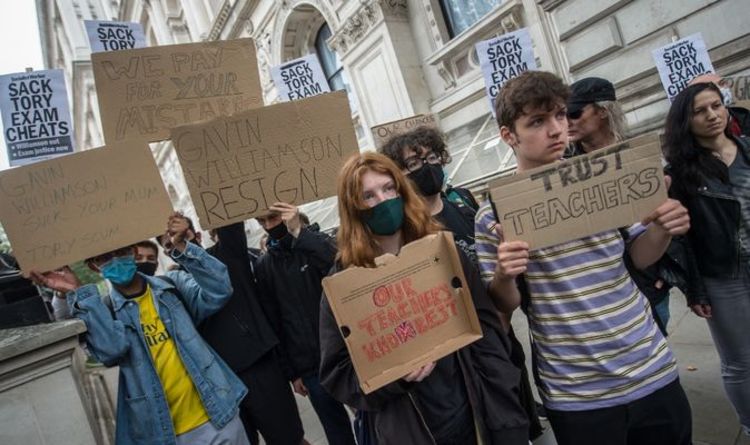 As the row over downgraded A-level results rumbled on, around 100 demonstrators gathered outside Downing Street, chanting “sack Gavin Williamson”.

Harry Mayes, from Stoke Newington, north London, missed out on a place at both his firm and insurance university places after receiving A, B and C in his A-levels.

The student, 18, who had been hoping to study neuroscience at Bristol, said: “I’m a free school meals student and it seems people like me have been lowered the most.”

Naz Malik tweeted: “I have a suicidal daughter who hasn’t stopped crying since 8am. She has missed out on her firm offer due to 2 grades being downgraded. Her centre assessment grades were A* A* A. She got A A* B.”

Furious headteachers hit back at the exams regulator after it suggested the blame for the A-level results fiasco could lie within the schools themselves.

The Office of Qualifications and Examinations Regulation (Ofqual) appeared to be shifting responsibility away from the Government when it claimed teachers had submitted “implausibly high” predicted grades.

When hundreds of thousands of students collected their results on Thursday, some 40 percent had been downgraded from teachers’ predictions by an algorithm, official data revealed, sparking complaints from pupils who claimed the system had let them down.

But a spokesman for Ofqual said: “Because the circumstances meant there was no opportunity to develop a common approach to grading, the standard applied by different schools and colleges varies greatly.

“A rare few centres put in implausibly high judgments, including one which submitted all A* and A grades for students in two subjects, where previously there had been normal distribution.”

Despite the backlash, the Government yesterday stood firm, rejecting Labour demands for a Scottish-style U-turn over A-level results.

Labour leader Sir Keir Starmer said: “Young people and parents right across the country feel let down and betrayed.The chaotic circumstances created by the Government’s mishandling of education during recent months mean that a return to teacher assessments is now the best option available.”

But Prime Minister Boris Johnson said: “Let’s be in no doubt about it, the exam results are robust, they’re good and they’re dependable for employers.”

Labour is now calling for an urgent review of the standardisation model ahead of GCSE results next week.

The Equalities and Human Rights Commission has also urged Ofqual to consider the impacts of its decisions, to avoid harming disadvantaged and minority groups.

Last week, MPs voted on a controversial new bill published by the Government. The UK is currently in a transition period that keeps it...
Read more
U.K.

Coronavirus map LIVE: Breakthrough as critical vaccine onto next stage- 60,000 to get dose

The pharmaceutical company has announced the launch of its large-scale, pivotal, multi-country Phase 3 trial (ENSEMBLE) for its COVID-19 vaccine candidate, JNJ-78436735, being developed by its Janssen...
Read more
U.K.

Armed guards are at a Rotherham hospital after a reported shooting (Image: GETTY)South Yorkshire Police were called to Park Lane in the Thrybergh area...
Read more
U.K.

The UK has left the EU - and that means the guarantee of free mobile phone roaming throughout the EU, Iceland, Liechtenstein and Norway will...
Read more
U.K.

Boris hits out at Covid rule breakers and warns 'your cough can be someone's death knell!'

Boris Johnson addressed the UK in a pre-recorded speech regarding the current coronavirus crisis and increase in cases across England. This speech comes after...
Read more