A modern touch to Islamic chanting 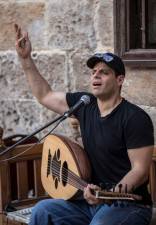 EGYPT’s Mahmoud al-Tohamy is a master of Islamic chanting, a 1,400-year-old art form known as “inshad” – but that hasn’t stopped him from performing the Game of Thrones theme song.

At age 41, Tohamy is inspired by the mystical Sufi branch of Islam and deeply committed to the spiritual essence of the ancient performance of devotional poetry and odes.

But he has also earned global renown as an artistic pioneer who fuses inshad with other styles to create experimental and mesmerising works of music.

While the strictest interpretations of the art of chanting bans the use of accompanying musical instruments, Tohamy has worked with Western-style rock bands and classical music orchestras.

His latest projects, he told AFP in Cairo, are all about mixing “classic Arabic with popular music,“ including genres from rock and pop to house.

“I have mixed the art of traditional religious singing with touches of other Western and Eastern music,“ said the master.

“We will be able to spread the classic Arabic in the West as well as in local youth culture,“ he said of the chants, or “anasheed”, which are traditionally performed solo or a capella.

“Western and foreign audiences have an ear for inshad, more than local audiences. They may not understand the words, but they certainly feel the music.”

Tohamy was born to a family of religious chanters in the southern governorate of Asyut. His father was the singer Yassin al-Tohamy, one of Egypt’s most beloved religious artists.

Tohamy has since 2014 run a music school in Cairo to pass the religious artform on to a new generation.

Teaching a class recently, he wore a light summer shirt, denim shorts, a cap and sunglasses, rather than the traditional loose robes and turban.

“Here I am among my children and young chanters, who may perceive the turban and robes with unease, which could impact our interactions,“ he said.

He now reserves the traditional attire for more conservative audiences, such as in the rural Upper Egypt regions, he said.

He recently held a class – including young men, women and even children –in the spacious courtyard of the Mamluk-era Prince Taz Palace in central Cairo.

There, their languid chanting echoed from the palace’s murals bearing intricate inscriptions of Kufic calligraphy and vibrant Islamic art.

So far nine groups of students have graduated from the school after attending classes on melodic science, rhyming prose and Arabic phonology over a period of four to six months.

“Our school welcomes everyone with talent from all ages, nationalities and races,“ Tohamy told AFP.

Inshad has meanwhile gained ever more fans abroad, as has Tohamy.

Over the years, he has performed at international music festivals with the aim of “reintegrating religious chanting in humanist art”.

In 2017, he collaborated on three songs for the US album “Origin” which won a prize at the Global Music Awards.

Several of his youthful graduates performed on the French TV talent show “The Voice Kids”.

They had planned to perform in Italy and Norway, but the shows have been delayed by the coronavirus pandemic.

During the gathering at Taz Palace, he asked students to perform to the score of the blockbuster television fantasy series Game of Thrones.

Tohamy emphasised that students must be devoted to the essence of the musical form, and not give in to the trappings that come with its growing international appeal and commercialisation.

“It has become common for professional religious singers nowadays only to rely on talent and experience, without proper knowledge,“ he said.

Tohamy described himself as “a lover of Sufism”, which includes ritualistic dancing, singing and the recital of prayers and is decried by some fundamentalist branches of Islam as “heretical”.

The master chanter, however, said that Sufi Islam and its art forms have “played a major role in correcting beliefs and ideas in times of extremism, violence and terrorism”.- AFP