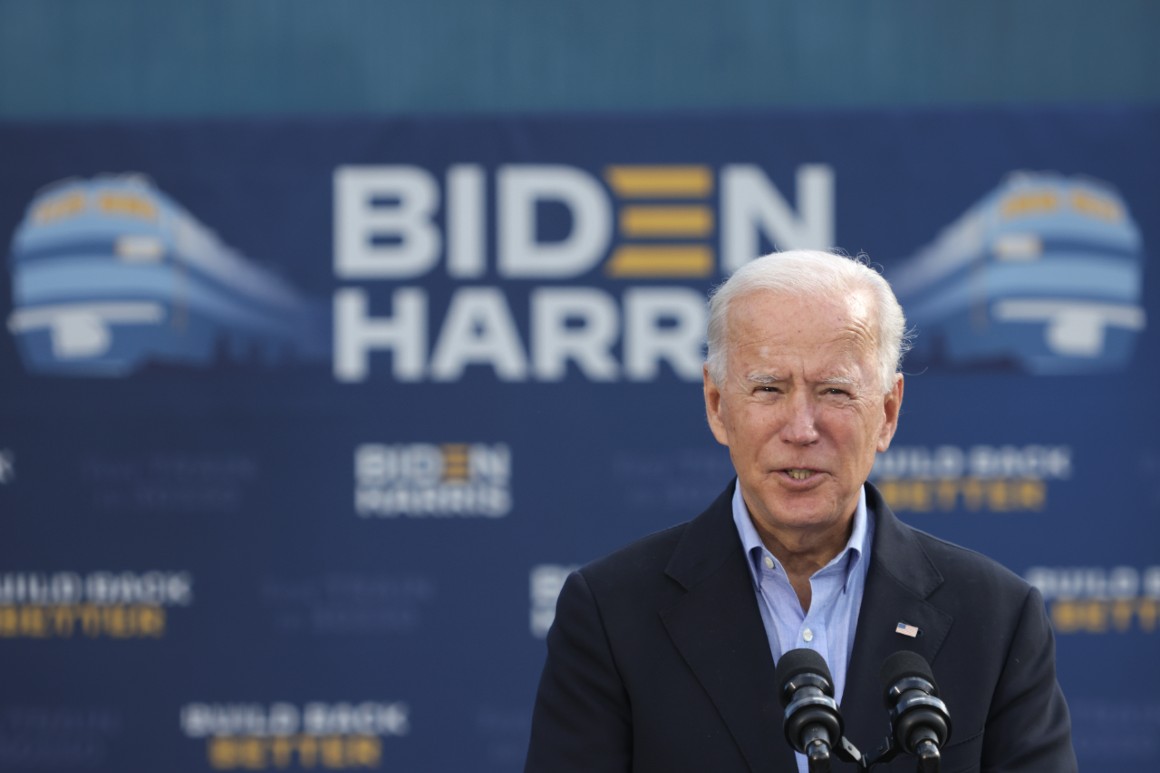 Biden conceded when asked by a reporter that he could “understand” if there were some undecided voters who watched the previous night’s debate and were turned off by the chaos of it all. He then scolded the president.

“Maybe I shouldn’t say this, but the president of the United States conducted himself the way he did — I think it was just a national embarrassment,” he said. “I just hope that the American people and those undecided voters try to determine what each of us has as an answer for their concerns, and allows us to actually speak.”

Biden, who wore a hat bearing the name and logo of his late son Beau Biden’s charity to combat child abuse, went on to say that he hoped he had been able to cut through the noise of Tuesday’s free-wheeling debate, and “tried to speak directly to the camera to the American people, to talk about their concerns.”

He accused Trump of having “no plan, no ideas” to mend a divided, hurting country, contending that the lack of substance offered by Trump “made me realize that just how much is at stake.”

Earlier in the day, Biden sought to pivot from the chaos of the previous night’s debate by largely ignoring it and trying to shift the focus back to his core campaign message.

“Last night’s debate — and this election — is supposed to be about you,” Biden told an Ohio voter whose autoworker husband had lost his job and was forced to accept a transfer eight hours away.

Speaking at a Cleveland train station, the Democratic nominee stuck mostly to his usual script, casting himself as a champion for working-class Americans and President Donald Trump as ignorant to the struggles of blue-collar voters.

He urged attendees to contemplate whether “your president understand[s] at all what you’re going through? What so many other people are going through? The question is, does he see you where you are and where you want to be? Does he care? Has he tried to walk in your shoes to understand what’s going on in your life or does he just ignore you and all the folks all over America who are in a similar situation?”

“I think it’s more than ignoring us,” Biden continued. “I look at things from the Scranton perspective and he looks at them from Park Avenue. I think he basically looks down on us. He judges us.”

The little time paid to the debate by Biden — he declined to answer reporters’ questions about the debate until his second stop — appeared to be a contrast to Trump, who spent the morning complaining about the previous evening on Twitter.

“You know for 90 minutes, he tried everything to distract — everything possible. It just did not work,” Biden said of Trump.

Of the debate commission, which announced shortly after Biden’s criticism that it would roll out changes to ensure order in the next debates, Biden pleaded with the group to “control the ability of us to answer the question without interruptions.”

While he ignored questions about whether there were any circumstances under which he would refuse to debate Trump again, as some have suggested he do, Biden reaffirmed that “I am looking forward” to debating Trump again.