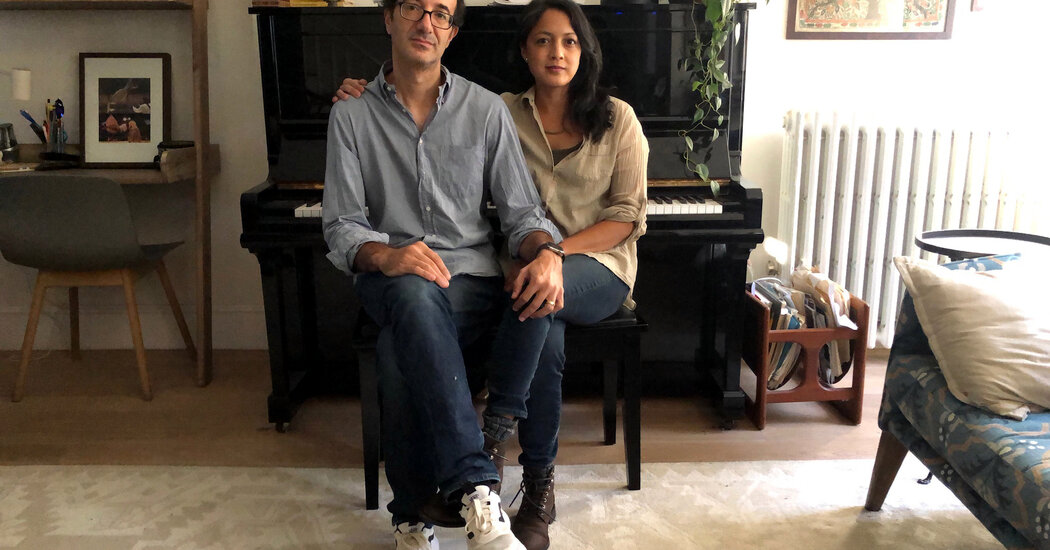 In 2011, Jad Abumrad, the creator and a host of the syndicated radio show and podcast “Radiolab,” won a MacArthur Fellowship, better known to the admiring and the envious as a genius grant.

Appropriately enough, Mr. Abumrad used some of the $ 500,000 prize money to build and outfit a studio on the top floor of the Fort Greene, Brooklyn, house that he shares with his wife, Karla Murthy, a documentary filmmaker, and the couple’s sons, Amil, 11, and Tej, 8.

“It actually costs a lot of money to make something soundproof,” said Mr. Abumrad, 47. “I couldn’t afford the full soundproofing, so I have a studio that is mostly soundproof. I can still hear the kids screaming in the background.”

Compounding the problem, Mr. Abumrad also neglected to put a lock on the studio door — no, he can’t begin to explain his thinking — “so my kids barge in and interrupt every recording.”

Wait a minute. Inadequate soundproofing? No lock and children at large? So much for this being a genius grant. “A so-called genius grant,” Mr. Abumrad sighed. “Yes, I know.”

Pre-pandemic, he could avoid such distractions by availing himself of the facilities at WNYC, which produces his show. These days, he braces for barging: He’s working full-time at home on “Radiolab,” a show celebrated for its adroit blending of story and sound, as well as on a yet-to-be-named new show for Apple Music.

But there’s a distinct upside. Being right there on the premises, Mr. Abumrad needn’t worry about the consequences of Ms. Murthy’s hobby, now pretty much under control: rearranging the furniture.

“For a while, it was a running joke that every time I’d come home there would be an entire new look to the parlor,” he said. “A couch would be against a different wall. Not only would things be reorganized so I’d hit my shin, but giant furniture that had been on one floor would now be on another floor.”

“Karla’s a pretty small person,” he added, “but throughout our relationship she has been able to move 300-pound objects up and down stairs.”

Occupations: He is the creator and a host of the Peabody Award-winning radio show and podcast “Radiolab”; she is a documentary filmmaker.

A house divided: “One of the things we tried to do was make the bedrooms smaller and the common spaces bigger,” Ms. Murthy said.

The two met as incoming freshmen at Oberlin College in Ohio, but didn’t become a couple until senior year. After graduation, they moved to Brooklyn and initially lived in separate apartments. Their first joint residence was an illegal sublet on the top floor of an industrial building in Williamsburg. Friends referred to it as “the K and J Party Palace.”

“We would have big gatherings where people could share their works in progress,” said Ms. Murthy, 47, whose first feature documentary, “The Place That Makes Us,” about the efforts of community activists to rebuild Youngstown, Ohio (Mr. Abumrad served as executive producer), is slated to air next year on PBS. “Jad would share early versions of electronic-music compositions. I would try out art video ideas. And our friends would share everything from puppet shows to short films and music.”

The couple bought their Fort Greene house, a mid-19th-century Italianate brownstone, in 1999, with help from Mr. Abumrad’s mother, Nada, and his father, Naji (a doctor whose friendship with Dolly Parton spurred the star to make a $ 1 million contribution to help fund Moderna’s coronavirus vaccine).

“Half the joists had been cut, and the house was sagging toward the middle. It was a complete dump,” Mr. Abumrad said. But here and there was some of the original plaster molding. It was a propitious sign. So was the slender, arched mirror hanging between the windows in the living room.

“The mirror was what immediately made us fall in love with the place,” Mr. Abumrad recalled. “It connected us somehow to the original state of the house, to the past, in a deep way.”

Since buying the house, which they initially shared with Mr. Abumrad’s cousin and a friend (there’s still an apartment on the garden level for visitors to crash), the couple have charted two renovations. The first, a sort of guerrilla rehab that required multiple late-night trips to Home Depot, was done on the cheap. The second, overseen by Clay Miller of Bergen Street Studio in 2013, was more expansive and more thought-out, including the creation of Mr. Abumrad’s studio, an office for Ms. Murthy, a laundry area and a bedroom for their second son, who had just been born. They blew out the back wall of the kitchen and installed an enormous picture window that overlooks a deck and a birch tree.

“You just look out that window when you’re having breakfast, and you feel you’re in a treehouse,” Mr. Abumrad said. “It’s almost my favorite thing in the house.”

As a final touch, they lengthened the floor-to-ceiling chalkboard that runs along another kitchen wall.

“When we were working with the architects, they were like, ‘Since you already have this, we should just extend it,’ and we really liked that idea,” Ms. Murthy said. The expanded surface offers plenty of room for the children to do math homework and for the adults to list chores and schedules, and to sketch out their story ideas.

The décor is, in part, a nod to the couple’s past. After renovation No. 2, “we wanted to find some industrial pieces to remind us of those early Williamsburg days in the loft,” Ms. Murthy said. Hence, the breakfast table. But the couple also wanted to honor their heritage.

“Jad is Lebanese, and I’m half Filipino and half Indian, and we wanted the space to reflect our cultures and the mishmash of who we are,” Ms. Murthy said.

There are family photos on a stand and on the wall. Vintage National Geographic magazines are stacked on the Yamaha upright (everybody in the family plays), near a wooden Levantine box and Hindu statues.

The curved-back wicker chairs called out to Ms. Murthy because they reminded her of the furniture in her childhood home. She had a Crate & Barrel leather sofa recovered in a Colonial Indian print fabric. “We didn’t want anything to be too fussy,” she said, “because we have two boys and because we have a lot of people coming here.”

The K and J Party Palace, it seems, is alive and well in a new location.

“We’ve had so many of our friends’ baby showers, wedding showers, weddings, birthday parties and fund-raisers here,” Ms. Murthy said. “We want this house to be for whoever needs it. It’s meant to be a welcoming space for anyone to come.”